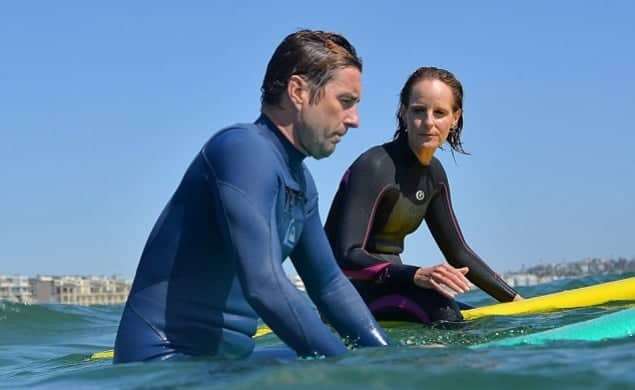 Film Pulse’s Ernie Trinidad recently had the opportunity to sit down with Helen Hunt – writer, director and star of Ride, opening in theaters and on VOD platforms Friday – to talk about her role and balancing writing, directing, acting, and producing duties.

If you would, describe your character Jackie.

I play a very type-A New Yorker, editor of New Yorker magazine, who’s got some serious literary smarts. She is raising her 19-year-old son, played by Brenton Thwaites, who is studying at NYU to be a writer, and the two of them are sort of untenably close and connected to each other and so the journey of the movie is how they kind of redefine their relationship as he grows up.

And Jackie as well?

And Jackie grows up more than he even.

In the writing process were you ever concerned that you might make Jackie a little too unsympathetic?

For sure, in fact I showed the first cut of it to someone I trust a lot. He said, as he was watching it, that he thought, “How am I going to break it to Helen that you just don’t want to watch this person? She’s so horrible.” And then he was very moved by the end for that reason because he kind of misjudged her and had to revise his opinion about her, and those are the movies I like the best.

So this is your second directorial effort, and you took on a jack-of-all-trades job with this one – writing directing, acting, producing. What was it about the script when you were writing it that made you want to direct? Or did you initially decide you wanted to direct and then you found something to write?

I wanted to tell this story more and more as I worked on it; I had a tiny, little, stupid idea to begin with, but then it became something I really cared about. Then, if you bring something that far, you don’t want to hand it to somebody else to finish it. It’s like gestating for nine months and then not delivering the baby or something, so I definitely always had it in mind that I would direct it.

Was it more of a personal interest – the story – because it was something you created?

Because I cared about what the movie is about, like I said, I started off to write a dumb comedy and ended up writing something that I hope is a dumb comedy – in the best way – but also is about, you know, trying to love the world even though the world serves up some really painful things sometimes.

Brenton Thwaites mentioned he auditioned twice for the film.

Which was very cheeky of me because he’s a wonderful actor with an incredible career – he just was nothing like what I pictured at all. I was going to hire a pasty New Yorker who had never seen the sun and was all wrapped up in his head, like she was. And then he walked in and was so wonderful and wanted the part so badly that I thought, “I want this to work, but I did write a story here that I have to get right and so I asked if he would work on a couple of things. He did, and I felt very, very lucky to have him.”

Luke I offered the movie to, thinking he surfed and knowing he’d be perfect for it, and then I found out he was perfect for it but didn’t surf. I just thought there was no way at all to learn how to handle the board that way in a couple of months, and he somehow did it; he’s a real athlete and a really good actor, so those two together allowed him to do it.

And you had a great comic relief with David Zayas…

Yeah, he was just so beautiful; he was the only person I ever considered seriously for the part. He just got immediately that he was sort of the scarecrow to her Dorothy, you know looking out for her.

In theory I do…I’m a very fair-weather surfer. It’s gotta be warm and not too big, nothing too sharp on the bottom, but when it all lines up just right, I love it.

And you did all your own surfing in the film. Were you excited that you were able to get yourself on the board and how long you were actually able to stay on while you were filming?

Yeah, I mean, I surfed bigger waves than I would on my own because I had all these water safety guys around. I would whine at them and say, “I’m not sure. This is too big.” And they’d say, “You can do it.” Then I got up , and thank God, they were shooting.

What were the challenges of shooting in the water?

You know, on land like they’re gonna kick you out at 1 a.m. because you don’t have a permit and then the air conditioning break so the crew is sweating. There’s a hassle wherever you go; at least in the water, we were having fun and playing around like little kids.

Did you have a static camera in there? It seemed like the camera is well mounted.

different at different times, like the more somber sequence at the end. That, I’ll say without giving anything away, we had on a stabilizing head on a mini boat, and then for other parts, it was just a guy in his flippers with a camera in a box.

Well I’m both, I was born here and grew up then came back here.

In the film, Jackie is so pro New York and so anti L.A., and then when she gets out here, she just throws out every stereotype of what non-L.A. people think of L.A.

I mean I grew up in both places, and what I find is that New Yorkers love to rag on L.A. and people from L.A. don’t really need to bother ragging on New York <laughs>. I just think it’s interesting. The people I grew up with in New York, some of them, this character was based on love to tear it apart, so for that reason I think I made it sort of a valentine to Los Angeles.

Now that you got another movie under your belt – it’s been six years since your last one – do you think it’s going to be that long again before you decide to do another one?

Probably, as I look at it and how long it takes to get the rights to something, it doesn’t happen quickly for me.

And which part of your career do you prefer – the directing side or the acting side? Or is it too soon to tell?

Yeah, I don’t ever want to not act; it’s very good for me. It gets me out of my head and my safety zone and into my body and my heart. Directing comes a little more naturally to me, just planning everything and controlling everybody’s everythings comes easy, but I love acting more than anything so I hope to have to never choose.

And you’ve been in the industry for most of your life, so were there any particular directors that you worked with who you pulled from?

Yeah for sure, Jim Brooks for sure. I see how my movie is a wannabe of his movies. He looked at both my movies and gave me notes, which was lovely, so if I had to pick one it’d be him.

When the film comes out what do you hope audiences take away from it?

I hope that they laugh and cry – mostly laugh – and I hope that they give themselves a break, go play more. Put down the phone and go play more. I had a scene in the movie I cut, where she reaches down to pick up a piece of sea glass, and her phone goes in the ocean. You just see it go dead. It got in the way with some part of the movie, so I had to cut it, but I’d like people to put their phone down for a minute.

Be sure to check out our interview with Helen Hunt’s co-star in Ride, Brenton Thwaites, here.

Ride will be available in theaters and on VOD platforms May 1st. Follow Ernie Trinidad on Twitter at @filmmavenblog