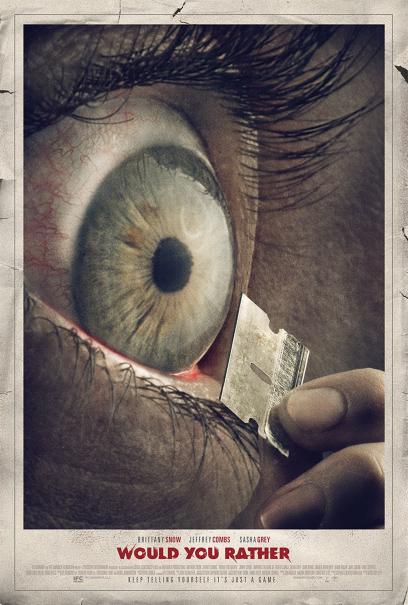 David Guy Levy’s latest film, his first foray into the psychological/thriller genre, Would You Rather opens this weekend in a limited theatrical release as well as VOD.   In it a group of strangers are invited to attend a rich aristocrat’s dinner party and find themselves forced to play a sadistic game of “Would You Rather.”   The cast features Brittany Snow, Jeffrey Combs, John Heard and Sasha Grey.   The film is being marketed as a horror movie but I like to think of it as a thriller.   It’s a very taught but gruesome thriller that surprisingly lacks in blood and gore.   I was quite surprised to find I rather enjoyed it.

This evening at the Laemmle NoHo7 in North Hollywood, CA, director Levy, star Jeffrey Combs and cinematographer Steven Capitano Calitri participated in a brief Q&A after a screening of the film.    The predominantly male audience definitely enjoyed the film as you could hear the laughter and gasps at the various insane acts that befall the characters.   Topics discussed included a talk about the ending, the acting and in one amusing moment when someone stated they looked on IMDB and asked how it was working with Jeffrey Combs.  I’m not sure if the guy was joking or if he really didn’t know that was Jeffrey Combs standing there.   Having done some acting myself I did ask Mr. Levy a question.  I wanted to know if his actors were where they needed to be performance wise on the first take or did he have to coach them along as each round unfolded.   He said during the first game he did have to provide some coaching but after that everyone knew where they had to be and they were able to maintain that throughout the shoot.

Afterwards Levy was more than happy to stop by and say a few words about the film, showing it in a theatre with an audience and reaching an age group he never had before.

David Guy Levy:  Well, you know, we’ve had like three advance screenings and the premiere in October so you know at this point the thousands of people that have supported us have seen the movie. <chuckles> So this is, this is really just, it’s great to come in and not know anyone in the audience…

DGL:  …and see that, you know, twenty people they’re getting it.   You know like I came in the last twenty minutes and watched some of the tensest stuff and everyone was laughing at the right places and going… <gasps>

DGL: Cringing in all the right spots.  So it’s great to see that energy exist on all levels.

ET: …and it’s almost kind of difficult to even qualify this as a horror movie.

ET: Because during the Q&A you were mentioning it felt like Ten Little Indians or 12 Angry Men.

ET: And the fact that you restrained from showing the gore.

ET:  Really made it more of a suspense/thriller then anything.

DGL: Well, yeah I always looked at it as a psychological/thriller and I think it fits in the horror genre for marketing purely because people want thrills still and there are definitely those.  But it’s a movie about, you know, a real situation.  People who could be real and I think that during the Q&A I mentioned that it was about the haves and have-nots.   And these people have no… nothing, they can’t buy a good time (so) they have to come up with it.  So they come up with this really sadistic game.

ET: I was wondering where that came from and did that bring you to decide let’s make it out of the game “Would You Rather.”

DGL:  Yeah, no that was the first thing we had was the title and then we wrote the story.

DGL:  Exactly it was just thinking of what we would do with different situations and then finding a structure where we could tell the story and carry a game where it got more intense as it went along and it didn’t slow down.  There’s a movie that we watched called 13 Tazmeti about a game of Russian roulette which was very similar in how it builds and builds.  That’s the movie.  So we definitely wanted to keep a similar tension to that.

ET:  Cool.  It was quite refreshing because you’re like “Oh not this again.”  I was hearing rumors it was torture-porn but…

ET: It must have felt good to know that you really were getting to your intended audience…

ET:  …and that they were feeling what you wanted them to feel.

DGL:  It’s been nice.  I’ve been watching, because it’s on VOD now too, so I’ve been watching people live Tweet as they watch.  Like teenagers.   You know they tweet every second of their lives and I have never had this audience before.   So it’s just been fun to see kids glued to their smartphones talking about the movie as it’s unfolding.   So I watched live tweeting at this thing.  It’s crazy.

ET:  Now that I think of it let’s hope we don’t have any copycats in real life or anything.

DGL: Ugh, I hope not.<laughs>It would be a fun game, Delta Delta Phi.

ET:  Well that’s not the legacy you want to leave.

DGL: Well, thank you very much.

ET: No, thank you.  Thank you for taking the time.  I appreciate it.

Levy isn’t sure about what he’s going to do next.  If he gets the financing he’d be happy to go for another round of  “Would You Rather.”    I really like that Levy truly appreciates having his films shown before an audience as opposed to at home.

Being the film has a scope aspect ratio a giant theatre screen may be the best place to see it.   Especially since there’s nothing more enjoyable than hearing your fellow audience members laughing then gasping at the horrors on screen.   So check your local listings for a theatre near you or catch in on VOD.    In the meantime, how about a game of “Would You Rather?”