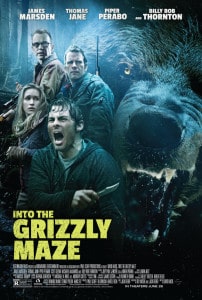 The “when-animals-attack” genre can often times be depended upon to deliver diverting entertainment. Pure and simple, as viewers we just want to see people getting attacked.

For decades, there have been films about countless animals – sharks, snakes, rats, dogs, wolves, bugs, spiders, bears, ants and even beavers – the list can go on and on. What they all hold in common is that the lead characters come face to face with said animals and must find a way to stop them. Meanwhile innocent bystanders get mauled or eaten in the process.

Now if filmmakers can manage to squeeze in an intriguing storyline and some engaging characters (i.e., Jaws or Piranha), perhaps this little diversion can prove to be even more entertaining beyond simple blood lust. Take a film like Anaconda – a ridiculous premise, not meant to be taken seriously, but still a fun film overall. Unfortunately, director David Hackl’s recent effort, Into the Grizzly Maze, finds itself stepping into way too many bear traps.

An Alaskan community finds itself under the wrath of a massive grizzly bear that has begun attacking people in the forest. At the behest of the town sheriff, two estranged brothers set out into the vast wilderness to find and stop the bear in a humane fashion if they can, but a local hunter has other plans for the beast.

This film features a cast of well known actors, and they have all shown that they can act. However, the ensemble is wasted in a film that clearly hoped to be at the caliber of Jaws or a much more serious take on Grizzly, the 1976 thriller about a killer bear. 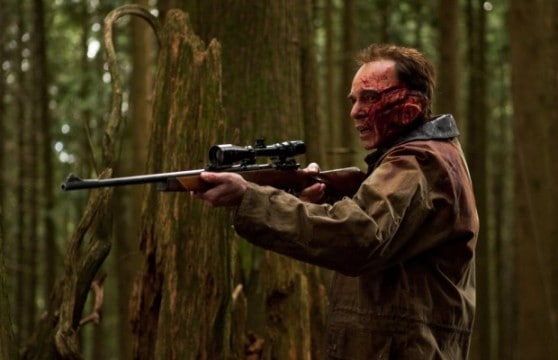 The film stars James Marsden and Thomas Jane as the brothers, Rowan and Beckett, respectively. Piper Perabo and Michaela McManus star as the damsels in distress, one of whom happens to be deaf. Billy Bob Thornton plays the great white hunter, Douglass who actually says the words “this is not your average bear.” Scott Glenn appears as Sully, the town sheriff who shares a similar arc to a character that Glenn previously played in a far superior film.

Unfortunately the performances by Marsden and Jane weren’t very convincing, and I didn’t buy them as brothers. In fact, it really felt like all the actors were just placed in front of the camera and told to perform without being given direction by Hackl (Saw V). Thornton’s character is just short of calling this bear “Yogi,” and it eventually becomes hard to take the film too seriously.

The story was created by J.R. Reher, and the screenplay was written by Reher and Guy Moshe. On paper, perhaps the story had some weight to it, but as it was presented, it simply was not very compelling and definitely dragged on throughout its runtime. One definite upside, however, was how cinematographer James Liston captured the beautiful Alaskan wilderness.

Not every film can be a Jaws, Piranha or even something like Shakma, but it would be great to have something come along to at least attempt to follow in those lofty footsteps. Into the Grizzly Maze was a nice try but fell way short of the mark, and after its rather hokey conclusion, you’ll be ready to have this one sent to the taxidermist.