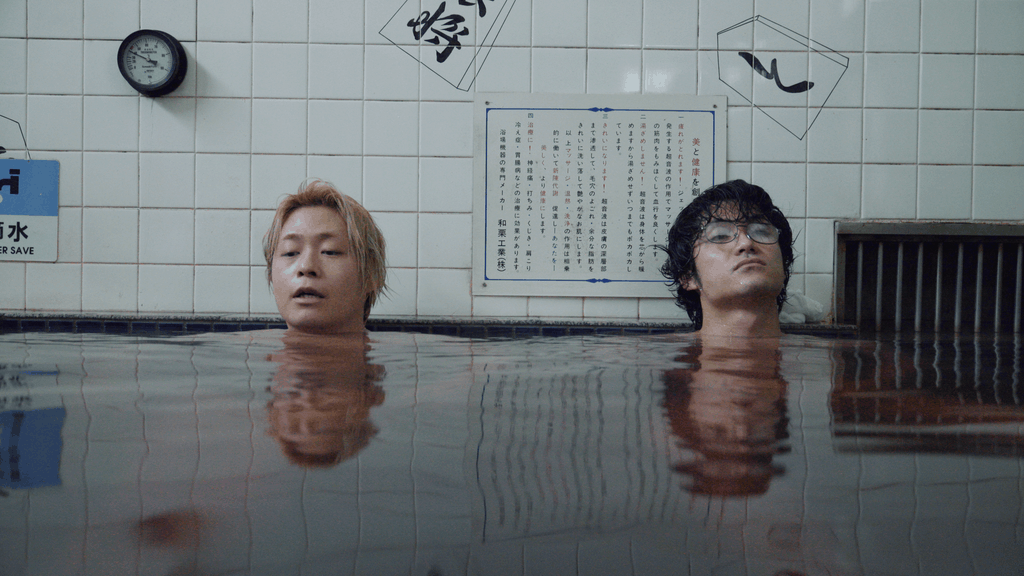 As a fellow post-grad with a tremendous amount of expectations placed upon one’s imminent future, I found an uncomfortable resonance with the aimless, eternally wandering Kazuhiko, the twenty-something main character in Seiji Tanaka’s debut feature. A graduate of the prestigious Tokyo University who moves back in with his parents and starts working part time at a bathhouse, Kazuhiko is for all intents and purposes a failure whose youthful rut and the quiet indifference it inspires in him makes him a protagonist with an embarrassing amount of relatability for people in my age bracket.

Melancholic oddly depicts him as content, to some extent, with this mundane groove he finds himself in as he spends his days silently wasting his supposed potential, mopping saunas, washing towels and doing absolutely nothing with his degree, of which his friends and family are very quick to remind him he has. His utter lack of direction makes him atypical from a Japanese perspective, a culture which fosters staggeringly high graduate employment rates, yet his despondency over an unknowable future reinforces Kazuhiko as a Millenial everyman just happy to have a semblance of stability. 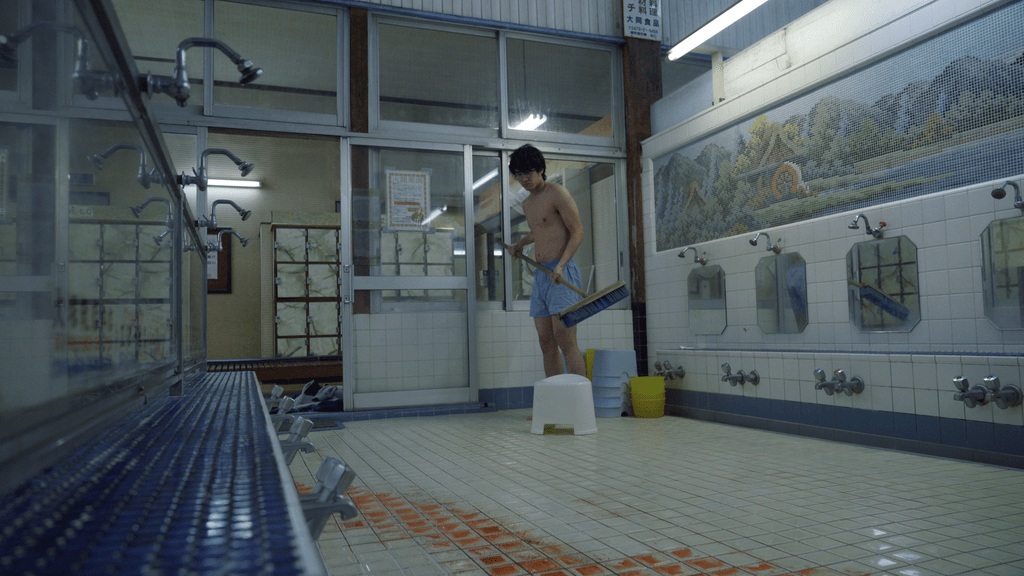 Then the murders start, and Melancholic grows from a run-of-the-mill, “woe is me,” young-adult drama to a quirky, endearing character study grappling with the value of said stability in the first place. As it turns out, the discreet, simple bathhouse where he works also happens to be owned by a gangster who has his hitmen utilize its facilities as a prime location to kill and dispose of targets.

Kazuhiko stumbles onto this revelation one day and is forced into the arrangement as the cleaning crew, and to the surprise of everyone, he enjoys the new sense of responsibility that comes with it. Body disposal comes to be something he takes pride in and, as he gets more and more invested in his second job, the world of organized crime encroaches on his life aggressively to remind him how over his head he truly is. 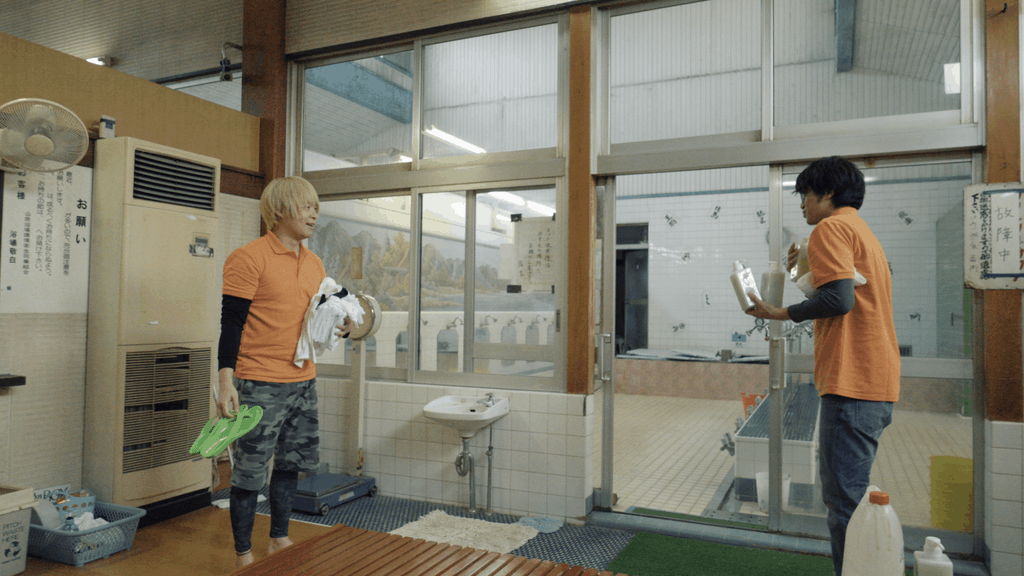 Kazuhiko is a strange but fascinating character who covets his job, not because of the thrill attached or the adrenaline of fear involved, but because of the prospect of stability in his life. If he is scrubbing the gangster blood off of the tiles of a bathhouse (all shot expertly by Tanaka, with a sterile sense of restraint that later underlines how trapped Kazuhiko gets), he doesn’t have to worry about his wasted diploma or his more successful friends.

Melancholic channels that youthful tentativeness into an unsuspectingly gritty crime story for a surprisingly sympathetic treatment of its central character and his quarter-life anxieties. Even as Tanaka unreels more complexity to his plot and indulges in sinking Kazuhiko into the criminal underworld, to the point where he is participating in a bloody regime change for his local Yakuza, the film remains grounded and surprisingly endearing.

There is a sensitivity to his descent into the criminal world, played with both bumbling fish-out-of-water humor and nightmarish dread, as the reality of his situation inevitably becomes unignorable. Melancholic is a solid balancing of these tones — using the perennially in-over-his-head slacker in Kazuhiko as its anchor, whose straight, bewildered performance plays well off of the rest of the cast. 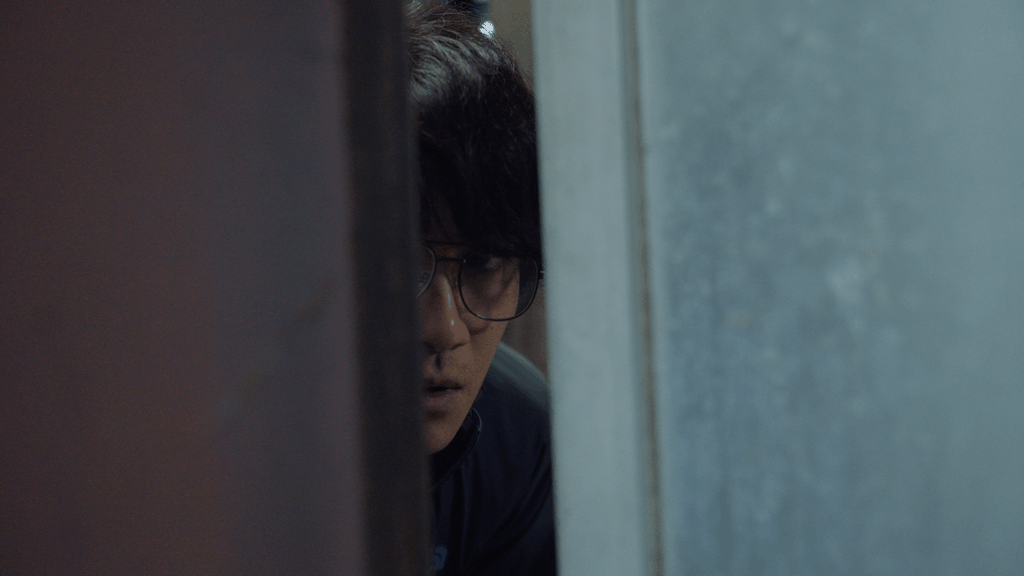 The film seems to reach the rather bitter conclusion that it is better to accept your lot in life and learn to enjoy your rut rather than grasp for higher ground, due to the danger it carries. While that is a downer of a moral, Tanaka did call his film Melancholic, so it is safe to assume this resentful summation of Japan’s lost post-grads is entirely intentional.

Melancholic earned Tanaka the Japanese Cinema Splash Best Director Award at the Tokyo International Film Festival, and it is clear to see why. Handling the disparate tones at hand and finding continually engaging ways to cast the repeating interiors of a bathhouse is an admirable talent which compliments his ability to ramp up the tension in his descent story extremely well. With Melancholic, Tanaka announces himself as a fresh directing talent to watch in the coming future.