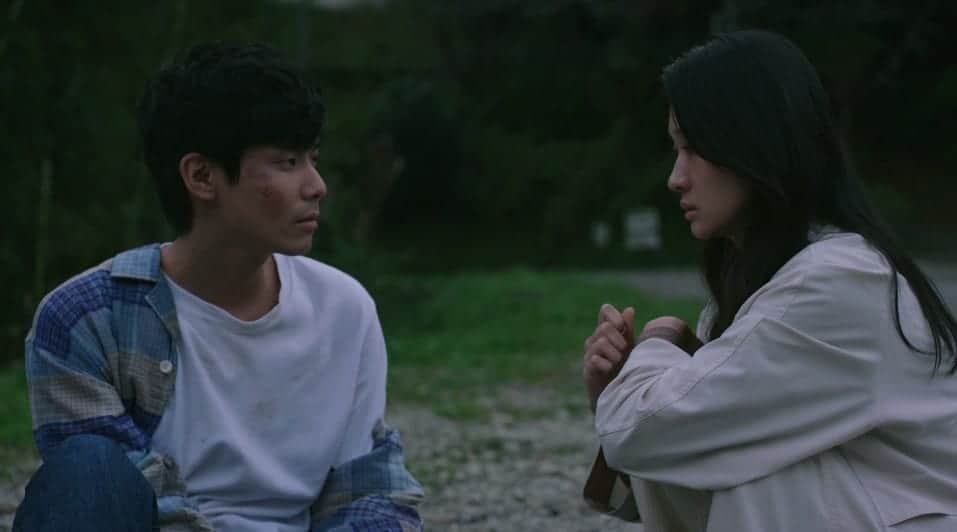 Nestled into a quiet, insular township overtaken by the forest is Sotoko (Saki Tanaka), a woman in the midst of an existential crisis. Living in her ancestral home with her only family and abusive husband Atsuya (Yasuhiro Isobe) and working a menial job, she is trapped in a dismal and suffocating existence.

Prone to wandering the oppressive forest that engulfs her home, she chances upon Mikiro (Kenta Yamagishi) a misanthropic outsider to their community who witnesses her abuse at the hands of her husband and becomes singularly possessed by the notion of rescuing her. Pushing back against the corrupt community which turns a blind eye to her silent suffering, Mikiro and Sotoko partake in an emotional-tug-of war to leave the place that seems to be the cause of all her misfortune.

This is the simple setup to Natsuki Nakagawa’s Beyond the Night, which belies the much-deeper psychological intrigue that plays at the center of its triangle. Filmed as her thesis film, Nakagawa presents this standardized, melodramatic premise of abuse, sexual entanglement and small-town malaise only to peer beneath the surface of her story and into the debilitating contours and flaws of her characters. Although much of Beyond the Night is played with an engrossing placidity befitting the sleepy, small-town atmosphere, the director probes into the festering darkness hidden underneath these rural facades with deliberate and methodical intrigue.

Some of the success of this effectiveness is due to her cast, who exhibit fascinating performances across the board. The praise is rightly placed at Saki Tanaka’s feet. She begins the film portraying an indecipherable victim but gradually unfurls her character through subtle yet essential emotional touches.

The inner turmoil of her character becomes all consuming and more intriguing as Mikiro becomes obsessed when her rebukes begin to read less like the standard replies of a long-suffering abuse victim. There is nuance breathed into her at-times frustrating behavior and, by the time we reach the climax, her actions still seem mysteriously unknowable due to Tanaka’s great performance.

Paired with her is Kenta Yamagishi’s Mikiro, who is equally mysterious but with a much more sinister edge. His entire character arc seems like a descent further into unsavory, possibly obsessive behavior, fully justifying the suspicion and hesitation the community pays to him when he arrives.

Far from being the bland do-gooder who saves his damsel, Yamagishi plays it kind of like a sociopath who claims his intentions are pure but can’t hide the threatening atmosphere he pushes out. The dynamic between the two, wherein the power seems to shift arbitrarily between them as they slowly learn more about each other and form this indescribable bond, is engrossing to watch unfold over the course of the film. Played subtlety and with such eerie restraint by the leads, their emotional (and inevitably sexual) back-and-forth anchors the film through its more inactive phases.

The entire film exerts this restraint over its form as well, as Nakagawa shoots this rural township with a stillness bordering on overbearing. Granted, much of the film plays out internally between the two leads, but Beyond the Night is the type of slow burn where you really expect something to elevate in the climax. Rather, Nakagawa settles further into the dull roar that her film has been exerting the entire runtime.
An auspicious debut, Beyond the Night becomes the more enthralling the more you let it simmer in your head. It’s subtle performances, lethargic pace and fascinating characters give it such staying power that it overcomes its well-worn premise.