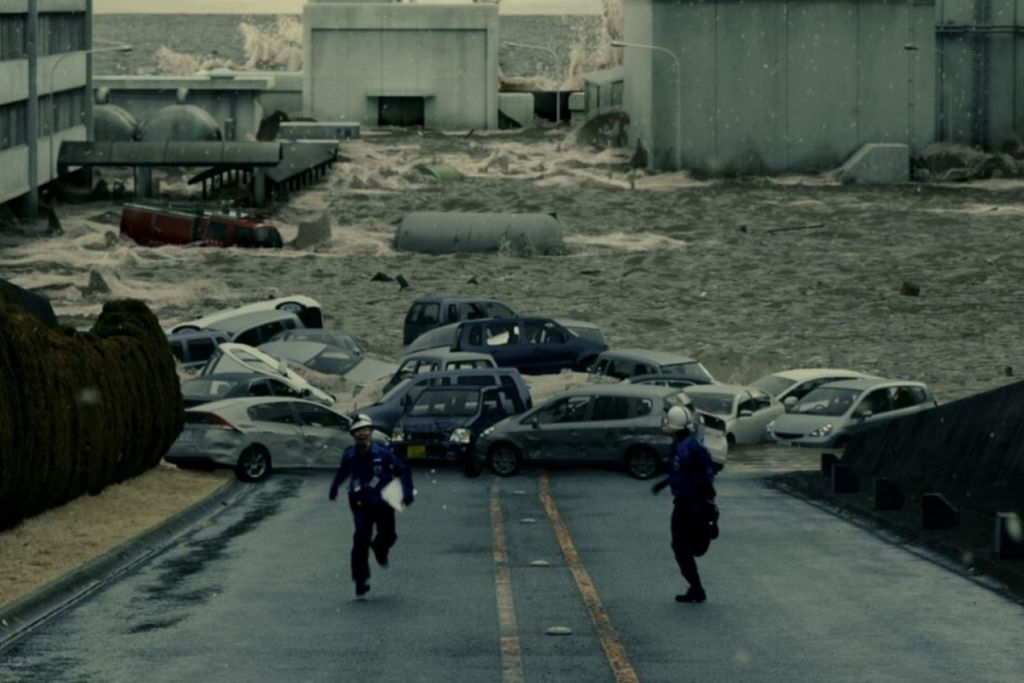 To say that Japanese cinema has failed to address the Fukushima-Daiichi nuclear disaster is an understatement. The fallout of 3/11 has been well dissected in the cottage industry of documentary films after its occurrence, and has been integrated into the margins of many fiction films through character backstories or slight references.

Setsuro Wakamatsu’s Fukushima 50, releasing nearly a decade after 3/11 rocked the coastal regions of Japan, is in no way the first to address this overwhelming moment in Japan’s contemporary history, but it is the first to adapt it directly. Long treated as a taboo subject that no large studio would be willing to touch, what happened in the Fukushima-Daiichi nuclear plant on March 11th, 2011, now has a direct dramatization, thanks to Kadokawa Daiei. But, thanks to an abundance of disaster-film cliches and hollow melodrama, doesn’t feel like it is saying anything at all.

Based on the nonfiction book by Ryusho Kadota, Fukushima 50 endeavors to offer a faithful timeline of how the employees of the Fukushima-Daiichi plant worked tirelessly to contain the disaster from being much more damaging than it could have been. After the Tohoku earthquake and tsunami, the cores of the plant threatened to melt, prompting 750 employees to be evacuated while 50 remained behind to control what they could.

At the forefront of Wakamatsu’s film are Toshio Isaki (Koichi Sato), the plant supervisor, and Masao Yoshida (Ken Watanabe), the site superintendent, who both monitor the situation from inside and outside the control room and serve as our protagonists. Through this ensemble of Fukushima-Daiichi employees willing to sacrifice themselves for the good of the nation, Fukushima 50 aims to tell a tale of heroes answering the call when the unexpected begins to happen.

Granted, it is a noble goal, but so much of Fukushima 50 is bogged down with the same, tired cliches of the disaster genre that, just because they are being applied for the first time to this disaster, does not make them seem any more fresh. Yes, when told the mission to vent one of the cores is likely a suicide mission, the entire crew in the control room raises their hands to volunteer.

Yes, Yoshida’s only character traits are his constant shouting voice and his disgust with having to do things by the book. Yes, the government, in the form of a curt, nameless Prime Minister (Sano Shiro), is unfeeling and cannot comprehend the humanity involved in the rescue mission. Yes, Isaki has a family, one he’s been fighting with and one to whom we cut throughout the film, and the disaster makes him reconsider his ways. If you’ve seen any disaster film in the past two decades, then nothing that Fukushima 50 does in trying to adapt 3/11 will get much of a rise out of you.

In fact, it will be a shock if it can get any kind of reaction outside of unsettlement and distaste, as Fukushima 50 loads up its supposedly faithful rendering of the Fukushima-Daiichi nuclear disaster with crowd-pleasing melodrama and pap. Rather than using the disaster to bring light to the very real acts of safety violation and negligence that occurred on the part of the government, which the mismanagement of 3/11 brought to light, Fukushima 50 elides over that to tell a bland (if based in reality) story of heroism and self-sacrifice.

The film instead naively pushes the selflessness of all of its cast members, from the titular 50 and the American soldiers who initiated Operation Tomodachi to the townsfolk who evacuate from the directly affected areas, so uncritically and with such a mawkish bend. (There are a litany of sentimental flashbacks wherein Isaki wishes to be a nuclear technician as a boy.) It’s tropes like these that might make one believe after the events of the film everything went back to normal. It seems Wakamatsu’s film was hoping that nine years would be a sufficient amount of time for 3/11 to be so easily digested as mindless blockbuster entertainment.

While the disaster itself, in the form of tsunami waves and tectonic plates crashing into one another,  is depicted with some fairly impressive CGI, and the cast (when they bring down the decibels every now and then) bring a degree of severity to the material, Fukushima 50 just feels hollow. For such a monumentally controversial event to be sanded down into this digestible, mass-entertainment formula of the cliche, disaster-spectacle film feels disconcerting.