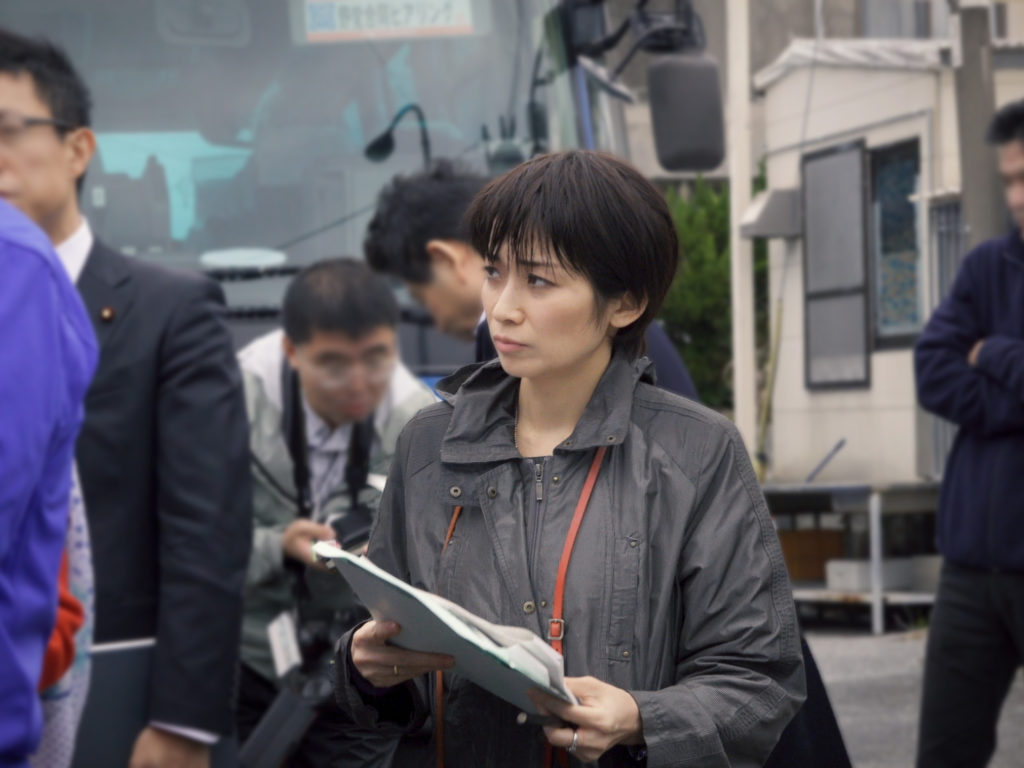 “The latest from controversial documentarian Tatusya Mori tackles freedom of the Japanese press in a dense, challenging manner.”

Isoko Mochizuki has been on the fast track to becoming akin to a “celebrity journalist” in the past few years. Her 2017 memoir The Journalist and the 2019 film loosely based on it by Michihito Fujii have firmly placed her aggressive, question-asking style of journalism and steadfast defending of the press’ freedoms against the government in the public eye and made her a figure of fascination.

It was inevitable that a documentary of some sort would come of her, and it seems like an almost too perfect match that controversial filmmaker Tatsuya Mori would be the one to profile her work in full. Hot off his last film, Fake, profiling fraud Mamoru Samuragochi, Mori seems to be doubling down on his new documentary approach of intimately following polarizing figures and allowing them to explain their experiences in revealing, honest manners.

And follow he does, with his single digital camcorder closely tracking the movements of Mochizuki as she completes her hectic daily schedule working for the newspaper Tokyo Shimbun. i-Documentary of the Journalist drops you into the midst of her efforts to cover developing political scandals involving the relocation of a US Military Base in Okinawa and a case of environmental negligence in Haneko Bay.

We see her unorthodox (for Japan) tactics of travelling to official representatives’ homes at all hours of the night and her signature aggressive questioning style with Chief Cabinet Secretary and spokesman for the administration, Yoshihide Suga, all while her infallible work ethic gives her no second of respite. Mori attempts to follow suit, but a growing subplot of his many attempts to acquire press credentials to film Mochizuki at a press briefing begins to unfurl the focus of the film. Much more than being a profile of an ace, respected reporter with nigh indisputable journalistic integrity, the film widens its net to profile the entire media and its lopsided and groveling relationship with those in power.

Here is where Mori’s film carries its high bar for entry. Unless you are somewhat familiar both with how Japanese media works and have kept tabs on, among many things, the last four or five years of media and political scandals within the country, much of Documentary of the Journalist plays like a dense web of mysterious significance. It is cutting enough in its rhetoric (especially what is supplied by Mochizuki, who perfectly anchors the film) to remain impassioned and outraged in tone, but when it begins to analyze certain details, interview figures, and follow up a history of mistreatment of the press, there is no effort made to hold the audience’s hand.

Have you heard of the Moritomo Gakuen scandal or the Noriyuki Yamaguchi rape case? Mori’s film gives you a primer, but is almost banking on you having followed the story in the press up ’til his film’s release for context. Documentary of the Journalist is nonetheless acerbic and biting because its main focus, Mochizuki, is.

Much of the film is tailored to her experience working as a Tokyo Shimbun reporter for the past two decades, and when she is not rushing around with her wheeled suitcase and having marathon cell phone conversations, she is curt and damning of her industry. Under particular fire are the preferential treatment of the press clubs (once again, some context is necessary for the film) and how they constitute preferential treatment by the government for positive coverage.

It will be interesting to see how Mori’s film plays outside of Japan. While exceedingly well made and pointed, being a profile of an infamous figure most outside of the country may have never heard of — combined with a takedown of a media system that has no bearing in any other country — might limit its appeal.

Certainly, however, it can’t dilute its impact to those familiar or waver in appreciation for Mori’s ability to construct a narrative from this dense media landscape. The most positive thing you could say for his Mochizuki profile is that it makes the indisputable case for it being a necessary endeavor.