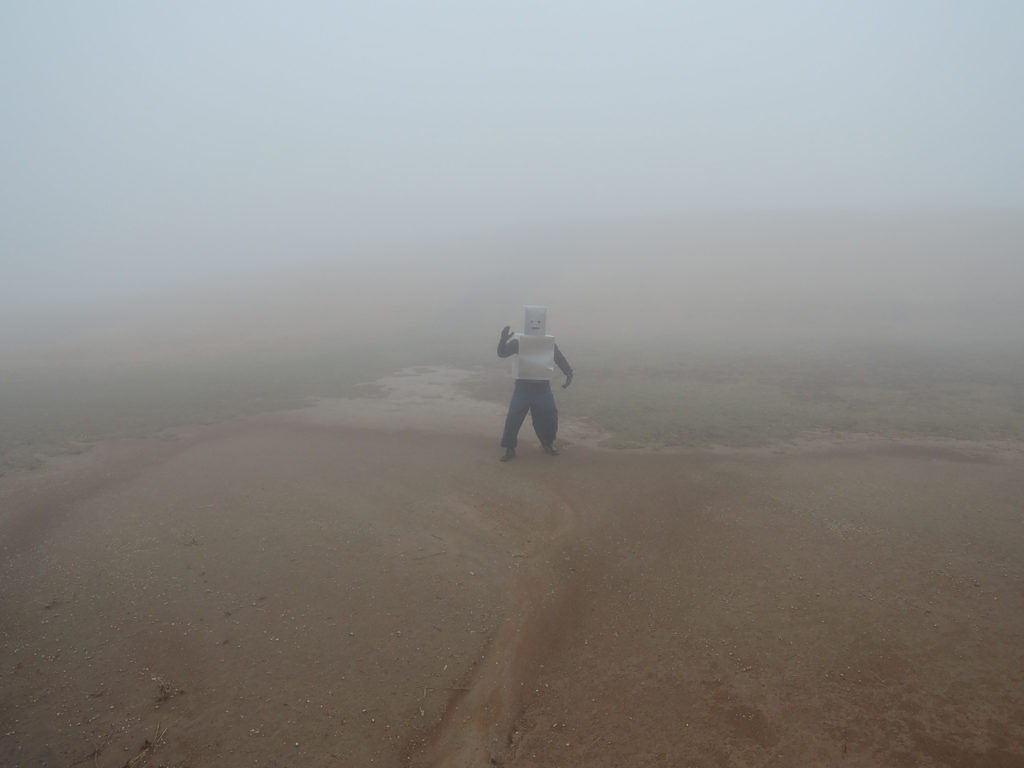 A cardboard-box robot and a raccoon in a red ball cap are good friends despite not having a lot of patience for one another and frequently bickering. They live and congregate in a dense forest, where they enjoy going for walks and taking in the beauty and quietude of their surroundings in their trademark reserved fashion.

They converse frequently about the minutiae of their day-to-day lives and their never-seen circle of companions, and they occasionally opine about heavier topics, such as the purpose of their lives and what it means for something to be truly meaningless. Occasionally, they play around and voice objects and small insects that they come across and dance in a field; they do a litany of minor activities that seem aimed to offset their boredom.

This is essentially all that happens in Takuya Dairiki andTakashi Miura’s Kinta and Ginji, a lo-fi, avant-garde buddy comedy that is as inscrutable as it is unintentionally fascinating. The low-budget, two-man, independent film crew who are responsible for 11 features before this one have crafted a deeply casual, philosophical text that is so hands off and relaxed that it almost feels like improvisation.

The directors, donned in their makeshift costumes, found some fascinating tableaus in the forests of the Japanese countryside, and with a couple of scenes of dialogue and an immutable air of idleness, made a movie. Reminiscent of the lo-fi oddities produced by Albert Birney, specifically Tux and Fanny, this title carries you with its vibe through the befuddlement factor of its premise and delivers a soothing, inactive, brain-stimulating substance that is difficult to describe.

The number of shots that make up Kinta and Ginji can probably be counted on your fingers because the film takes the form of long, static and distanced compositions of our duo, surrounded on all sides by the dense foliage of the forest. Due to the outdated MiniDV that captures these tableaus, most of the viewing experience of Kinta and Ginji is taken up with trying to locate our protagonists in the technical haze of the equipment and the cluttering leaves of the filming location.

Once located, the robot and raccoon don’t do much in terms of action — choosing instead to either wander around the shot or stay still and have the directors’ voices dub over their ongoing conversation. Kinta and Ginji is an impressively inactive film that never really mounts to a climax, as much as it drifts from scene to scene of fatuous dialogue.

Do Kinta and Ginji say anything insightful? Not really. Much of their conversation consists of small talk about their days with the occasional sporadic, introspective talking point. The casual depth of their chit-chat sneaks up on you, due to the entire formal system of the film working to disarm you and leave you in a state where a cardboard-box robot reflecting on its mortality or a raccoon in a ball cap reflecting on what it means to be meaningless can actually resonate quite strongly. Kinta and Ginji has a very peculiar disposition that makes it hard to recommend, as it is so singular and incomparable, yet — through its eccentricity — it becomes oddly compelling.

There is not much to say about Kinta and Ginji that would work in convincing others to see it. Attempting to describe this movie can only leave it seeming horribly mundane and vacuous. It has no higher aspirations or delusions or pretensions.

Kinta and Ginji just is. A bizarre avant-garde comedy where each sensible chuckle comes with a much-needed scratch of the head and an earnest attempt to parse what the overall film is going for.