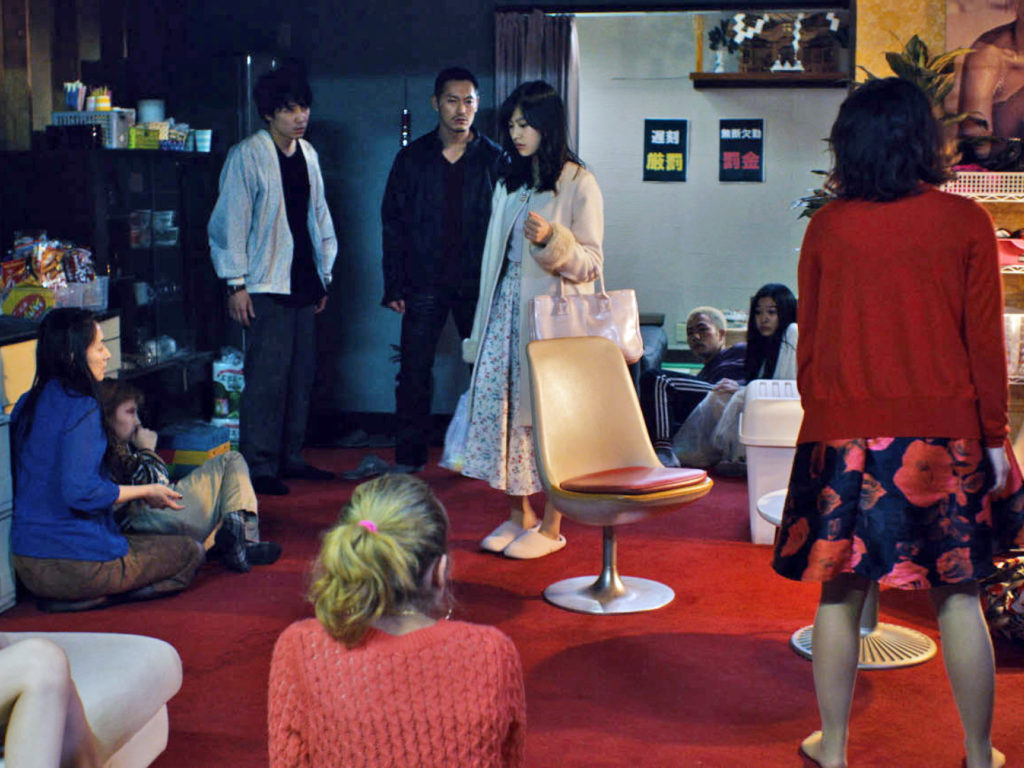 There is no doubt in my mind director Kana Yamada was not in some way attempting to channel the biting humanism and critical feminist rhetoric of master director Kenji Mizoguchi when she was adapting her stage play for the big screen. Aiming to balk the prevailing attitudes ingrained in society like The Life of Oharu and Street of Shame before it, Life: Untitled makes the (sadly) radical claim that sex workers are indeed people too and attempts to paint them with a complexity and nuance outside of the universal derision seen in previous depictions. Some 70 years after the late Mizoguchi’s humanistic portrayals of brothel employees and geishas, Yamada’s film demonstrates how nothing has really improved in terms of labor protection for — or dignity felt among— women in this unregulated industry.

The film centers around an escort service run out of a ramshackle office in Tokyo, where we witness the women in its employ waste their evenings in bored stasis waiting for a call to be whisked away to a love hotel for a job. The foundational personality of the narrative is Kano (Sairi Ito), who applied to be an escort but reneged on her first job and now works as an errand runner for the business.

Dubiously enamored with the business, she watches as the collective of women come together in this office to vent their issues with their work to uncaring and exploitative management, all the while gradually turning against one another. As the outsider looking in, Kano empathizes, but the constant abjection she witnesses her co-workers go through leaves her eternally tripped up by the question of why would anyone choose this work.”

There are plenty of answers to this question, but Life: Untitled is hung up on this notion of “hurt people hurt people” to consistently explain away the turmoil of its cast. You would think perhaps the economic situation of these characters would come into the purview of Yamada’s focus, but her intent is more looking at society’s ingrained misogyny and the dubious claim that only “broken” people enter into this business.

While this does not stop Life: Untitled from filling out its characters with depth and humanity with the cast’s committed performances and Yamada’s incendiary dialogue writing, it seems formulaic that each character in this ensemble would be afflicted by some hangup or character flaw that explains their willingness to be escorts. One is an anti-social introvert; one is a manic-depressive; one is affection starved and immature; one is borderline sociopathic; and the most disturbing one is a middle-aged woman who acts, dresses and behaves like a child.

Yamada aims to portray her characters with an attentive compassion, but in doing so she portrays the industry they work in with broad, nebulous strokes. The film is not so insightful or informative toward the experience of working at these escort offices as it is interested in creating a mood of bitterness and ugliness about them.

It’s a solid point that is valid for Life: Untitled to conclude, but it leaves the film feeling hollow, especially when we consider an overarching narrative is somewhat missing from the film. Characters come and go from the office on jobs, complain to their employer, bicker with one another, start relationships, end relationships, and reveal small details about their personal lives, but the film never feels like it is going anywhere or building to something.

This is partially due to Yamada’s direction. As adapted from her stage play, the majority of the film is confined to the one office, and she never quite shakes the staginess of her presentation or the film’s overall pacing in terms of a very clear and stiff act structure punctuating the film. I have no doubt that this plays better on stage, and one element — the opening monologue delivered by Kano — survives the transition without issue; but overall the film feels very plain and flat.

Despite its good intentions and some stellar performances by the cast, Life: Untitled never overcomes the problematics in its outlook of the sex worker industry or the overbearing rigidity in its presentation. While sympathetic to those in the industry, it never quite elevates this to any revelations that we did not already hear from Mizoguchi all those years ago.