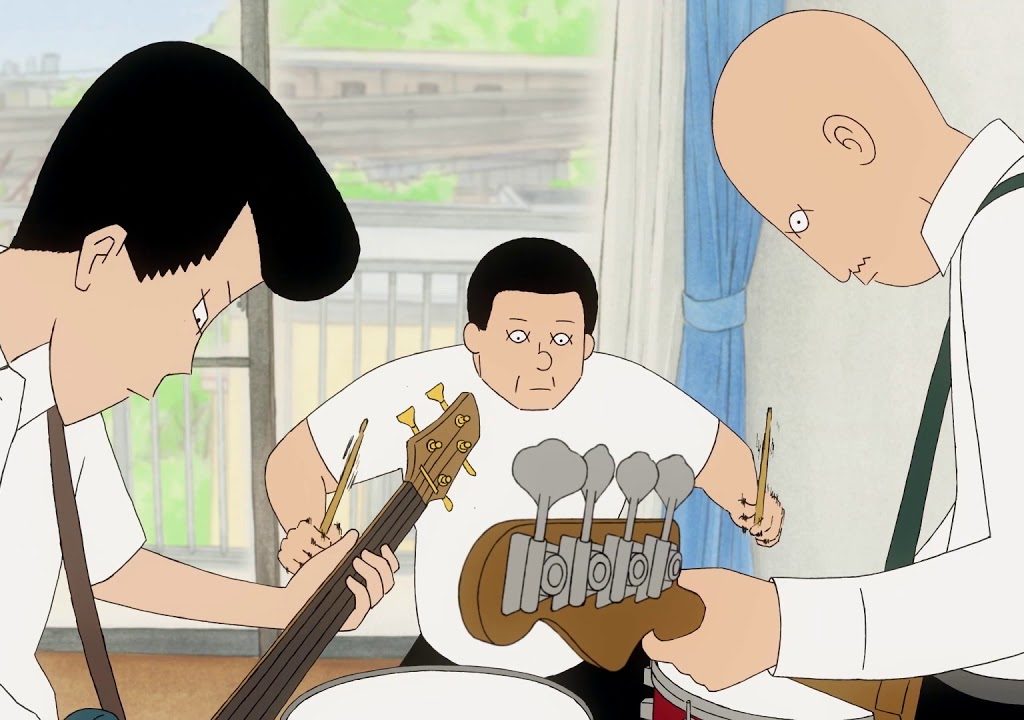 The culmination of seven years of independent production, On-Gaku: Our Sound is a film with such a distinctive wavelength and such understanding of what it is that you can see where all the passion and effort went. Director Kenji Iwaisawa’s debut feature is a powerful statement to his abilities as a visionary, not only directing this chill musical odyssey but also scripting, storyboarding, character designing, editing and handling almost all of the 40,000 hand-drawn frames of animation that make it into the film.

The latest acquisition by gkids, the film represents a breath of fresh air for the established anime industry and deliberate counter-programing to their output. On-Gaku: Our Sound has this undeniably infectious vibe that’s hard not to get on board with.

Based on the manga by Hiroyuki Ohashi, the film follows three delinquents (Kenji, Oota and Asakura) who live an implausibly lackadaisical existence. In between melees with other school gangs and hours skipping class to commiserate silently in an empty room, they form a band. Why? Entirely by happenstance, impulse and more because the trio couldn’t think of a reason not to.

Their music consists of a mono-note drone where Kenji and and Oota (who both play bass because Kenji didn’t know what instrument he already owned) strum awkwardly while Asakura pounds a floor tom and snare (all they could steal from the school’s music room) like a metronome. The joke is none of them know their instruments or how to write a song, and none of them care because they think this single note marching drone sounds incredible. They keep “practicing,” sign up for a music festival, and just kind of live in this slacker ethos where nothing bothers them.

You might not believe me, but On-Gaku: Our Sound is incredibly compelling. This is partially on account of Iwaisawa’s flat, planar animation style. Stiff on first glance, the colorful yet subdued backgrounds mixed with the simplistic character designs give the film an undeniable personality that is deeply endearing.

Yet, the animation itself (again, almost all hand drawn by Iwaisawa himself) is incredibly smooth and detailed for such small, seemingly insignificant actions. However, occasionally the film will break into sequences of beautifully stylized, awe-striking animation like surreal music videos jutting into the narrative that surprise and delight out of nowhere.

On top of that, On-Gaku is also one of the funniest films I think I’ve seen all year. Iwaisawa is apparently some master of deadpan humor because this is the most understated and unassuming laugh riot I can think of having seen.

Our three soft-spoken and monotone band members are so underplayed that every sudden, impulsive thought they have (like naming the band “Kobujutsu” because it was the first thing they thought of or joining a music festival) plays for huge laughs even when the film never feels like it is leaving the cruising speed of its first gear. It’s so deliberately deadpan that it becomes hypnotic, pulled into the haze of their endless summer, just making music for the fun of it and because there was nothing really else to do.

This is why On-Gaku resonates so well, especially with the year we’ve all had. Looking past the immense technical achievement of his design or the unquantifiable laughs of his script and cast’s performances, Iwaisawa has created a vibe. A mood. A feel-good story of low stakes but undeniable impact that will guarantee it to stick in your memory long after you watch it.

Funny, smart, striking and just overall chill when it washes over you, it’s a resounding statement for the director who will no doubt be a talent to watch in the anime industry. Hopefully the team will get some recognition and support from the industry so that it won’t take another seven years for a follow-up, but On-Gaku is so good that I’d be willing to wait that long.

One Response to “Japan Cuts 2020: ON-GAKU: OUR SOUND Review”