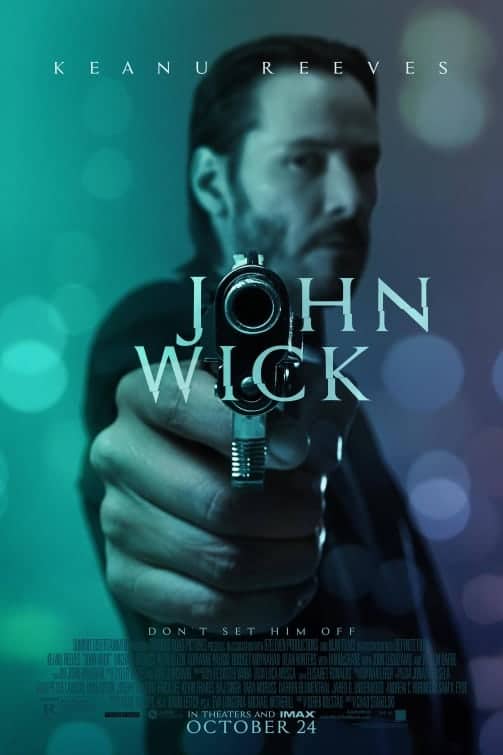 In the post-Raid era it’s an unescapable certainty that any action film that follows simply won’t be able to achieve the lofty heights of those masterfully made films. The films, especially the second one, featured a fine balance between compelling drama and hard-hitting, fast-paced action.   They had a palpable energy that many films, regardless of genre, seldom achieve.   For recent action films, the adage of “old is new again” holds true as many of the big action films have been ‘80s-‘90s action-throwbacks that feature aging action-stars. Actors like Arnold Schwarzenegger, Sylvester Stallone, Kevin Costner, Pierce Brosnan and Liam Neeson have all graced the silver screen with action-thrillers, some with greater success than others. Keanu Reeves now joins that group with the action-thriller John Wick.

After burying his wife Helen (Bridget Moynahan), who had succumbed to an illness, John Wick (Keanu Reeves) returns to an empty home. Not wishing her husband to be alone Helen gives him a dog named Daisy to care for and love. All is seemingly well for the duo until a chance encounter leaves John broken, his car stolen and Daisy dead. Little do his assailants know that they just messed with the wrong man. John Wick isn’t just an ordinary man. He’s a retired hitman; not just any kind of hitman either. As one person describes him “he’s the guy you send to kill the Boogeyman” and he’s coming out of retirement for revenge.

John Wick is very much a ‘80s throwback, check-your-brain-at-the-door, B-movie, action thriller. For many action films of that era the emphasis was on the action and not so much the plot. John Wick has a very basic plot, hitman seeks revenge, and features plenty of action and mayhem. Screenwriter Derek Kolstad has written an engaging criminal underworld populated by some colorful characters with an intriguing code of ethics. Nearly everyone knows who is who and what they are capable of. Respect is given to those who demand it and space is given to those who warrant it. For this viewer it turns out the world and some of its characters were far more interesting than the action sequences.

Co-directed by David Leitch and Chad Stahelski the action sequences have plenty of flash but little substance. A scene that establishes just how lethal John Wick can be is a great action sequence. However, much of what is seen earlier becomes rather repetitive later in the film. Even when the fights turn to hand-to-hand combat they aren’t all that impactful. The action sequences are well choreographed, but the problem lies in the fact that Wick is set up to be such an indomitable force and the many henchmen he plows through are nothing more than cannon-fodder that you never get the sense Wick is ever in any real danger. There was never a moment where you may find yourself wondering just how the hell he is going to get out of this one. Just look at Steven Soderbergh’s Haywire and what he did with Gina Carano’s lethal killer who is also vulnerable. Despite their best efforts this film doesn’t even feature a suitable foil for the hero and many of the much-anticipated confrontations feel anti-climactic.

Reeves is great in the title role and he looks to be enjoying himself in all the machismo, cheesiness and in one scene over the top grandstanding. He’s strong in the action scenes but much better in the quieter moments such as mourning his wife, calmly stalking his prey or having a conversation with a colleague. Michael Nyqvist and Alfie Allen star as Viggo and Iosef Tarasov, respectively. Nyqvist is good as the head of the crime family who must contend with the wrath of Wick. Allen’s character is pretty much one-note and he does about all you can do with the role. The most interesting lot of characters comes in the form of the fellow criminals who dance in the crosshairs of Wick’s vengeance. Willem Dafoe, Adrianne Palicki, Ian McShane, Lance Reddick and John Leguizamo all turn in memorable performances and their characters are so intriguing one wouldn’t have mind if the film spent more time with them and explored their backstories.

John Wick is a serviceable action film where the non-action sequences are actually the film’s strong suit. The action scenes are at times cool but are fairly derivative. Again it’s all flash but little substance. If you’re fine with that then you’ll likely eat this one up and be ready for seconds.