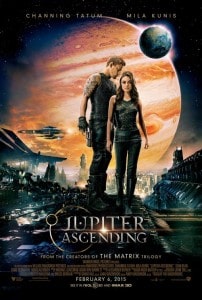 It’s been nearly sixteen years since the arrival of one of the most anticipated sci-fi fantasy films ever made and one of the most exhilarating and original sci-fi films ever created. One would be reviled by many, and not the one you’d expect, while the other was adored for being so unexpectedly frickin’ cool. The year was 1999. The films were Star Wars-Episode I: The Phantom Menace and The Matrix. It is now 2015, a year where we will not only see a new Star Wars film but also the latest sci-fi epic from the Wachowskis, Jupiter Ascending. It’s a film that is unexpectedly far from cool and surprisingly has much in common with that reviled film that many claimed destroyed their childhood.

Jupiter Jones, played by Mila Kunis, seems to be living an average, hum-drum life in Chicago while working as a maid with her immigrant mother. Day in day out it’s the same dull routine and she wishes for a better life. Little does Jupiter know that she is part of grander cosmic tapestry that is about to come crashing down on her so called life.

In this grand tapestry, written by the Wachowskis, we learn that Earth is just a mere commodity in an expansive universe that is governed by a family whose members sole motivation is to be the sole possessor of the spice which can only be found on the planet…whoops wrong franchise. In all seriousness, the Abrasax family wants control of Earth and its resources and unbeknownst to Jupiter she is the only person in the universe who could stand in their way. Over the next few hours we are introduced to the denizens of this universe, where they are from, what purpose they serve and all of it is about as slow and plodding as Episode I. One cannot help but think about the trade negotiations that served as the impetus to the entire Star Wars saga as we listen to the family prattle on about who owns what, who has legal rite to this and who deserves to have that by law. It is very much like a first draft of a Young Adult novel where the authors have thrown in everything including the kitchen sink in the hope that something may connect with the reader. The story is very convoluted, fails to engage and is ultimately forgettable.

The film’s cast includes Mila Kunis, Channing Tatum, Sean Bean, Eddie Redmayne, Douglas Booth and Tuppence Middleton.   Kunis is not very convincing as someone who discovers they are essentially the queen of the Earth; not to mention the rather forced romance between Jupiter and Caine, played by Channing Tatum. Tatum’s character Caine we are told is part canine and like a wound up puppy he spends most of the film jumping around to and fro. Sean Bean is…once again playing Sean Bean. Of the Abrasax family only Redmayne seems to be trying to do something, what exactly that was is hard to say, let alone hear as he likes to speak in quiet whispers. The performances are about as stiff and stilted as one would expect from directors who don’t know how to direct actors but the Wachowskis know how to do this so what happened here? 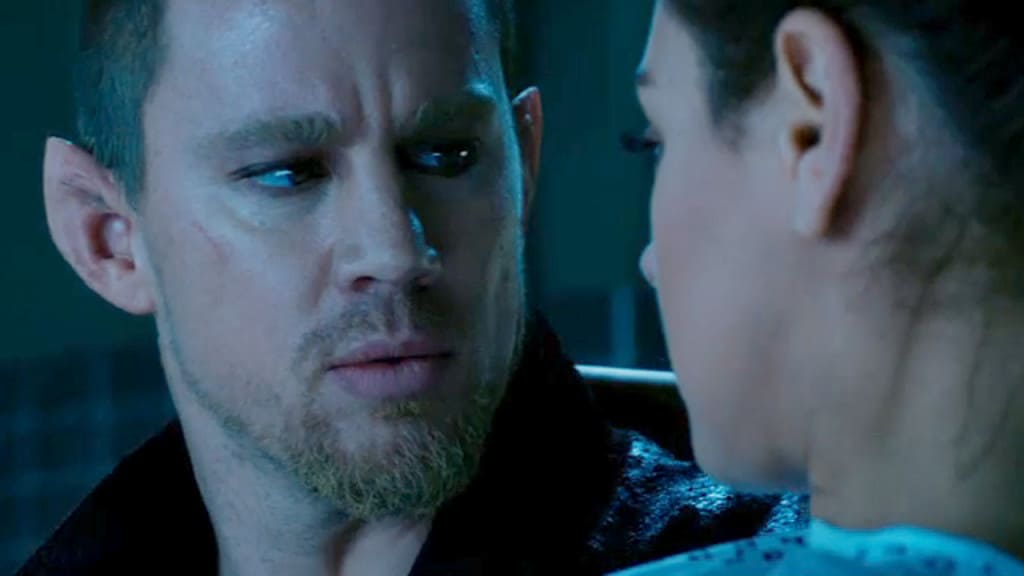 The visual effects are the highlights of the film as the CGI work is pretty solid. The kinetic yet inert action sequences, and there are many, are well designed and pretty to look at but again they aren’t very exciting. It’s a shame since there are many cool environments and ships that populate this universe but like the Star Wars prequels it was mere eye-candy that tried to hide the under-developed story. About the only other thing that was good is Michael Giacchino’s rich, robust, operatic science fiction score.

It’s kind of unfair to compare this film to those that came before but considering it’s the Wachowskis you wouldn’t be out of line to expect something good. Yes, many people hated Speed Racer, this guy really liked it…a lot, and believe it or not that was a far better film.   It seems like they should stick to adapting previously published works as opposed to creating original works. It may have worked with The Matrix and Bound but the rest of The Matrix Trilogy, this film and to some degree Speed Racer may be just enough to turn many of their fans into detractors. Needless to say coming off the outstanding Cloud Atlas this was a massive disappointment on the level of that reviled film of 1999.