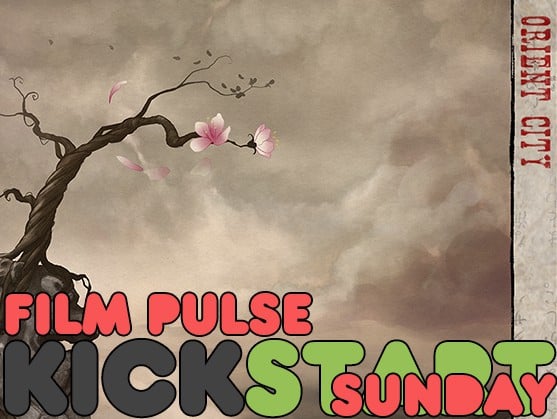 This week’s Kickstart Sunday pick is Orient City, a hand drawn animated film from Ryan Colucci and Zsombor Huszka. The film is a samurai western about a man sworn to protect a young girl after her family is killed and the path of revenge they set out upon.

It looks like the Kickstarter page was not showing up correctly last night and only showing the video, all the information is there now, so please disregard the next paragraph!

Unfortunately, this is an example of what not to do with a Kickstarter campaign, as the page itself has no information on it aside from the campaign video, which, while highly produced, is almost inaudibly quiet. I got a PR e-mail telling me about the film so I don’t know why at the very least that wasn’t included on the page. More information about the funding and where it’s going would also be a good idea and maybe some perks to entice prospective backers. These items may be added later, but without having the page fleshed out from the beginning the creators are surely missing out on donations.

Either way, this looks like a very promising film and I would recommend you check out the Kickstarter page here and consider a donation.

Orient City: Ronin & The Princess is a samurai spaghetti western that mixes the characteristics of the American Wild West and Feudal Asia. An unforgiving place, Orient City is a vertical tangle of rock and skyscrapers interconnected with waterways and cable cars. The poor, quite literally, dwell at the bottom. At the center of it all is Boshi, a fallen samurai who has sworn to protect a young girl whose family has been assassinated. Together they head to Orient City for one thing… revenge.