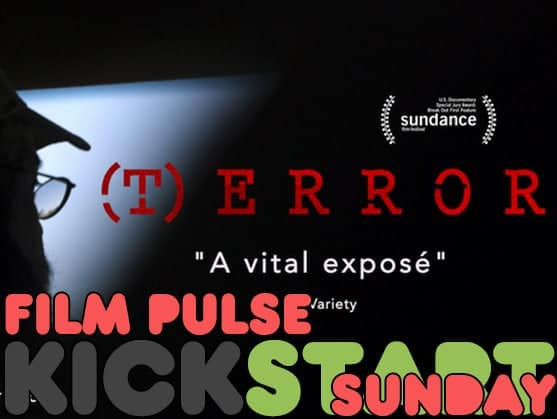 This week’s Kickstart Sunday pick is something of a first – it’s not only a film that has already been completed, but it’s a film that I had the opportunity to see several months ago. The documentary (T)error from directors Lyric R. Cabral and David Felix Sutcliffe is an incredibly fascinating look at the FBIs use of informants to investigate possible terrorists within the United States.

Although the film had a successful run on the festival circuit and found critical praise, because of the information presented in the documentary securing the required insurance necessary to distribute the film has proven difficult for the filmmakers.

Having seen this movie myself, I can attest that it is absolutely worth a look and it would be dreadfully sad if the film couldn’t be released due to simply the possibility of a lawsuit. Be sure to check out the Kickstarter page here and send them a donation today (there’s 25 days remaining as of Sunday, August 9th) and take a look below for more information.

(T)ERROR is a new documentary we recently completed that marks the first time journalists have gone behind the scenes of an active FBI counterterrorism sting operation. The film features unprecedented access to an active informant and offers viewers a rare glimpse of the government’s counterterrorism tactics. (T)ERROR illuminates the murky justifications behind those tactics, and asks: Who is watching the watchers?