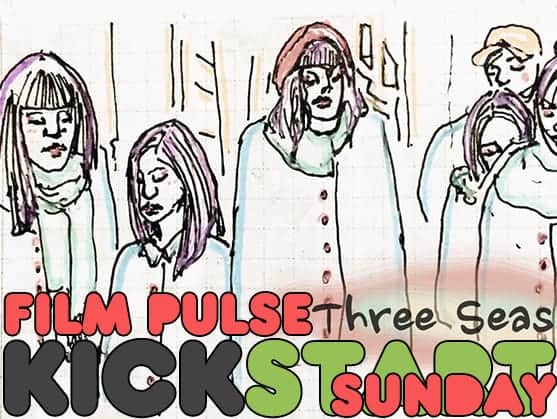 This week’s Kickstart Sunday pick comes to us from director Mengxi “Althea” Rao and her short film Three Seasons. We don’t normally pick student films for this feature, but after Mengxi reached out to me and described her MFA thesis film as an adaptation from a Confucius fable, written in English, with a pre-Victorian looking western setting and costume design and an Indian lead actress and a Mexican lead actor I was on board.

The film revolves around a young woman searching for her estranged cousin in a town that seems to be frozen in time as they slumber for an entire season.

This Kickstarter campaign currently has 34 days remaining as of this writing, with a goal of just $5,786 so be sure to check out the project page here and consider sending a donation their way!

The rule of time and season is different in Cloudville. In the current season, her cousin succumbs to random bouts of narcolepsy.

To Freya, Elliot feels not much different from a stranger except their partially shared ancestry, a piece of knowledge that was passed down from parents and testified by an old photograph .

When Elliot manages to fight off the seasonal slumber, he and Freya struggle to connect, while Freya hides a family secret regarding Elliot’s mom who disappeared from Cloudville in disgrace