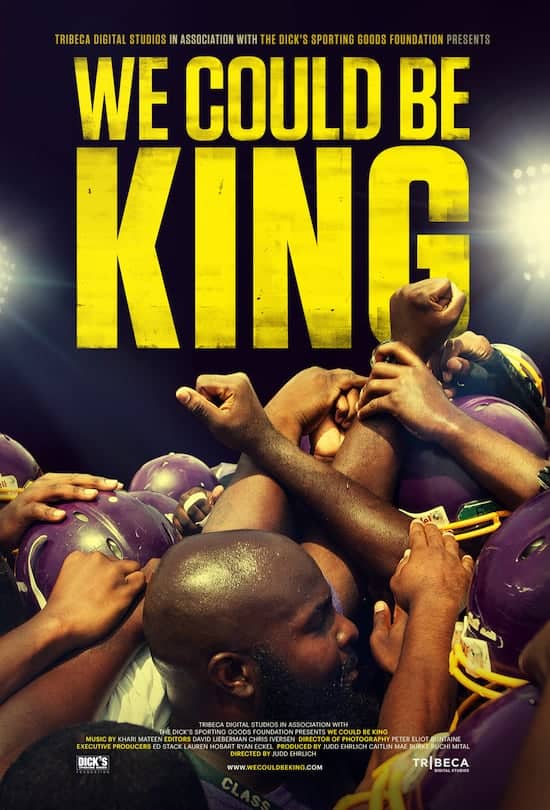 Stories about cross-town rivals are nothing new.  We’ve all read about them or seen TV shows or movies about them.   The same can be said about the profound impact of city financial budget cuts that affect thousands of teachers’ jobs and the education of countless children and teenagers.   You only need to look at your nightly local news to see a story about a violent flair up between rivals or how yet another school had its doors closed due to budget cuts.   It’s an unfortunate sign of the times that always seems to paint such a negative picture but when it’s turned into an unexpected positive that is something to take notice of.   Such is the case of the teachers and students at Martin Luther King High School in Philadelphia, PA and they are the subject of Judd Ehrlich’s documentary We Could Be King.

Due to severe budget cuts the city of Philadelphia is forced to close 37 schools in the district.  One of the schools closed was a 99 year-old institution, Germantown High School.  Germantown High was cross-town rivals with Martin Luther King High School and true to form the rivalry sometimes became violent and deadly.   When Germantown High is closed the student body will merge with that of Martin Luther King High.   The staff of MLK are faced with the daunting task of starting a new school year understaffed, the MLK students are faced with sharing the same space with their rivals and the Germantown students must get accustom to their new environment.  It’s a recipe for disaster and the first day doesn’t go by without any incidents.

Ehrlich’s documentary doesn’t just focus on the immediate problem at hand but shifts the attention to the real story developing in the first year of the merger.   The doc not only emphasizes the importance of education but also underlines the impact that sports have as well.  In the midst of the chaos, Coach Ed Dunn, a man who is essentially volunteering for the position, is prepping the Cougars for another football season.  The team hasn’t won a game in over two years.  Dunn, with the full support of Principal William Wade, must find a way to get this group of rival players to work together as a team and at the onset it doesn’t look good.  Ehrlich also profiles two of the players on this new team, Sal Henderson and Dontae Angus.  Sal is a talented player, being raised by his adoptive parents, who was born to play.  Dontae is a shy, gentle giant whose only opportunities come from his ability to play the game.  Sal wants to be noticed by recruits.  Dontae really wants to get into a NCAA college.   The documentary follows these three people through the course of the season and the results are unexpected and uplifting.

Judd Ehrlich’s well-made documentary brings to light the importance of education, sports and the arts.  While education is paramount, the impact that sports, as seen here, cannot be denied.   You can see the growth, understanding, determination and confidence that build in these teenagers.  Especially when they are teenagers in an environment where nothing much is expected of them.   The film will no doubt bring great appreciation for the educators who work tirelessly to steer these kids towards the right path and will underscore the importance of focus and commitment to achieve great things.  It’s definitely worth checking out.