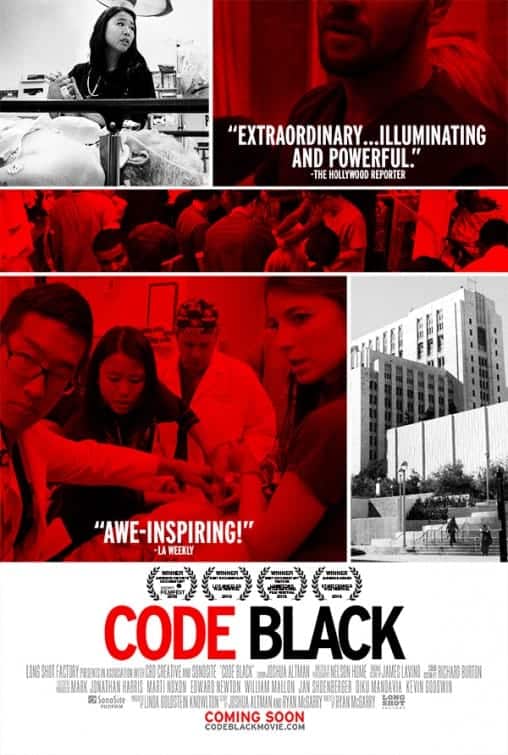 That dreaded and unexpected trip to the emergency room.   All sorts of thoughts and anxieties will likely run through your mind should you find yourself there.  What’s wrong with me?  Am I going to catch somebody’s germs?  How long am I going to be here?  Can I afford this?  Will my insurance cover it?

Most of us have had to make the trip at some point.  Consider yourself a paragon of good health if you haven’t.   Unless you were there about the only exposure people have had to the emergency room environment is likely through television or movies.  TV shows like ER and Grey’s Anatomy have certainly given the ER a dramatic spin.  Surprisingly the drama that unfolds in those shows isn’t that far from reality.  Ryan McGarry’s eye-opening documentary Code Black takes us into the emergency room of the Los Angeles County Hospital and follows the men and women who work tirelessly to save lives and make a difference.

When we first see the ER of the old L.A. County Hospital you realize TV had it all wrong.  What unfolds before your eyes is sheer chaos.  Trauma units are hard at work on numerous ill and injured.  It’s amazing to comprehend.  At the center of the action is “C-Booth” which is where the worst cases are brought.  McGarry doesn’t shy away from the drama, or blood for that matter, as we watch doctors and nurses in a race against time to save this person on their table.  Mind you there is chaos going on all around them as this transpires.   We see lives saved, we see lives lost and we see how this affects the people who run the ER.  With this opening you gain a new appreciation for those in the medical field.

We are introduced to the doctors, assistants and nurses who work the ER.  They often work long shifts with little pay.  We are told they are there to make a difference and that it’s not about the money.  Their actions ring true and back up that statement.   As the documentary unfolds we learn about the day to day life in the ER, as well as the pluses and minuses of working there.  We get to know a little about them and interestingly enough these L.A. doctors look like stereotypical “L.A.” doctors.  They’re a good looking bunch.   They share some personal stories that provide insight into why they became a doctor or how events shaped their attitude towards the profession.  One doctor recounts his battle with cancer when he was a teenager and he recalls how grueling not knowing the results were and he never wants his patients to have to endure that agonizing wait if he can help it.

When a new facility is opened things change dramatically.  The difference is night and day.   We have seen what it is like to have a doctor-patient connection and the doctors fear that connection is lost and

they want that back.    We see their frustration in having to deal with paperwork and the bureaucracy when they would much rather be treating the patient at that moment.   The profession has gone from doing what’s best for the patient to determining their level of “profitability” before treating them.  This notion doesn’t sit well with any of the doctors.  Despite a new facility the volume hasn’t changed and when things get super crazy they call it a “Code Black” which means they’ve exceeded capacity and everyone knows this will be a long night.   However, the staff of the new L.A. County Hospital, while working together to make things even more proficient than thought possible, have proven that that connection between doctor and patient doesn’t have to be lost.  It can happen it will just take some work, ideas and sacrifice.

McGarry’s documentary not only provides a fascinating and dramatic look into the ER it also sheds light on health care reform as seen by those in the trenches.   This film is by no means a cry for action but it does open the viewer to thoughts and ideas they may not have initially considered.   In this confusing and frustrating quagmire that is health care it’s nice to know that there are still doctors who are there to treat a person and not a number on a spreadsheet.   McGarry’s insightful film serves to educate and inform which is about the best thing a documentary can do.   It is certainly worth a look.