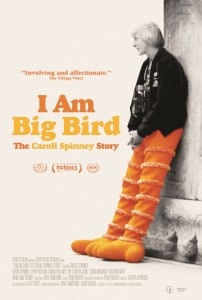 Caroll Spinney may not be a household name, but his iconic Sesame Street characters surely are. For the last 48 years Spinney has been the man behind Big Bird and Oscar the Grouch, two of the most well known characters in the Muppet universe. Dave LaMattina and Chad N. Walker’s film I Am Big Bird: The Caroll Spinney Story takes a look at the man behind these characters and paints a lovingly crafted portrait of him, both in his professional career and his personal life.

Through a great amount of archival footage, home movies and classic water color-style animation, we learn about Spinney’s humble beginnings as an aspiring puppeteer through today, performing as Sesame Street’s two biggest characters next to Elmo.

This is a film designed to tug at your heartstrings, much like the previous Sesame Street doc, Being Elmo. But Spinney’s story results in a more captivating and fascinating film, in addition to feeling more polished. It’s a little heavier as well, with several extremely emotional moments, including the obvious discussion of the great Jim Henson and his untimely death.

From being reunited with his co-star on Big Bird Goes to China to meeting with the husband of a woman who was murdered on his property, the film is rife with tear-jerking moments but rarely feels intentionally manipulative.

One of the more interesting aspects of the film is the way in which Spinney must control Big Bird from within the suit. The intense physical demand and coordination is astounding, and I truly had no idea how complicated the process was. Getting this behind-the-scenes look at how things work on Sesame Street is incredibly fascinating.

For as much heartbreak that the film conveys, there’s an equal amount love and happiness. His unending love for his wife comprises some of the more tender moments of the documentary and proves to be an inspiration to all young couples who have found their soulmates.

Caroll Spinney’s story is one of ups and downs but is ultimately a touching tale of a man whose happiness spreads to all those who are around him. Most of us grew up watching Big Bird and drinking in his sweetly innocent pearls of wisdom and learning about the world as he does.  I Am Big Bird is a compassionate and well crafted look into the life of the man who gave so many of us so much joy over the years. Although it may be a little too sentimental for viewers looking for a more light-hearted doc, this is still one that is worth a look.