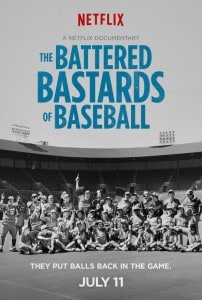 There are numerous themes explored that one may recognize from countless narrative features, such as Rocky, Major League or The Bad News Bears, but unlike these classic films, the events in this film are true. They may seem too good to be true because they’re the sort of antics we don’t usually see in Major League Baseball – or The Minors for that matter. The Ways’ film takes you back to the early seventies, when one man successfully turned a minor ball club into something major.

In 1973, Bing Russell, a film and television veteran, created the only independent baseball team at the time, the Portland Mavericks. The team did not have any affiliation with a Major League ball club, and it played in a city that was deemed a wasteland for professional baseball. Players weren’t drafted; instead open tryouts were held, and all you needed to do was to fill out an information card. Prospects emerged from all corners of the country, and many of the players who made the cut had been rejected by other ball clubs.

Critics were skeptical and felt this team had failure written all over it, but in the span of one season, the Portland Mavericks were shattering attendance records, establishing new benchmarks in winning percentage, and were being embraced by the underserved fan base; just to name a few accomplishments. This was only to be the beginning of the Mavericks’ indelible rise in baseball lore.

This is probably a piece of baseball history that many may have never heard about before now. While the film is very much about the Portland Mavericks, the heart and soul of the story is Bing Russell, as his fingerprints are evident all over the film. From his relationship with his players and the community to his business acumen and understanding of/love of the game, Russell is always on display even when he’s not on screen. His enthusiasm is infectious, and one may leave this film wondering why this kind of ball is missing from today’s game.

The brothers direct the film in a playful manner that isn’t too cheeky but certainly captures the spirit of Portland Mavericks ball. There’s plenty of great archival footage of the club, and the film surprises us as details about a certain person or event are revealed. Bing Russell’s son, Kurt Russell, is the most recognizable name in the club but you’d be surprised by what other players became. This film is very much a family affair, so it’s no surprise that the film turned out as well as it did. Family members were involved in editing, scoring, graphic design and interviews, just to name a few.

For sports fans in general, this is a must-watch documentary that may have you longing for a simpler time and place in baseball history. It’s quite informative and immersive in the history of the club and its players. It’s engaging enough and has plenty of humor that will be endearing to non-sports fans as well. To quote the famous phrase, “If you build it, they will come,” Bing Russell did, and they came…in droves…and now we are left wanting more.