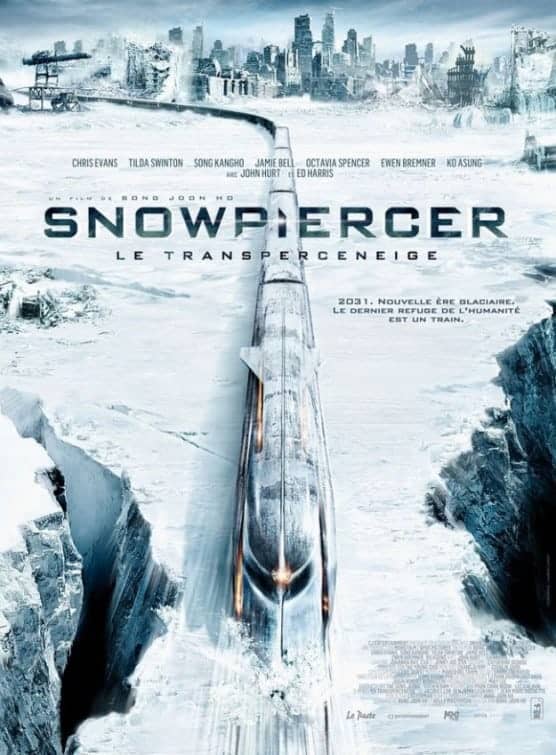 Sci-fi films, well most films actually, often leave themselves open for scrutiny. When a film takes place on another planet or in a different time, like the distant past or future, and the filmmakers do a decent job of setting up the environment in an engaging way – it’s usually easier for an audience to buy into the faux locale or point in time, making the viewer more susceptible to the unfolding drama.

Snowpiercer doesn’t take place on another planet, in the distant past nor the distant future. It takes place on Earth and only a mere two decades into the near future. The setting is quickly established in the film’s opening credits and jumps right into its narrative, but events covered early on cause consternation, raise too many questions and thus doubts, and an overall lack of credibility, worsening as the film progresses.

In 2014, mankind makes a last-ditch effort to curb climate change. After releasing a gas that engulfs the planet, an unexpected ice age occurs. Somehow the last vestiges of human existence have found refuge on a super-long, high-speed, perpetual-motion train that circumnavigates the globe. Seventeen years after the release of the gas, the residents of the train’s tail section, the poor and destitute, seek a better life as they plot to overtake the train’s front section, where the rich live.

The plot holes are far and wide, and the film can’t really recover, not to mention the obvious, heavy-handed class warfare that permeates the story, also bringing it down a notch. The film is based on the 1982 French graphic novel “Le Transperceneige” written by Jacques Lob and Benjamin Legrand and illustrated by Jean-Marc Rochette. It was adapted for the screen by director Joon-ho Bong, and the screenplay written by Bong and Kelly Masterson. Having not read the graphic novel, it’s not clear to me just how faithful Bong’s adaptation is. Bong recently directed Mother and The Host, and this is his first English-language feature. It’s quite conceivable that something was lost in the translation from French to Korean then to English. Translation withstanding, the science seems out of date.

Bong creates some visually striking imagery when the group travels from car to car, especially as the cars become more opulent, and the film features some notable actors, including somewhat unrecognizable Chris Evans, Jamie Bell, Ed Harris, John Hurt, Tilda Swinton, Octavia Spencer and Kang-ho Song. Swinton is the only one who is given the opportunity to truly stand out with her eccentric take on Mason, a character that has a bit of quirkiness to her that’s gloriously off kilter. The rest seem to just be going through the motions.

Snowpiercer the graphic novel may have a decent story that’s of its time, but it didn’t translate well in the 21st century. Bong has made great films in Korea, and there is no reason he can’t succeed in the States. He just picked the wrong story.