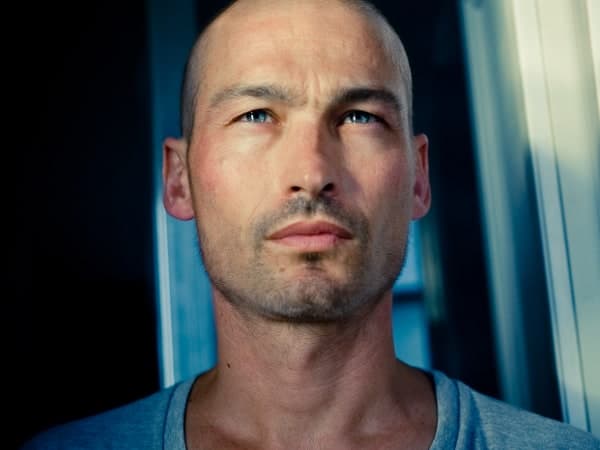 “Never stop; never stop fighting till the fight is done.”

It seems rather odd for Be Here Now to open with a quote from The Untouchables, especially when one takes into consideration just what this particular film is about. Lilibet Foster’s powerful, intimate and emotional documentary chronicles Andy Whitfield’s battle with life-threatening cancer.

This one quote seems to encapsulate the emotionally and physically draining fight that lies before Whitfield, the subject of this documentary. You can never stop. You can never stop fighting…no matter what happens, no matter how hard you have to keep going. While that quote defines the drive, it’s the quote from which the film derives its title, “Be here now,” that serves as his mantra, not only for this fight, but also in life as well.

Andy Whitfield had just completed work on a highly successful and well regarded television series called Spartacus. It was a strong first season, and everyone has high hopes for the continued success of the show. Having done some modeling and a handful of roles on television and film, Whitfield was on top of the world. With his loving and supportive wife, Vashti, and their two children, life is good. However, it wasn’t long after the production wrapped that Whitfield noticed something was wrong. Soon after, he was diagnosed with non-Hodgkin lymphoma.

Foster was granted intimate access by the Whitfield family as their patriarch fights to get better. Viewers are with the family, Andy and Vashti in particular, as they face the highs and lows together. Andy’s parents and the Whitfield family together help Andy to beat this disease, of which 80 percent of those diagnosed with enter remission. They face each hurtle with a surprising amount of calm and dignity and revel in each small victory, knowing they still have a fight ahead of them.

The film proves to be a powerful testament to love and family as we see the strength and energy his family provides, which clearly fuels him to keep on keepin’ on. When one hears the dreaded word “cancer” in a diagnosis, it comes as no surprise that self-pity and depression can take hold when one considers his own mortality. While each individual’s fight may be different, this documentary and Whitfield, clearly, show what positive thinking and optimism against resounding odds can achieve in any situation. Andy continues to seek treatment, whether it is via chemotherapy or by natural means, and it’s all for the sake of his family.

This is an emotional and powerful documentary. It is also very inspiring and hopeful, despite its subject matter. The intimacy of the film really puts you in the trenches with the Whitfields, and you feel every high and low that they do. It truly reinforces Andy and Vashti’s mantra of “be here now.” Be present in the moment and don’t focus on what may pass or has yet to be. It’s a poignant and heartfelt sentiment that will touch the hearts of many and will hopefully reinforce the spirits of those in need.