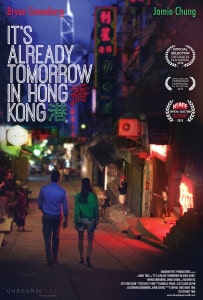 The films that comprise Richard Linklater’s Sunrise Trilogy are considered by many to be some of the best independent features of the last couple decades. In the trilogy, two strangers meet in the first film, and each subsequent film picks up their story several years after the previous installment. It’s very much like the acclaimed 7 Up saga, in which a group of individuals are revisited every seven years. With that in mind, it’s easy to dismiss Emily Ting’s feature film directorial debut as a “Linklater wannabe,” but though the formula may seem familiar, Ting’s directorial style and writing are not. It’s Already Tomorrow in Hong Kong is an engaging and relatable romantic drama that poses some interesting, awkward and heartfelt questions about life, love and the pursuit of talking plush toys.

Ruby (Jamie Chung), a Chinese American visiting Hong Kong, and Josh (Bryan Greenberg), an American expatriate, have a chance encounter outside a local bar. Josh offers to help Ruby get to where she needs to go, and over the course of the evening they clearly develop an attraction for each other as they walk through the city talking about life, culture and the art of toy making. As good as things look, their little adventure does not end well, yet that is not the end of their story.

Ting not only directed the film, but also wrote its story and screenplay. She has taken the tried-and-true “boy meets girl” formula, mixed in liberal amounts of Linklater, and added an exotic location to this flavorful concoction. Yes, there are elements of familiarity, but she has written living, breathing characters who find themselves in very real and relatable situations. 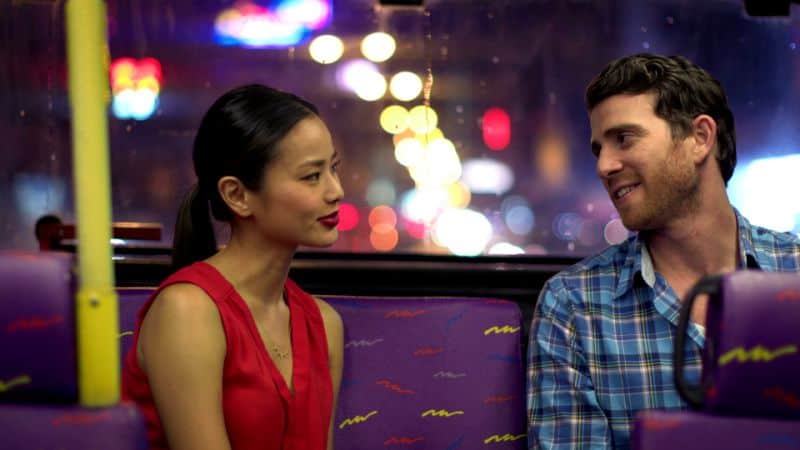 There is plenty to be found in this film that may very well remind viewers of personal events that they have witnessed, or have even lived through, themselves. There was even a humorous and cheesy exchange that struck this film critic as particularly funny because it sounded like something I would say or have said in the past. The dialogue flows nicely, like a natural conversation would, and often times feels improvised.

Wanting to maintain a sense of realism, Ting shot the film in unlocked locations, meaning only the actors were directed and everything else in the film just happens naturally. Chung and Greenberg were told where they had to go and what to say, and cinematographer Josh Silfen was told what he had to film. For the rest, the filmmakers crossed their figures and hoped for the best. It worked.

Chung and Greenberg have a nice chemistry together and are very convincing. They are both likeable, and you can feel their plight as their journey unfolds. In many scenes, they are relied upon to express their thoughts and emotions without any dialogue, and because you do become emotionally invested in them, you are in tune with what they are feeling; you get what they saying even when they haven’t said anything at all.

The city of Hong Kong serves as both the backdrop of the story and as a central character as well. Silfen captures the city nicely, bringing its beauty, its culture and its appeal to the forefront.

Ting’s film is an amusing, sometimes awkward, and often times endearing romantic-drama. It certainly isn’t groundbreaking, but it also doesn’t have to worry about living in the shadow of Linklater’s trilogy. It features a nicely told story about two people who find themselves on a precipice in a foreign land, and it skillfully draws you in to see just where this will all may lead.