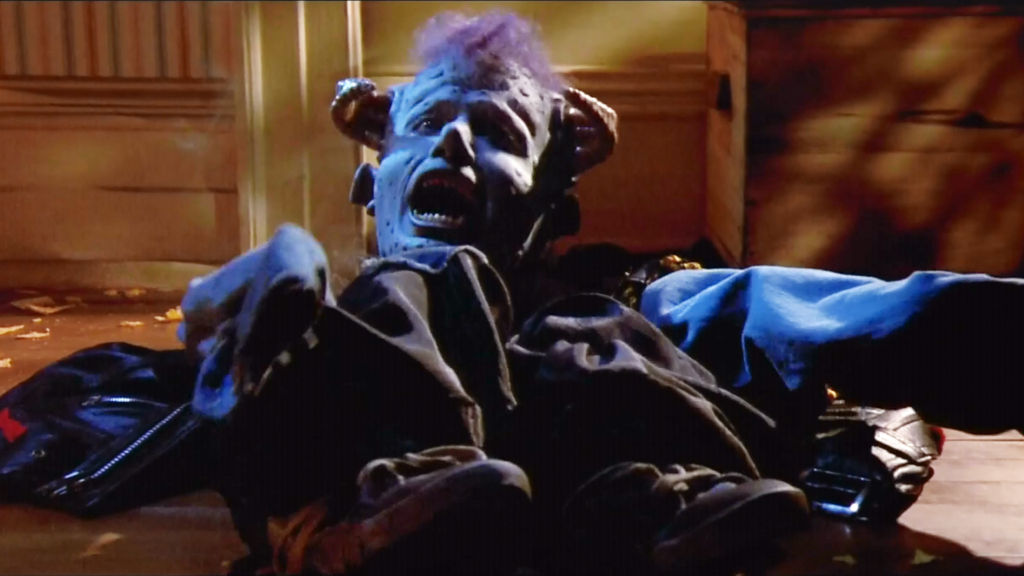 Even though I was a rabid fan of horror as a youngster, I wasn’t allowed to watch the really heavy stuff as a kid, so I had to find as many kid-friendly scary movies as possible. Richard Greenberg’s Little Monsters from 1989 was one of these movies. After recording it off of TV, it became one of my most-watched tapes, even more so than Beetlejuice, its big brother.

Produced by Vestron Pictures, but sold to United Artists after the former’s financial woes began, the film stars Fred Savage as a kid who discovers that his new house is being terrorized by a mischievous monster. His borderline-genius engineering skills kick in, and he executes a trap for the monster, named Maurice (Howie Mandel), who he befriends and who shows him the monster underworld.

If you turn on Little Monsters as an adult in 2020, you’ll probably not have a great time. Mandel’s character of Maurice is always ‘on,‘ like a more grating version of Beetlejuice, and the script could have used a few more passes. Although the latter could be due to the fact that there was a writers strike during production, preventing Terry Rossio andTed Elliott from being on set or making revisions.

Another surprise is how inappropriate Little Monsters is for young kids. With numerous and surprisingly gruesome horror elements, like the main antagonist, Boy, who has a human-skin mask over his grotesque face and the mean-spirited pranks Maurice perpetuates, like pissing in a kid’s apple juice, this is definitely not a movie that tracks for 2020.

Revisiting it for the recent Blu-ray release on the Vestron Video Collector’s Series label, however, was a wonderful bit of nostalgia, and I had an absolute blast coming back to this tonally awkward kids movie.

Although it was not a restoration, the transfer on the disc looks quite good, with very few noticeable flaws, the same of which can be said for the digital version included in the package. Bonus content includes new interviews with Howie Mandel, producer Andrew Licht, and special makeup effects creator Robert Short, along with archival interviews with Fred Savage, Ben Savage, Robert Short, and director Richard Alan Greenberg.

Also included is some behind-the-scenes footage, EPK and promo images, the theatrical trailer, and a stills gallery. All in all, it’s a decent package, and the new interviews contain lots of fun little trivia tidbits about the making of the film. For those like myself who grew up loving Little Monsters, this Blu-ray is absolutely worth picking up and is a welcome addition to the awesome, growing library of Vestron Blu-ray releases.