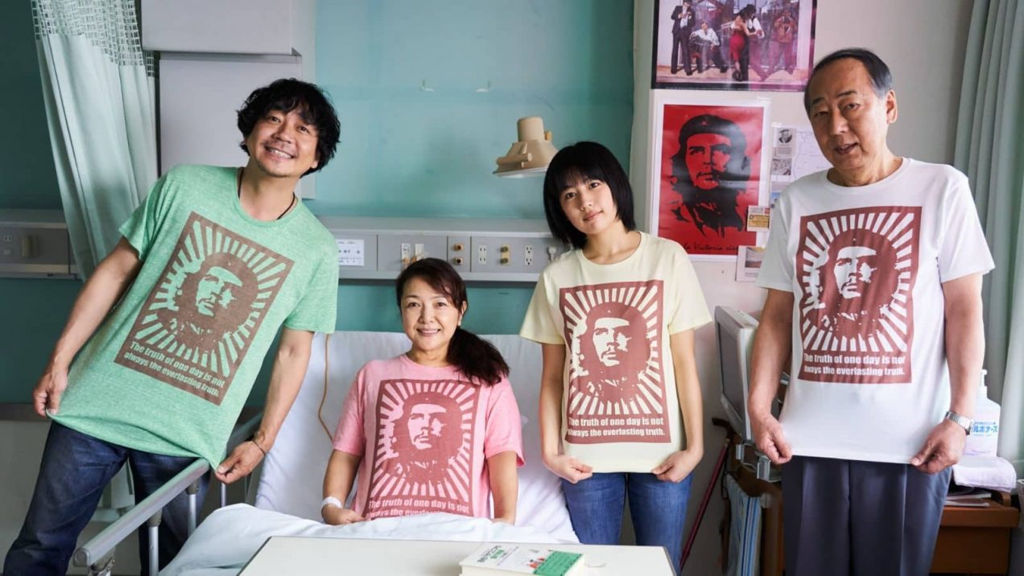 There is always that point in a story about a “white lie” where those who initiated the deception and work tirelessly to uphold it officially “go too far” and pass a level of harm that the original lie was meant to reduce. There exists a tipping point when the elaborate effort to uphold the lie is less about protecting someone and more about protecting yourself from said someone if the subterfuge were to be discovered.

For Katsumori Nojiri’s dramedy, Lying to Mom, there is no worry of toeing this line of extreme deception as its very premise —  members of a dysfunctional family lying to the matriarch about the suicide of their eldest son, the tragedy of which caused her to experience retrograde amnesia — is already grossly unjustifiable. Not that I am browbeating the film’s “moral failings” or whatever, but when a premise based on such intensive gaslighting is supposedly meant to be played as comedy, you start off on a particularly uncomfortable first step.

This spotlights an overall issue with the uneven tone of Nojiri’s tale of familial deception. Discovering the body of her reclusive son Koichi, a thirty-something, emotionally distant hikikomori (shut-in), swinging from the rafters of his room, the traumatic shock throws Yuko Suzuki (Hideko Hara) into a coma for several weeks. Awakened with a lapse in her memory, her family tells her the withdrawn Koichi has started working in Argentina for her brother Hiroshi (Nao Omori) to supposedly spare her of the pain of his death a second time.

Upholding the charade of Koichi’s South-American excursion are husband Yukio (Ittoku Kishibe) and daughter Fumi (Mai Kiryu), who are quick to overlook any reservations or objections about operating a 24/7 cover story for their recently deceased family member. Absorbed into an elaborate scheme involving forged correspondence and a radically snowballing list of lies and excuses, the inevitable endgame of the deception being uncovered only gets more damning and uncomfortable the more the film indulges in the antics of keeping it under wraps.

But Lying to Mom is a film that is unable to both have its cake and eat it. Emotionally ping-ponging between the quirky upkeep of the central lie and the gradual processing of the grief it elides over makes for an experience equivalent to tonal whiplash while watching. The gravity of their deceit is never really reckoned with by the characters in a satisfying way befitting the premise, nor does the fallout of the reveal feel particularly climatic or sufficient, given how far the concept is taken. And when Yukio and Fumi are given small windows in the bloated runtime to process their residual grief and quantify their memories of Koichi in between their ongoing scheme, these scenes come across as hollow and incongruous with the rest of the film despite the best efforts of the actors .

Riding a divide between comedy and tragedy, Lying to Mom never finds a comfortable middleground and flip-flops between emotions too frequently and unevenly. When your film’s premise is propped up on such an uncomfortable premise as gaslighting a woman so she doesn’t discover her son is actually dead,” hitting that tonal sweet spot is a Herculean effort.

A glowing recent example in this divide, The Farewell, presents the reality-manipulation of a loved one with deftness and skill, and the juggling of comedy and drama did not feel so abrupt and jarring. The emotional turns in Lying to Mom are sudden; the goofy subplot of the Suzuki patriarch routinely getting thrown out of a massage parlor due to mistaken identity can be followed up directly with Fumi having an emotional breakdown while reading a letter to her brother during a group therapy session.

Lying to Mom would not be so rough in execution if there was some finality to its intensive subterfuge or the half-hearted attempts at processing grief, but, as is, the film never quite figures out its identity. While the cast and cinematography serve as soothing balm, ultimately, the film’s disjointed feel proves to be a debilitating flaw.