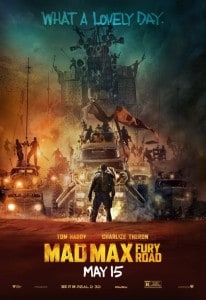 When it comes to film, the word “masterpiece” is not just a word but also an affirmation. It’s a label that is not meant to be thrown at just any film out there. It’s a declaration that must be warranted.

Think of films that have been declared masterpieces by critics and moviegoers alike – The Godfather: Part II, The Shawshank Redemption, Star Wars, Chinatown, Lawrence of Arabia. These are films that are looked upon and admired as cinematic achievements, and there aren’t many people out there who would argue with calling them “masterpieces.”

When it comes to George Miller’s latest installment in his Mad Max saga – 30 years after the last film was released – there doesn’t seem to be any other word that would aptly define just what Mad Max: Fury Road is. It may not be Lawrence of Arabia, but it is certainly a masterpiece in its own right. This is a masterful director firing on all cylinders to deliver one of the best genre films in years and possibly the best film of the year. What a lovely day, indeed.

The original Mad Max trilogy, which starred Mel Gibson, was considered an action movie benchmark. Miller committed to film some of the most amazing car chases you were to have likely seen at the time. Nowadays, car chase standards seem to have been established by The Fast and the Furious films – at high speed with quick cuts.

But when one thinks of classic car chases, often films like Bullitt, Raiders of the Lost Ark and Mad Max 2: The Road Warrior come to mind. The truck chase that concluded The Road Warrior is one of the most intense, visceral and exciting car sequences you will likely ever witness. 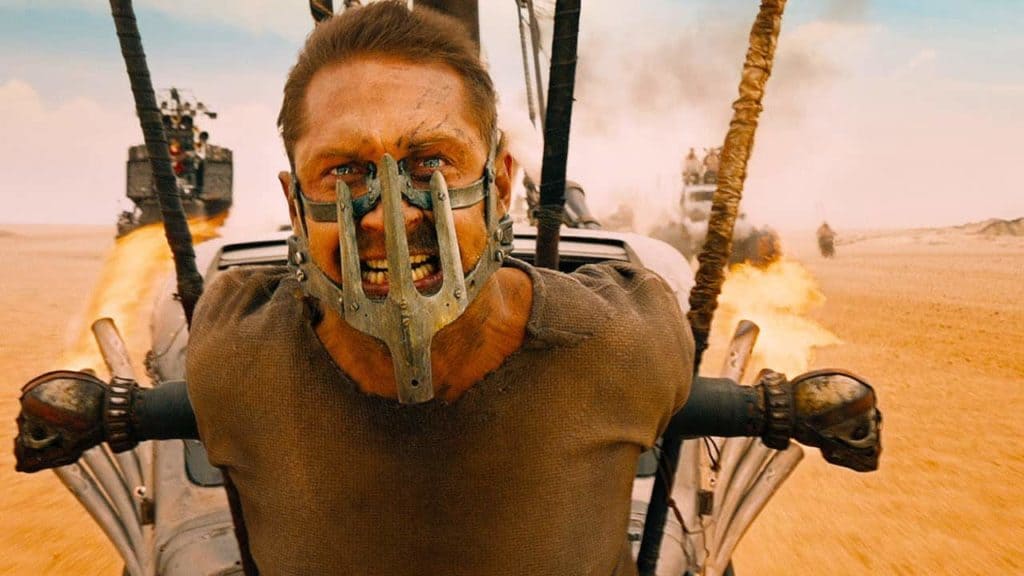 Not only did Miller conceive of this post-apocalyptic wasteland, but he also established an iconic character in Max Rockatansky and has given filmmakers a true standard to live up to. Who could have ever imagined that, nearly 30 years after the last film, Miller would return to create yet another new benchmark for action directors.

The film’s plot, written by Miller, Brendan McCarthy and Nick Lathouris, is a simple one. Max (Tom Hardy) and Furiosa (Charlize Theron) are pursued across the desert with precious cargo in tow.

If you’re going to this film for a deep, philosophical plot you’re in for great disappointment. Pure and simple, this is about the action, and Miller has essentially taken the best parts of his previous Mad Max films and elevated them to the next level. The film is one big chase. It’s a chase that spans the film’s fast-and-lean, 2-hour run time.

The Fast and the Furious movies, especially the latter ones, were known for their many set pieces that, in other films, would serve as their climactic ending. A high-octane car chase in the Furious franchise is just one of many sequences that occurs over the course of one film.

Miller has done something similar here. There are many sequences in Fury Road that would make for another action film’s grand finale. There is one epic sequence after another, and the stakes and carnage grow bigger and bigger as the picture progresses.

The stunt sequences in the film are sights to behold and are predominantly done practically with very little computer-generated imagery, or CGI. Miller and his stunt team must be commended for the incredible, jaw-dropping work that they pull off in the film. Many scenes are well choreographed symphonies of action and violence with car parts and bodies flying to and fro. 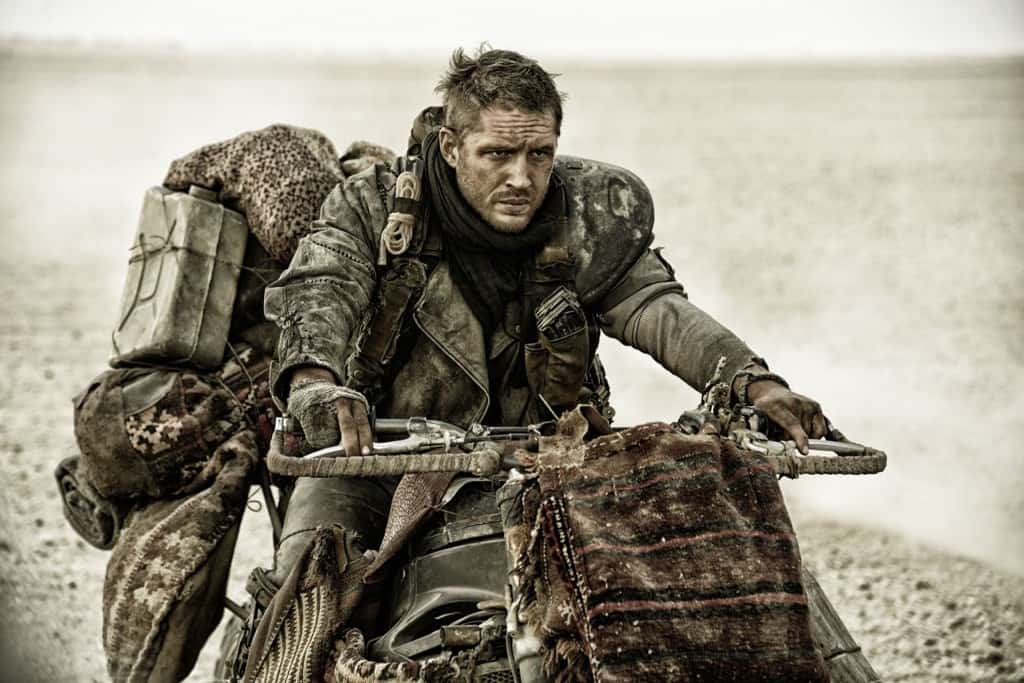 Thankfully, with all the activity, you never lose sight of just what’s going on, even during the most hectic of action sequences, and that makes you appreciate the stunts even more. In the annals of cinematic car chases, Fury Road firmly plants itself amongst such classics as Bullitt, The French Connection and The Road Warrior.

Fury Road also looks incredible. The cinematography by John Seale and production design by Colin Gibson are definitely nomination worthy. What Gibson has created is well captured by Seale and, at times, leaves you in awe of what you are seeing. This is best illustrated during the introduction to the Citadel and its inhabitants. In one scene, without giving anything away, you will gain a new appreciation for the word “manpower.”

The Mad Max films are often remembered for their vehicles, and there are so many in this one – some that will make your head spin. There are some seriously awesome vehicles in this film, and it’s more amazing to know that they are real and not CGI.

It’s been three decades since the last entry, Mad Max: Beyond Thunderdome (1985), so it was decided that the part of Max would need to be recast. However, instead of rebooting the series, Miller has stated that it’s the same Max who is just on a different adventure set between the second and third films. The titular character of Max is one of Mel Gibson’s most iconic roles, yet Tom Hardy ably steps into the role and makes it his own. Fans will not be disappointed by his portrayal, which, at times, will make you forget Gibson originated the role. 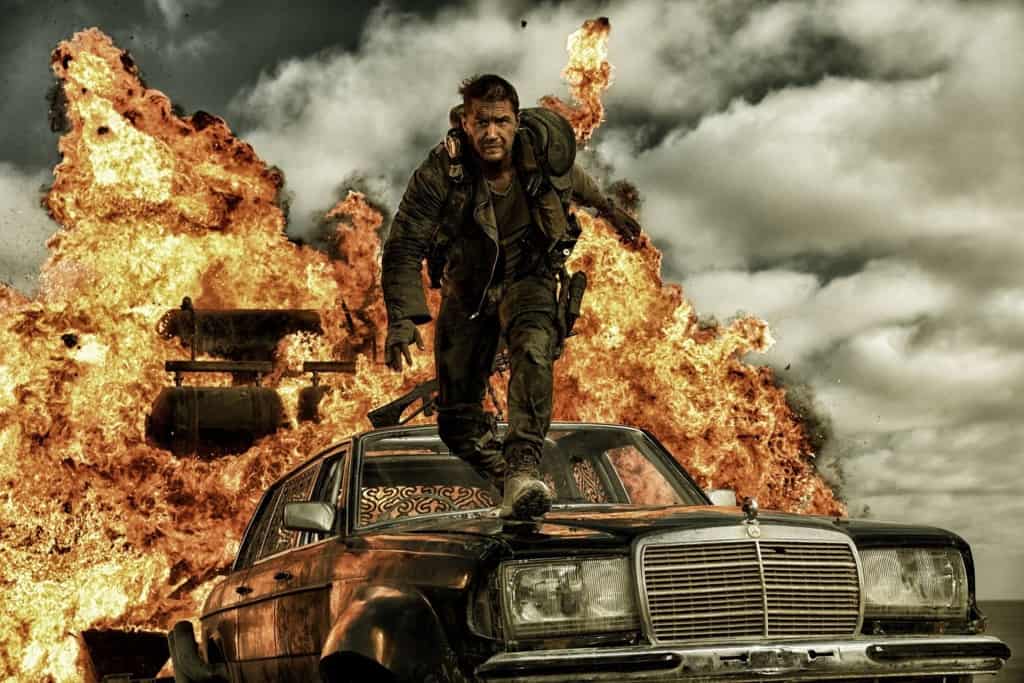 Charlize Theron is outstanding as Furiosa. She is a powerful, strong-willed woman who is a real bad ass. Nichols Hoult is very good as Nux, one of the crazed warriors in pursuit of Max and Furiosa. Hugh Keays-Byrne is fantastic as the villain, Immortan Joe and is reminiscent of The Humungous from The Road Warrior but amped up to “11.” Incidentally, Keays-Byrne also appeared in the first film as the villain Toecutter. Rosie Huntington-Whiteley and Zoe Kravitz also star, as members of the precious cargo.

It’s amazing to think that George Miller defined the genre with his ’81 film and has now returned to redefine the genre once again and set new levels in 2015. He has made what is arguably his best film and arguably the best film in the franchise.

It’s a visually stunning, jaw-dropping, operatic thrill ride about survival that will likely make you want to get right back on when it’s over. Action filmmakers should take note, as the master is back, and he’s again set a new standard. Mad Max: Fury Road is one not to miss and is one that demands to be seen in the movie theatre. Do not wait for home video.