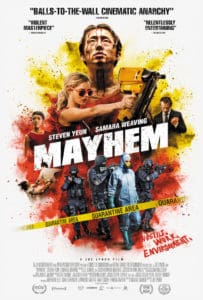 Loud, violent and inexcusably brash, Joe Lynch’s latest foray into grindhouse cinema plays out like Office Space, if all the characters were coked-up ’roid heads trying desperately to end each other in the most brutal way possible.

Mayhem stars Steven Yeun as Derek, an office drone who sells his soul for a bigger office on a higher floor. He is miserable in his station in life yet powerless to stand up for himself and seek other employment. He’s a shell of a man beholden to the awful human beings above him on the ladder, but all that’s about to change one fateful day when he gets fired for a mistake he didn’t make and a horrific virus is unleashed in the building.

This virus boosts the id while suppressing the other aspects of the psyche, causing those infected to have no impulse control and to act on all their desires. After the virus is detected in the building, it’s immediately put on lockdown while the CDC pumps a vaccine through the air vents; the only problem is that it takes about six hours to counteract the effects, providing just enough time for Derek to make his way up to the top floor and get some sweet revenge on the person who threw him under the bus. 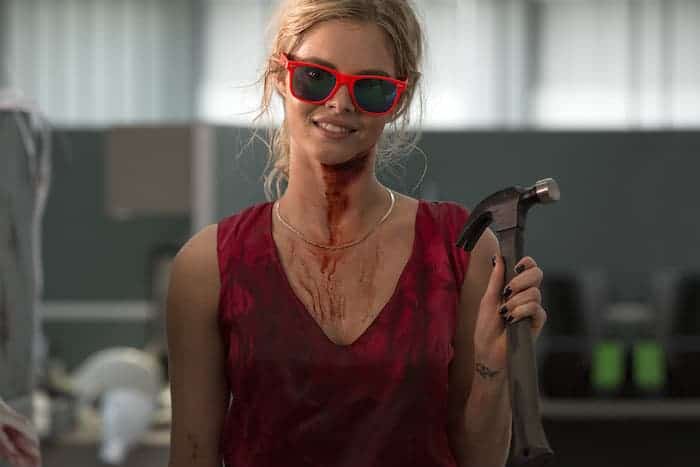 Aiding him in his bloody quest is Melanie, played by Samara Weaving, a down-on-her-luck borrower pleading with Derek’s company to give her an extension on her mortgage. After realizing Derek’s boss has the ability to wipe out her debt, she decides to help him, all the while getting her own payback against the company that tried to screw her over.

Similar in tone to another violent office thriller released this year, The Belko Experiment, Mayhem manages to surpass it in nearly every regard. Like Belko, Mayhem mixes comedy into its violence but does so in a far more satisfying and enjoyable way, opting for a less nasty approach in its humor.

Everyone has been infected, so even as we follow protagonists Derek and Melanie through this gauntlet of deranged coworkers, we’re always acutely aware that both of them are not themselves either, having no qualms about blasting someone with a nail gun or running a power saw through their gut. 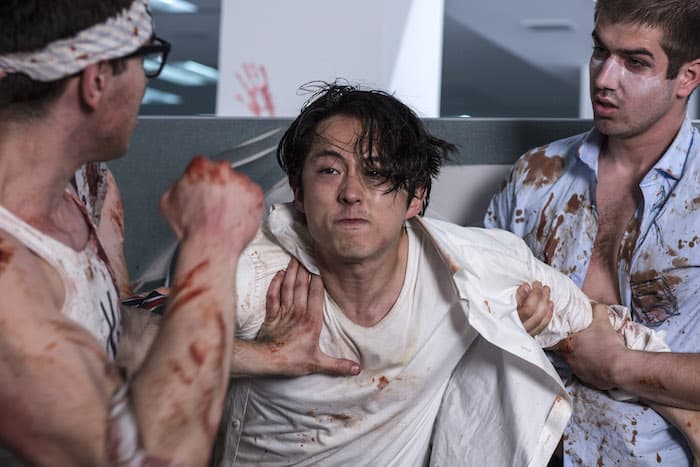 Though the plot is fairly rudimentary, Lynch frequently breaks from the action to further along the narrative, going against the film’s own title and causing luls that always feel too sudden and lengthy. It sets itself up to be The Raid or Dredd – with Derek and Melanie making their way up to the top floor, taking out baddies and mini bosses along the way – but it never quite hits that level of excitement.

That isn’t to say you won’t enjoy yourself with this bloody office thriller that I’m sure will satiate some fantasies in many white-collar workers out there. I don’t know if director Lynch worked an office job in the past himself, but this certainly feels like a well deserved middle finger to the worst aspects of that type of employment.