While known for their tales of preteen outcasts frequently exposed to the fantastic in all their whimsy and horror, Laika is nothing if not a studio that sees every new venture as an opportunity to push boundaries and defy the product stagnation that defines much of the competing animation studios.

Though, as one of the only major studios working exclusively in the production-intensive medium of stop-motion animation, this boundary pushing normally happens on the technical front as their rigging techniques and hybridization of physical and digital process gets smoother and more seamlessly integrated with each subsequent film. With Missing Link, the latest from director Chris Butler in his first solo directing venture after collaborating on the direction of ParaNorman, Laika attempts to break new storytelling ground with a refreshing throwback to the globetrotting adventure serials of exotic exploration that once inspired the likes of the Indiana Jones franchise.

An expected technical feast for the eyes as Laika’s animation technique continues to improve between each feature, Missing Link‘s bold story directions and delightful balancing of both heart and epic action are the true marvels of Laika’s latest feature.

Set in the 19th-century era of imperialism and colonization that perceived the majority of the world as “undiscovered” lands waiting to be conquered by the great explorers of the “civilized” world, Missing Link follows one such hopeful in these ranks, Sir Lionel Frost (Hugh Jackman). An expert in cryptids and mythical beasts, which makes him an outcast of sorts among his peers of explorers who would rather conquer the natural world than study it, Frost is contacted by Link (Zach Galifianakis), a lonesome sasquatch who is quite soft spoken and self-conscious for the mythical bigfoot, with a proposition to stand as the proof of his life’s research as long as they can locate his lost yeti brethren in the Himalayas. 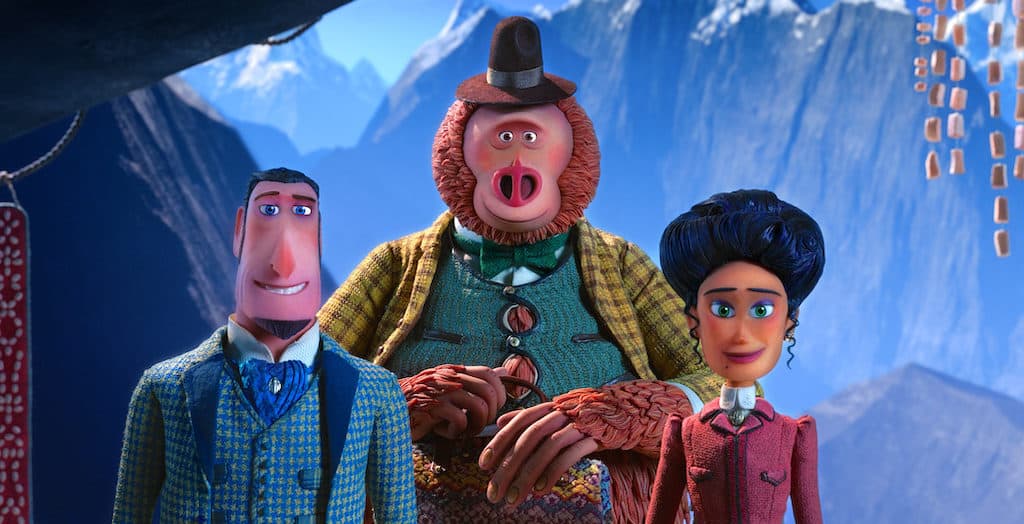 Much of the film is structured like a dry, bumbling buddy comedy, working off the natural chemistry that comes between these characters and their civilized-meets-rustic dynamic that net some of the biggest laughs in the film. A recurring gag of Link’s overly literal interpretation of every figure of speech Frost uses (such as the particularly cute “crack open a window” scene in the trailer) nearly gets old if the scenes weren’t sandwiched nicely between delightfully silly flourishes of physical comedy and action as they travel from the Pacific Northwest to the mythical Shangri-la. Joining them is Adelina Fortnight (Zoe Saldana) who shares a love-hate relationship and messy past with Frost, and who initiates the majority of the more tender moments in the script.

It’s important to note the vitality that the voice cast brings to these exceptionally designed characters. It’s quite easy to miss a performance like Timothy Olyphant as a devilish bounty hunter, Stephen Fry as the pursuing rival explorer or Emma Thompson in a surprising turn in the climax on the virtue of how efficiently they embody the 17-inch-high puppets Laika toiled to create, down to the most insignificant detail. All together they form one of the studio’s strongest overall casts, making the scenes of saloon brawls, cruise ships spinning in sea storms and frozen-peak traversing all the more endearing.

While it is a predominantly character-driven piece, wherein Link and Frost grapple with their respective legacies where their shared adventures deepen their relationship from partners to friends, the set pieces of Missing Link add a nice texture to what would be just a rather dry but enjoyable comedy of errors. Butler’s globe-circling script piles on action scenes Butler’s globe-circling script piles on action scenes, not seen since Laika’s production of Kubo, to mixed but overall exhilarating results.

Despite Missing Link’s many creative aspects, the pacing in these set pieces is curtailed slightly due to the requirements set by the animation style. Some of the action can feel stilted and awkward when we are used to the sensory overload of today’s modern action films, but I assume most kids won’t notice the more deliberate motion of the more exciting scenes.

Missing Link continues on its roll of charming, deceptively masterful animated films that the studio has been on since its inception. Its simple premise and more traditional approach to storytelling might rob it of the staying power of the studio’s bolder prior works, Butler’s film has a classic adventure niche and knows exactly how to wield it for optimal results.