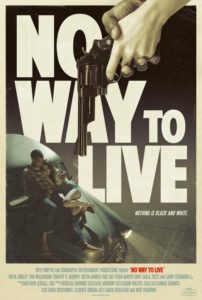 Set in the waning years of the Jim Crow South, Nick Chakwin and David Guglielmo’s No Way to Live presents a tightly wound thriller that delivers a solid noir experience with plenty of twists and turns to keep audiences on their toes.

The film opens with protagonist Monty (Tom Williamson) getting a gun pulled on him after attempting to sell a vacuum cleaner to someone who clearly has a problem with darker skin tones, only to catch a glimpse at his daughter and instantly fall in love. Trying to get a glimpse at her later that night, Monty ends up stepping on a gator trap in their yard, causing the man and his daughter to take him in and help with his wounds.

As Monty heals, he grows closer to the young woman, Nora (Freya Tingley), and after discovering that her father is sexually abusing her, the two decide to steal all the cash the man has laying around and head off to Mexico for a better life together. After only a short while on the road, however, it becomes clear that Nora has ulterior motives, and Monty may not be in the loving relationship he originally thought.

As the two travel the country roads through the South, Chakwin and Guglielmo are quick to remind us how turbulent life was was for people of color in pre-Civil-Rights-Act America, especially for an interracial couple. Although this is a concept touched upon early, it’s hardly the focal point and merely a byproduct of the time and place the characters are in – that is until there’s a big reveal that proves to be the catalyst for one of the film’s biggest twists, which I dare not reveal here.

Littered with thematic 180-degree turns, No Way To Live makes several significant shifts in the narrative that are punctuated by major character twists. Some of these are more telegraphed than others, and each beat causes the story to become darker and more depraved. The audience is played for a fool from the onset, and that only aids in the pulpy nature of the film that immediately reels you in once you realize all bets are off.

No Way to Live is a nasty little indie thriller that begins as a tragic story of love in a time when it was forbidden but evolves into something more akin to Natural Born Killers than Loving. It’s a surprising turn of events and certainly one worth checking out. Plus, it has a bunch of great split diopter shots and Larry Fessenden as a skeezy redneck…can you guess if he gets killed?