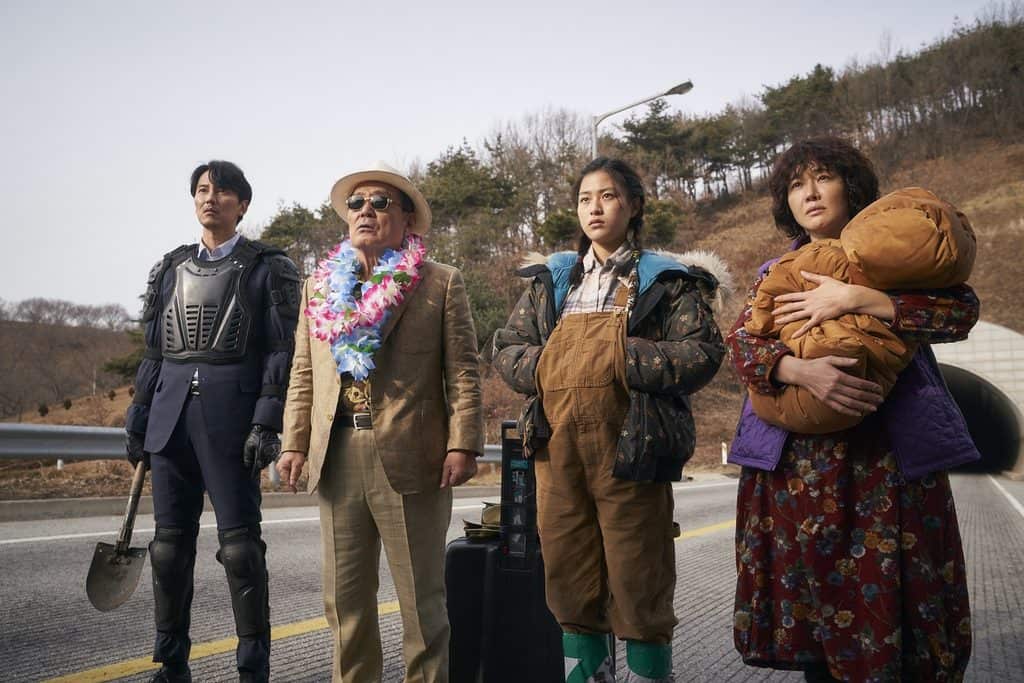 One of the lesser aspects of late-2000s millennial culture was our incessant fixation with zombie media, which reached an intense and insufferable saturation point. The horror subgenre became as lumbering and lifeless as the flesh-eating ghouls it tried desperately to repackage every couple of months, and it really wasn’t until Yeon Sang-ho’s Train to Busan and its audacious craft did the genre feel fresh again.

In a similar vein, The Odd Family: Zombie for Sale arrives in the shadow of the justifiably more well known South Korean zombie film but carries with it an equally unique premise and approach to the exhausted subgenre while defining itself through the collective chemistry of its stellar cast. Although it only sets its limited sights on being a quirky family comedy with the added hook of zombieism thrown into the mix, Lee Min-jae’s directorial debut proves sometimes it is enough to just do one thing and do it well.

The strongest quality Odd Family has going for it is how long the film sustains itself while keeping zombies an almost tertiary element to the script. A pharmaceutical company and its illegal clinical testing on vagrants has produced living-dead-type people and kept them entirely under wraps from the public. 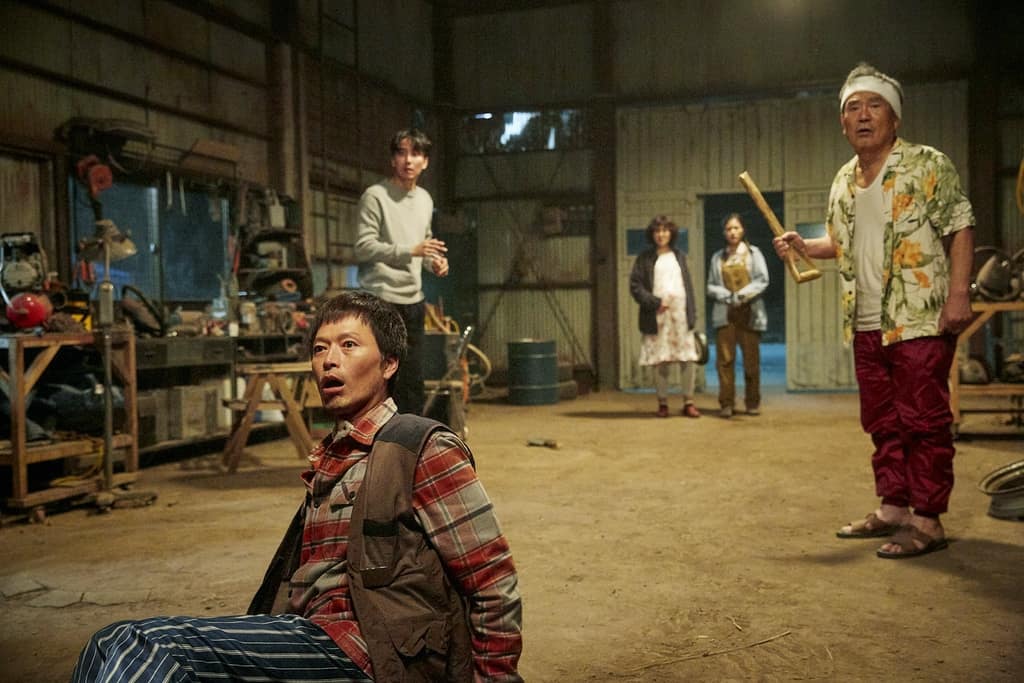 One such victim (Jung Ga-ram) escapes and dodders off into the dysfunctional arms of the Park family, an oddball clan of outsiders who run a failing service station in the sleepy, aging town of Poongsan, fleecing who they can to survive. Headed by grieving patriarch Man-deok (Park In-hwan), bumbling son Joon-gul (Jung Jae-young) and his stern pregnant wife Nam-joo (Uhm Ji-won), the zombie attacks Man-deok and, rather than infecting him as is generic tradition, revitalizes him and makes him younger.

Seeing dollar signs in the undead prospect now tied up in their barn, the family, at the behest of estranged, greedy son Min-gul (Kim Nam-gil), retrofit their service station into a clinic of sorts, offering the elderly citizens of Poongsan new life in exchange for cash and a nasty bite wound. All the while, youngest and most isolated Hae-gul (Lee-soo-kyung) begins to feel a kinship for Jjong-bi, a name that she gives him (say it out loud) and essentially adopts him into the family.

While Odd Family indulges heavily in letting these strong character actors play off one another to delightful effect and chemistry, it refreshingly avoids the tropes that have become so ingrained in the subgenre. After putting together what Jjong-bi is, the natural, well developed characters take over and set out to monetize his properties to silly but earned comedy. 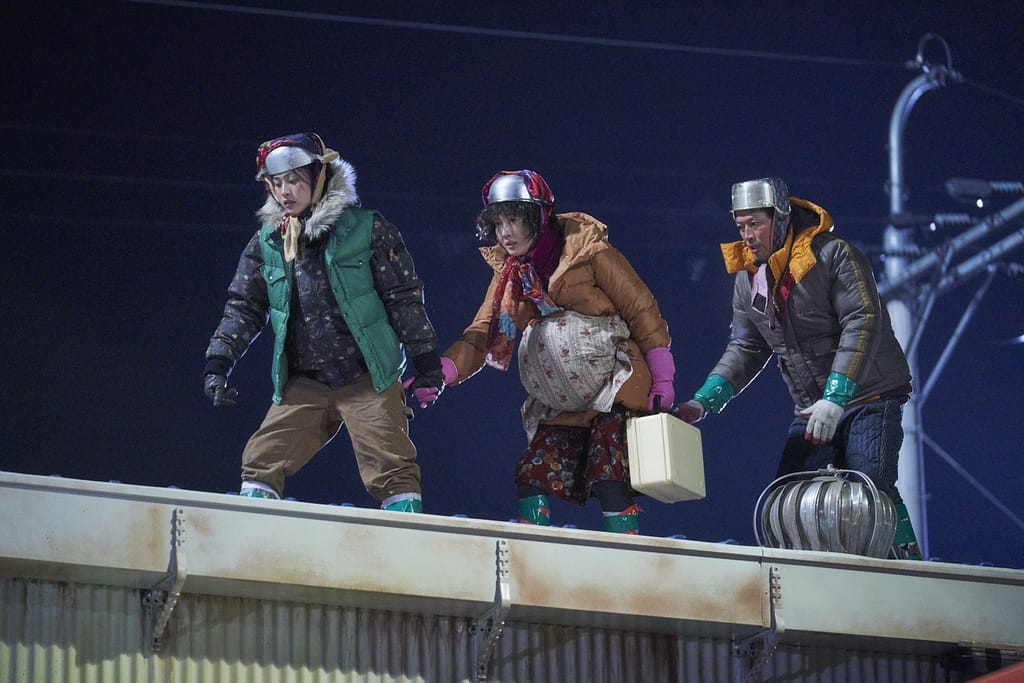 The cast does more heavy lifting here then the premise and radiate such genuine playful antagonism and messy affection as beleaguered siblings whose roots unfortunately tie them to an abandoned gas station. Coupled with the playful, experimental manner in which Lee Min-jae shoots (which shows how adept he is at using his frame and cuts to add more visceral impact to jokes), you almost forget the “zombieness” of the whole film and just revel in the Parks’ infectious quirk and dysfunction.

Inevitably we find our way to the mass-infection, outbreak scenario, which has come to define the genre, and the film loses a lot of the luster and fun it exuded in its earlier scenes. Giving into the genre, it couches itself as another climatic survivalist drama, robbing Odd Family of a lot of its unique charm as a character study, especially in some final scenes with the infected horde. This is a minor complaint of course, as the film is all-around delightful even duringthese more routine plot turns, but it’s worth noting its ending is by far its weakest point. 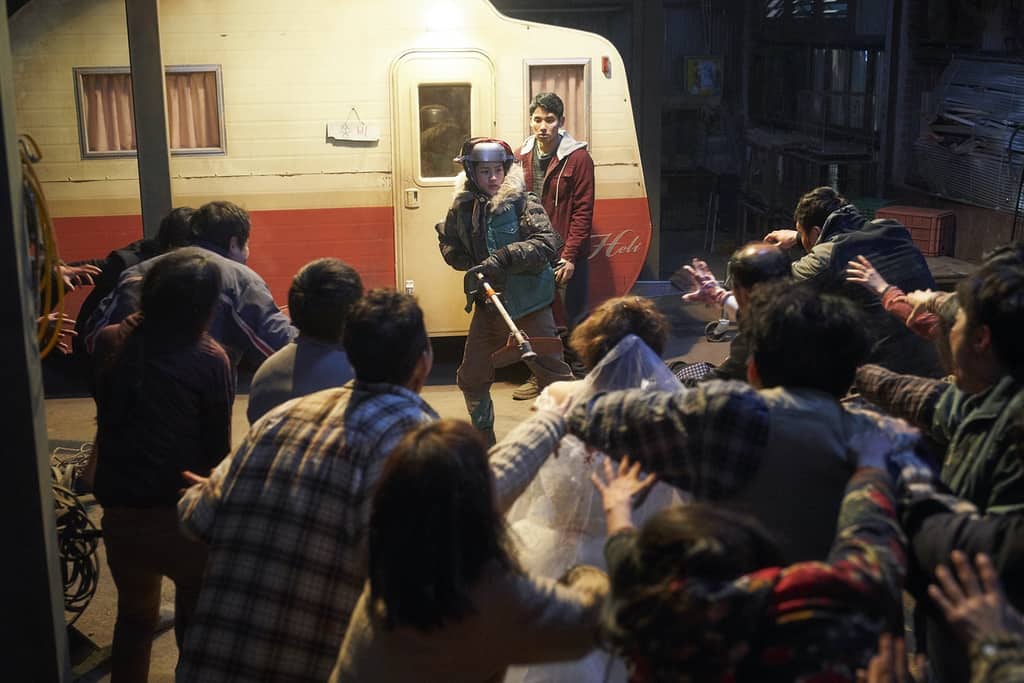 Regardless, The Odd Family: Zombie for Sale is a fresh, enjoyable, creative take on the cut-and-dry subgenre that we are all properly sick of,  building its foundation not on a hook but on strong, believable characters and their interactions when faced with the undead. One might be reminded of the equally revitalizing genre work on display in Shinchiro Ueda’s One Cut of the Dead from last year’s NYAFF while watching, which effectively flipped the genre on its head to produce a meta-cinematic character study of its over-the-hill director wading into a tired, dead genre. While not as radical, The Odd Family will still have you convinced zombies have as-of-yet untapped cinematic potential.