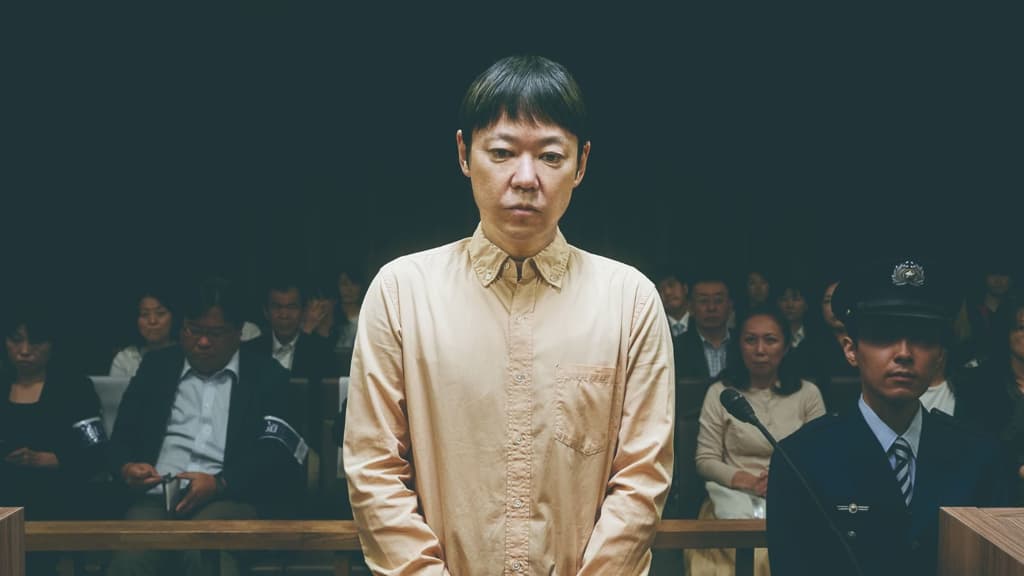 At the center of Kazuya Shiraishi’s Lesson in Murder is a fascinating, anchoring dynamic between two characters that deliberately takes its cues from the psychological tête-à-tête featured in the likes of Jonathan Demme’s The Silence of the Lambs. Like there, the mental joust of manipulation and deceit falls between a naïve yet resolute student and an eccentric and intelligent murderer (with a penchant for mind games) and unfolds through an assemblage of weighty dialogue scenes between them, all under the pretense of understanding the modus operandi of another serial killer on the loose.

Much as in Demme’s adaptation of Thomas Harris’ thriller, these same sequences in the Blood of Wolves director’s adaptation of Ryu Kushiki’s novel prove to be where Lesson in Murder finds solid footing and truly comes alive against an inordinately busy plot of twists and turns built upon one another, which occasionally dilute the overall impact.

The student, ostensibly occupying the Starling role, is Masaya Kakei (Kenshi Okada), whose quiet, gloomy demeanor and mounting resentment toward his lot in life has labeled him an outcast at his third-rate university. With no social life to speak of and feeling the burden of his abusive household, he throws himself at the first bit of direct communication thrown his way: a correspondence from Yamato Haimura (Sadao Abe) as he awaits his execution on death row.

The former proprietor of a bakery frequented by Masaya in his teenage years, Yamato has been convicted of 24 brutal murders involving torture and bondage — which Shiraishi is unperturbed to show in graphic flashback montages in some of the film’s most tonally audacious scenes — and has sent out a surprise lifeline to Masaya despite, their relationship, such as it is, being ill defined. Despite being a confessed multiple murderer who has no qualms expounding on the details and motives of his crimes, Yamato has called upon Masaya to reveal the 24th victim was not his and, thus, another killer is on the loose.

As one would expect, this revelation sets Masaya off on a meticulous and exhaustive investigation over the particulars of the case, which gradually absorbs him into Yamato’s enigmatic worldview. Masaya digs into every minute aspect of this 24th murder, even as it drives him further away from his dormant desire for normalcy. Utterly consumed by the details of Yamato’s crimes and the unexpected connections between him and Masaya’s mother (Miho Naka), he gradually wrestles with why he is so invested in the first place and, above all, why he was contacted in the first place.

Ryo Takada’s treatment of the source novel is one that values the detail-oriented approach to its dramatic tension above all else. Consequently, Lesson in Murder’s narrative can quickly become convoluted with shocking revelations designed to tie the two central characters closer together but mostly work to muddy the lucidity of the plot and let the air out of the supposed tension of the serial killer hunt.

While delicately tiptoeing around spoiler territory, none of the narrative developments that come from Masaya’s meticulous investigation are given a moment to breathe or to register their apparent impact. The same nagging issue befell Shiraishi’s The Blood of Wolves, where the excitable dynamic between up-and-coming detective Shoichi Hioka (Tori Matsuzaka) and grizzled and corrupt Shogo Ogami (Koji Yakusho) was let down slightly by the messy case they were tasked with investigating.

That being said, the film’s saving grace, in light of its circuitous narrative, is the menacing back and forth between Okada and Abe. Abe’s unassuming yet sinister matter-of-factness as the bizarre Yamato against Okada’s slowly declining sense of control as the unwilling pawn in his game, the dynamic between the two offers such satisfying sequences of the two hashing out the growing details over this case.

The scenes where they are caught between the glass of a confession booth — Shiraishi sharply cutting around the power exchange happening and suggestively projecting flashbacks on the walls behind them for thrilling emphasis — are where the film truly comes into its own. Filmed with gutting tension, electrifying direction on Shiraishi’s part, head-scratching revelations, and two stellar performances filling out the modest set that work off one another effortlessly, the film makes it clear that the dynamic between these two can anchor even the most unruly of plot developments on which Lesson in Murder embarks.
Lesson in Murder has the qualities of a pulp novel that teases until it overwhelms, in the hopes of surprising its reader. Shiraishi’s film may arrive at a moot climax in terms of its narrative (a.k.a. the identity of the killer on the loose), but the fascinating depth is found in how the film builds around its characters and makes their dynamic the soul of its convoluted exercises in plot digestion. Whenever it finds itself on the cusp of losing its audience, this central dynamic and Shiriashi’s slick direction always find a way to keep them invested.