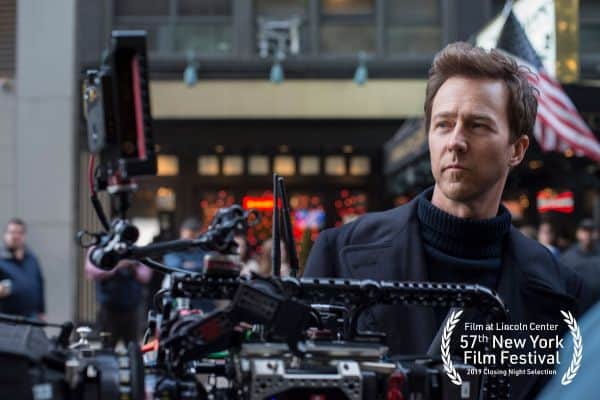 As this year’s New York Film Festival approaches, it was announced today that Edward Norton‘s Motherless Brooklyn has been selected as the closing night film. Norton stars as a detective in this ’50s-set noir that also stars Bruce Willis, Willem Dafoe, Gugu Mbatha-Raw, Bobby Cannavale, Leslie Mann, and Cherry Jones.

Take a look at the full released below and for more information on the 2019 NYFF, head over to filmlinc.org.

In an unusually bold adaptation, writer-director Edward Norton has transplanted the main character of Jonathan Lethem’s best-selling novel Motherless Brooklyn from modern Brooklyn into an entirely new, richly woven neo-noir narrative, re-set in 1950s New York. Emotionally shattered by a botched job, Lionel Essrog (Norton), a lonely private detective with Tourette syndrome, finds himself drawn into a multilayered conspiracy that expands to encompass the city’s ever-growing racial divide and the devious personal and political machinations of a Robert Moses–like master builder, played by Alec Baldwin. Featuring a rigorously controlled star turn by Norton and outstanding additional supporting performances by Bruce Willis, Willem Dafoe, Gugu Mbatha-Raw, Bobby Cannavale, Leslie Mann, and Cherry Jones, plus a haunting soundtrack (featuring a score by Daniel Pemberton, with orchestration by Wynton Marsalis, and an original song by Thom Yorke), Motherless Brooklyn is the kind of production Hollywood almost never makes anymore, and a complexly conceived, robust evocation of a bygone era of New York that speaks to our present moment.

New York Film Festival Director and Selection Committee Chair Kent Jones said, “Edward Norton has taken Jonathan Lethem’s novel as a jumping-off point to craft a wildly imaginative and extravagant love letter to New York, a beautifully told hard-boiled yarn grounded in the mid-20th century history of the city. What a way to close the festival!”

“NYFF has been my hometown festival for nearly 30 years, and it’s consistently one of the best curated festivals in the world,” said Norton. “Every year I look forward to meeting up with old friends and colleagues to go watch the year’s best films in their program. NYFF always perfectly straddles everything I love about the movies. They balance serious audiences and thoughtful conversations about film with just the right level of glamour and celebratory fun. To have this particular film—which grew out of my love affair with New York—selected for Closing Night is just a huge thrill . . . a dream come true, actually.”

Tickets for the 57th New York Film Festival will go on sale to the general public on September 8. Festival and VIP passes are on sale now and offer one of the earliest opportunities to purchase tickets and secure seats at some of the festival’s biggest events, including Closing Night. Support for Closing Night of the New York Film Festival benefits Film at Lincoln Center in its non-profit mission to support the art and craft of cinema.