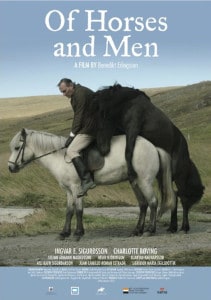 Part romantic comedy, part cool and sometimes-condemning reflection, writer/director Benedikt Erlingsson’s Of Horses and Men is both comedic and stoic. Shot against the moving landscapes of his native home of Iceland, an ensemble cast blunders its way through a series of small stories that often end with death, either human or equine.The relationships between the villagers in the remote Icelandic countryside are purposefully mirrored in their relationships with their respective horses, and while the mood is often jolly, it’s within these moments of lightness that the storytelling tends to shift sharply into a much darker territory, resulting in an experience that can be downright uncomfortable at times.

Given the film’s title, Of Horses and Men, and a number of lovingly composed shots wherein the eye of a horse encompasses the frame, reflections of barbed wire contain within them along with Erlingsson’s unquestionable admiration of these beasts, one may be led to believe that film’s actions are seen from the perspective of the horses themselves; yet it’s displayed through classic film language that unfortunately leads the viewer to consistently connect emotionally with the humans in the frame, rather than their equine counterparts, leaving the film to feel far more about human desires and emotions while the horses themselves are merely implicated in the personal pursuit.

The first scene, Ingvar Eggert Sigurðsson plays a man trying to place a harness and bit on a stunning white half-wild mare in his keep. From the very beginning, if you feel that going into this film you will be inspired by the beauty and freedom of horses roaming the plains, you have been fooled. The shots progress, and he mounts her, maneuvering the mare in a very formal, even prance like, style. This is the first time we see him from head to toe, a reveal of even his clothing remarks on his relationship to the animal. As it becomes obvious he is riding to impress those who might see him, from across the landscape the reflection of many lenses can be seen in the sun. Each of the neighbors holds a set of binoculars or a small telescope up to see the show. As he approaches, he ties the mare to a fence, and goes inside to have tea with a woman and her family while a black stallion outside is willing to break his fences down to try and have a turn with the white mare.

After dining with the family, the rider returns to his horse, at which point, the stallion mounts the mare with the rider on her back. Incensed and humiliated, the rider responds in anger toward the mare, killing and burying her. His dramatic reaction to the animals’ behavior serves as a comment on human hostility as the behavior of the untamed horses stands in contrast to the rigidity and fallibility of humanity’s often misguided attempts at controlling and taming what is natural and wild.  Yet the message is lacking in its simplicity, and the film ultimately offers little in the way of a new narrative tradition. Indeed, the film itself seems to propose that humanity is destined to repeat itself, with the film’s closing images of village men corralling a new heard of wild horses to be tamed and used for their own needs.

The film, which is dedicated to Erlingsson’s mother, is constructed as a series of small, narrow glimpses into the present-day life of the village in which it’s set. While some moments are unpredictably lovely, others seem forced, if not overly dramatic, despite their believability. Perhaps the film is ultimately hurt by its title, which perhaps promises more than it delivers in regards to the relationship between humans & horses; such a grand title seems to imply a deeper consideration of the subject than what the film ultimately gives. Despite the film’s shortcomings, the performances are satisfactory and viewers will find themselves immersed in the beautiful cinematography set against the Icelandic landscape.