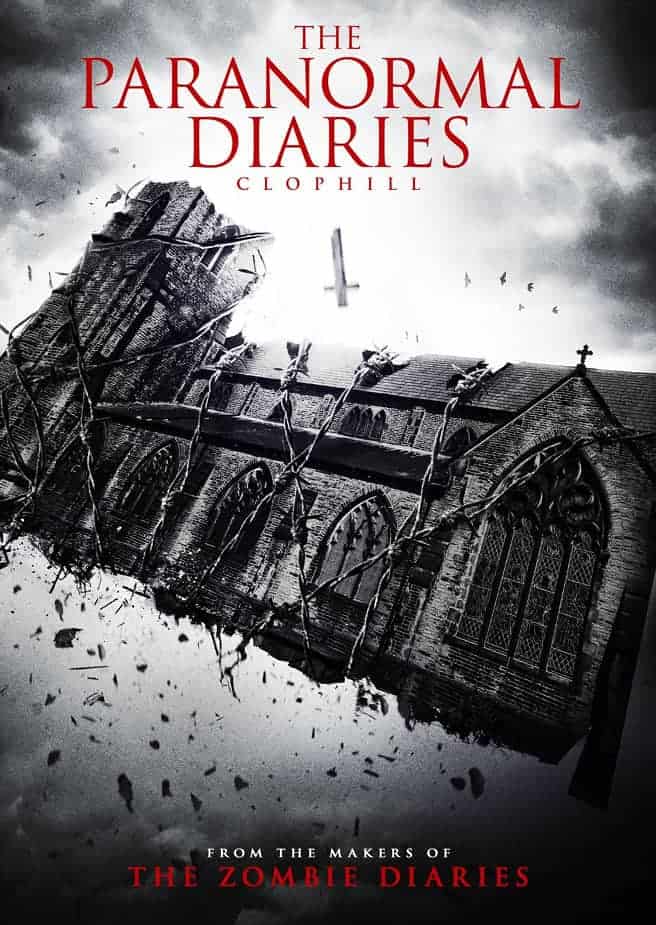 These days, found-footage horror films are a dime a dozen, and while most of them attempt to add something new and fresh, they rarely ever do. Directors Michael Bartlett and Kevin Gates are quite familiar with the genre, having previously directed The Zombie Diaries, and now their latest effort, The Paranormal Diaries: Clophill, aims to once again present itself as a documentary, exploring the paranormal occurrences of a very real place. But does this film set itself apart from the multitude of docu-style horror films that have been coming out seemingly every week for the last few years? Unfortunately, no it doesn’t..

There are a few interesting aspects of The Paranormal Diaries: Clophill, but the plot isn’t one of them. The story revolves around a group of documentary filmmakers who hire some paranormal investigators to explore the infamous St. Mary’s Church in the village of Clophill in the UK. This is a very real place that has had a sordid history of rituals, black magic and cultist activity, and it’s a hotbed for paranormal research.

Through plenty of night vision cameras and handheld shots, much of the film plays out like an episode of Ghost Hunters and winds up being just as exciting, as in not at all. The gang uses real ghost-finding equipment, such as EVP meters and Ouija boards, in an attempt to contact the otherworldly beings. Yet much like how it would play out in real life, there’s a whole lot of nothing going on. Sometimes they’ll think they heard something or spot some animal bones or worms on the ground and freak out a bit, but for the most part the film remains uneventful ‘til the finale.

Like The Blair Witch Project, Paranormal Activity and literally dozens of others, this is a slow-burn horror film, which I actually prefer over the high-octane slasher variety, but the lack of originality makes everything in this film feel tired and played out. That isn’t to say there aren’t a few bits of freaky imagery, some surprises at the end, and some jump scares, but they just feel cheap and nonsensical at times.

The interesting thing about The Paranormal Diaries: Clophill is that some of the elements are based in reality. The directors use non-actors for their interview subjects; real stock footage is used when describing some of the backstory behind the church; and the place itself is very creepy. Too many films like this lose the illusion of reality due to poor performances, however in this film, the lines are truly blurred. Sticking close to the realism means of course dialing back anything outrageous that may happen as a result of the investigation, effectively making the story even more dry. There’s no big crescendo here, but it does manage to end on a slightly unsettling note.

The DVD release for the film contains a number of deleted scenes and two commentary tracks with the cast and one of the film’s directors, making one wonder why the other writer-director, Michael Bartlett didn’t participate. Other than that, there are no other special features. It comes in a clear DVD case, which is cool, except for the fact that the inside art is just an ad for Image Entertainment’s other home video releases. The DVD menus are fairly well done, and the video quality is decent for a DVD transfer, but with a movie like this – largely shot on smaller video cameras in the dark with night vision – it hardy matters.

In the end The Paranormal Diaries is just another forgettable entry in the seemingly never-ending onslaught of found-footage and mockumentary-style horror movies.