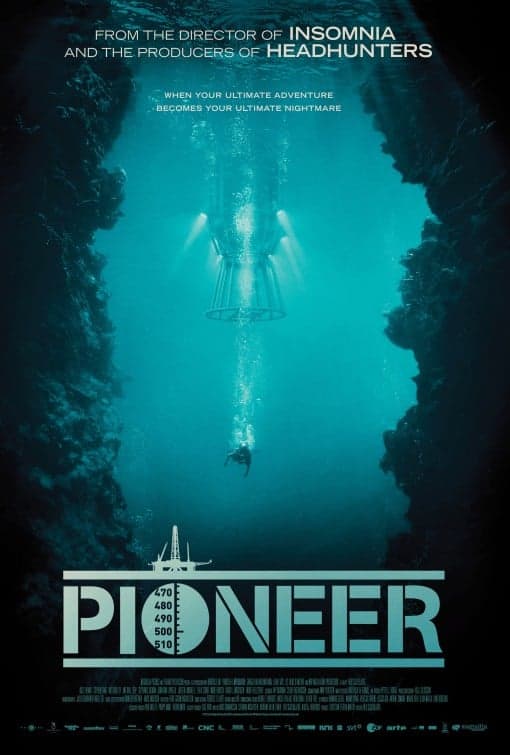 It is the late 1970s and early 1980s, and Norway is in the midst of an oil boom. The Norwegian government has contracted internationally crewed drill teams to get things set up as the oil rigs are prepped for delivery. Petter (Aksel Hennie) and his brother Knut (Andre Eriksen) are two of the first divers to attempt to set up a hub in the ocean depths.   During their mission, something goes terribly wrong, and Knut is lost in a tragic accident. While trying to find out the cause of the accident and ensure this accident doesn’t happen again, Petter finds himself involved in a perceived conspiracy and cover-up.

Directed by Erik Skjoldbjaerg, who made the original Insomnia, this political/corporate thriller comes up quite a bit short. It’s as dry as Tinker, Tailor, Soldier, Spy but not as engrossing, which can be a bit of drag for some viewers and is unfortunately often clichéd. It’s not overtly predictable, but astute viewers will recognize the typical genre tropes. The film is inspired by true events so one has to wonder just how much is fact and how much is fiction. No fewer than five writers, including Skjoldbjaerg, were involved in writing this screenplay, so it seems there were too many proverbial cooks in the kitchen.

To the director’s credit, there were some scenes that were incredibly well done, such as the underwater sequences, but there were others that will have you scratching your head and chuckling at their implausibility. The best parts of the film are the scenes where the crew is doing its job. The scenes in the pressure chambers are fascinating and amusing.   The deep-sea drilling sequences are on par with the work James Cameron did with The Abyss, and cinematographer Jallo Faber did a great job of capturing the pitch black of the sea and contrasting it with the beauty of Norway.

Aksel Hennie is adequate as Petter. He comes off as determined and effectively portrays the symptoms caused by the accident. The viewer can’t help but root for him as he tries to get to the bottom of why the accident happened. And even when the story seems to grow a bit familiar, his performance is strong enough to keep your interest. Unfortunately, it becomes more of a curiosity than a bona fide interest. The film also features Wes Bentley and Stephen Lang as a pair of Americans. Bentley’s talents are pretty much wasted, and Lang is just playing the stereotypical foreman with a vested interest in the operation. It felt like their presence in the film was only to add some better-known names on the movie poster.

As thrillers go, Pioneer is not that thrilling. Your curiosity may be peaked enough to find out just how it all ends, but one has to sit through a slow 111 minutes to get there and, for some, may not be all that satisfying of a conclusion. This certainly isn’t in the same league as Insominia, but not many films are. At any rate, there’s a decent story there, just not a great execution of its telling.