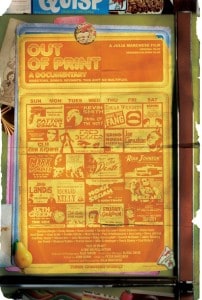 Think back on the last movie you watched. Where and how did you watch it? On your laptop? On your phone? On Blu-ray or DVD? In a movie theatre? Regardless of how films are ultimately distributed they are always meant to be seen on the big screen with an audience. Good or bad, ultra-low or sky-high budgeted, recent release or over a century old, movies were meant for movie theaters. When films are out of circulation that is where the repertoire theaters come in. Revival theaters, as they are also referred to as, screen films that are no longer in circulation. Often these theaters will screen a film in whatever format is available to them, on film, via Digital Cinema Package (DCP) or even off a blu-ray if necessary. Nearly all the films screened are readily available on some home format. So this begs the question, why would you want to see something in a theatre when you can just watch it in the comfort of your own home? Julia Marchese’s entertaining documentary looks to answer that question and more as she examines the revival cinema culture, film preservation and the palpable impact of recent developments in film exhibition.

It was around 2010-2011 or perhaps earlier that film exhibition changed forever. Nearly all theatres had converted to digital cinema and no longer show films on film. Even discount theatres are now all digital. Many studios have declared they will no longer distribute their motion pictures on film. The benefit of using a DCP is that the film will always look the same from first play to last. Despite this, DCP is not without its problems.   The stigma that it’s really not that far removed from watching a blu-ray being projected on the big screen is always present. For every stellar DCP there is always one that is subpar. Audiences today are growing accustom to seeing films on DCP and have probably already forgotten what it was like to see something projected on film. Through interviews with numerous directors, such as Joe Dante, Joe Carnahan, Kevin Smith, Rian Johnson, Marchese sheds light on why the format is important, what the differences are and why it’s so important for studios to make available and maintain their film libraries.

When you go to a movie theatre you probably don’t give it much thought. The culture of revival cinema seems like a niche market and those cities that have them are fortunate. The New Beverly Cinema in Hollywood, CA is probably one of the most well known revival houses in the world. The New Bev is a single screen theatre with a rich history that has been showing double features for a low price on a daily basis since 1978.   Marchese examines the theatre’s history and what is so special about seeing a film at the New Beverly. Directors, actors, regular customers and employees reminisce and share their stories about their New Beverly experience. For this viewer, seeing The Adventures of Buckaroo Banzai on the big screen for the first time since it opened in 1984 was the beginning of a long relationship with the Bev. Unlike the megaplex the documentary emphasizes how a theatre and film itself can create a tight-knit community of film enthusiasts. It’s a family and that point is driven home so poignantly when Marchese focuses on one of the theatre’s beloved regulars, actor Clu Gulager and the sudden passing of the theatre’s previous owner, Sherman Torgan.

Marchese also shows that revival cinema isn’t just in Hollywood but all over the world. She even pays a visit to the Prince Charles Cinema in London where they share the same level of enthusiasm for film and the 35mm format. However, she also delves into the sobering impact that the new digital format is having on these theaters. Many of them are family owned, independents that simply can’t afford the upgrades that they are forced to close their doors for good. For this viewer who has seen 35mm and DCP versions of many films, 35mm always wins out in the end even with all the scratches, dirt and audio pops. If that was the format it was originally presented in and if you want to preserve the experience of seeing the film as originally shown then it’s a format that should be maintained.   For example, the first time I saw Dr. Zhivago was on a DCP. I loved the movie but was a bit disappointed in the presentation. Later I had the opportunity to see it on 70mm. Wow! It was like night and day. Film wins.

Julia Marchese’s ode to the New Beverly Cinema, rep cinema and the 35mm format is an entertaining, nostalgic, informative documentary that does a fine job of encapsulating the importance of repertoire cinema and their ability to show films as originally intended. The appreciation of film and how and where they are exhibited should not be lost on account of a studio wanting to save a few bucks. Hopefully after watching Out of Print you may find yourself wanting to seek out a repertoire theater near you and if they still run 35mm consider it a win-win situation.