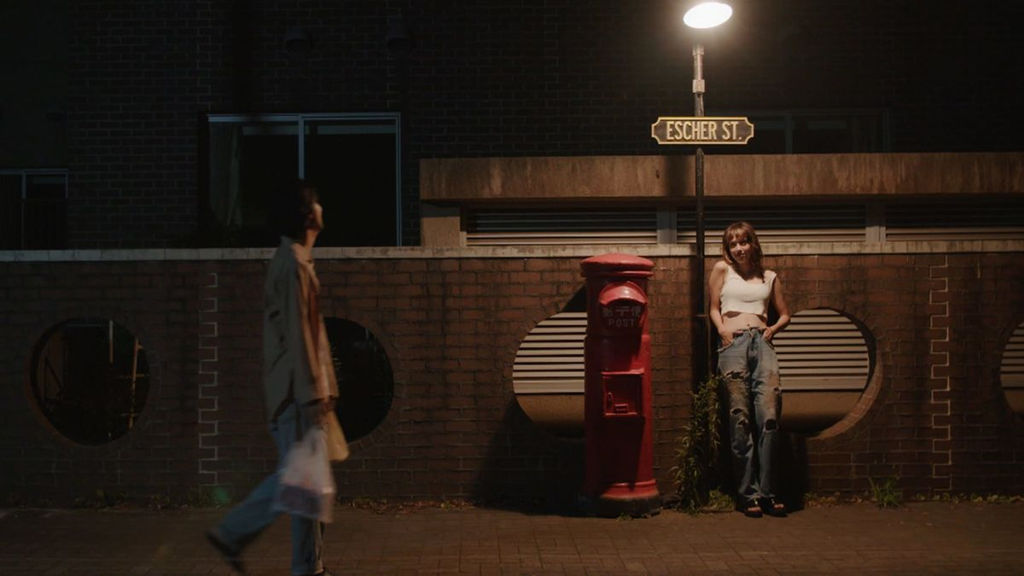 Sion Sono is one of those directors who is notable for a prolific output stemming from a tireless, debilitating work ethic — at one point releasing five separate and distinct features in 2015. It should not surprise any of us that, hot off the heels of the Sundance premiere of his English-language debut, Prisoners of the Ghostland, the cult director has yet another film that has begun its international rollout.

Seeing the writer-director continue his self-reflective exploration of cinematic artifice and the filmmaking process previously seen in 2016’s Antiporno and 2019’s The Forest of Love, Red Post on Escher Street emerges as his most accessible and grounded treatment of this specific theme to date. Featuring a large ensemble cast and a multifaceted narrative depicting the tumultuous production of an independent film helmed by an idealistic director, Sono’s latest is an ambitious meta tale of creative folly delivered at his signature levels of bombast and exaggeration.

Restlessly detailing the lives, desires, tragedies and ambitions of a cast of characters involved at different capacities in the production of an independent film (but mostly at the entry level of the lowly extra vying for screen time), Red Post’s daunting scale and many character arcs make it feel as though it is on the verge of breaking down into disarray at any time.

While mostly anchored to the quixotic wunderkind director Kobayashi (Tatsuhiro Yamaoka) and the struggle of power between him and his stringent producers, the film tosses a wide net around Kobayashi’s production and fills the cast with hopeful actors (most of them newcomers themselves), dedicated career extras, a Kobayashi fan club, a theater troupe of tattooed tough girls, Kobayashi’s crew, and so on. With the cast ballooning to a dozen or so characters — each with their own relationships and backstory that intersects, or more accurately collides, with the rest of the bloated cast — by the joyous chaos of the climax, the film would have felt like a mess in the hands of a lesser storyteller.

Under Sono’s direction, Red Post on Escher Street makes the multiple chapters of its 149-minute runtime feel brisk and pleasant as it probes into trials and tribulations of film production. Unlike other takes of this theme (even from Sono himself), Red Post emanates from a place of unbridled joy for the movie-making process, embracing the chaos of the unravelling thread that is Kobayashi’s passion project with warm empathy and unbridled humor.

Take for example the film‘s almost poetic fixation with the role of the extra, where most of the cast inevitably gets slotted into over the course of the film. Taking the form of a full-throated love letter to this underappreciated marginal component of the film set, described at one point by a veteran extra as “the onions” in the metaphorical burger that is a film, Red Post follows its cast of characters attempting to hijack Kobayashi’s film from the edges and preaches the sincere message of all roles being equally important using Sono’s trademark exaggerated register.

It’s worth pointing out the film, shot at a manic pace over 8 days, was the product of Sono mentoring an acting class of amateur thespians and a desire to give his students more experience. Like a bizarre “extra credit assignment” for undiscovered talent, it is unsurprising how elegiac his script can get on the subject of acting, how often his character are allotted long winded and full throated monologues, and how equitably his extensive runtime is divided among his characters. Luckily for us, his class of acting hopefuls was full of talent that could carve their way through Sono’s lofty dialogue and infamously demanding direction style and stand out in their own ways among the ensemble and several of Sono’s regulars.

What distinguishes Red Post from the directors other self-reflexive explorations of the cinematic process is not only its Robert Altman levels of narrative facets, but the absence of the director’s signature nihilism. Where previously in his career he depicted the pursuit of the filmmaker’s path as fraught with angst, cynicism and often ending in bloodshed, Red Post intoxicates you with its enthusiasm for the filmmaking process and ends with a genuine rally for creative expression, no matter how little screen time you get. Possibly due to him working with young impressionable actors, possibly a result of his brush with death that occurred before its production, at any rate the result is wondrously infectious, thought provoking, and one of the director’s best films in his storied career.