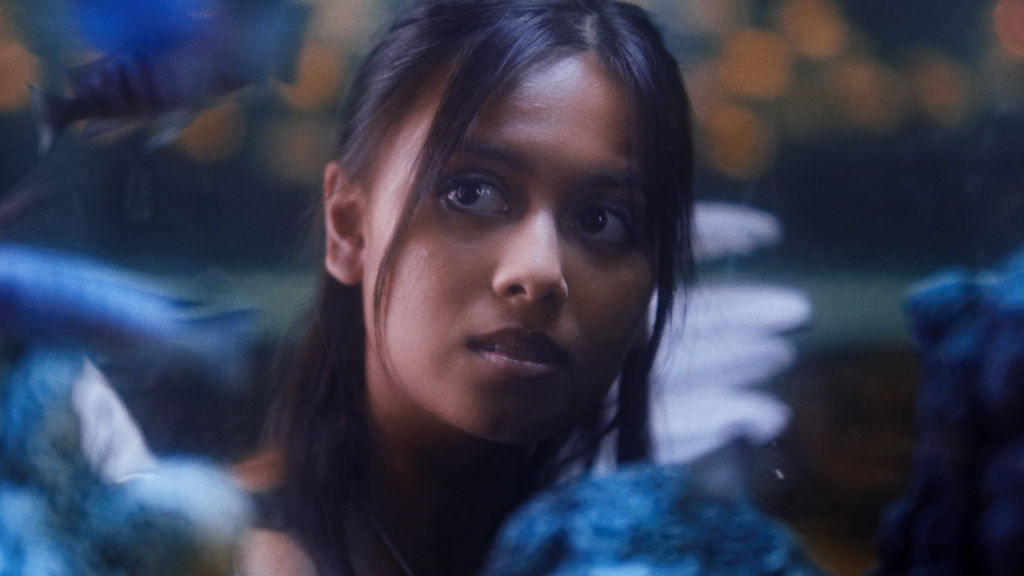 A signifier of an ill-conceived attempt at a feature-length film is the clear heavy lifting that an overly saturated soundtrack does to pad its runtime. Throughout Andrew C.’s mid-’90s period piece about the challenges of fitting in with diasporic identity for a Canadian youth, you are bombarded with period-appropriate, yet generic, generic pop-punk songs stretching out over moments where what little narrative there is seems to come to a halt.

It is not uncommon for a scene featuring our temperamental protagonist Pooja (Zaarin Bushra) to silently think over her latest backfired attempt to make waves in her predominantly white high school while the whining sounds of Lagwagon or New Found Glory squeal emotionally about not fitting in. I pause on these moments not only due to how heavily they weigh on the film’s brief runtime, but also because they represent the most notable aspect of White Elephant’s flat diaspora drama.

To be as kind of as possible, Andrew C.’s hour-long film feels more like a Very Special Episode of a Canadian television show for young adults that was poorly padded out to feature length. Set in Scarborough, it follows the outspoken Pooja and the attempts she makes to absorb the local Canadian culture and mask her otherness among her mostly white peers.

Joined with her comic-relief friends, Manpreet and Amit (Gurleen Singh and Dulmika Hapuarachchi), who regularly check her transparent shame over her Indian identity, the film bills itself as a “self-love story” in how it is ultimately about her learning to accept her identity as a second-generation Canadian. Yet, due to a lack of focus within its narrative, White Elephant cannot help but feel like a retread of this well represented (but still imperative) plot setup.

Pooja admires and emulates the “Western culture” in the form of Hollywood movies she regularly partakes in and irregularly has self-insert fantasies about, but outside of a base desire to fit in, her character is somewhat one-dimensional. The only acknowledgement of her struggles with her Indian heritage plays out through two brief scenes with her unnamed father (Kumar Kapasi) that have no lasting impact, due to how quickly they are brushed over for a more pressing storyline involving a local gangster (when the film awkwardly takes a turn toward harder material in its final 10 minutes).

Brushara and, by extension, much of the main cast prove themselves capable of handling a story centered on conflicts of identity, but the script can never focus on it for long. The uncomfortable television feel stems from the awkward episodic way subplots circulate around this narrative and how this could have been memorable if it had actually been divided among several episodes.

The aforementioned gangster subplot stems from Pooja’s racially charged rejection by a boy from another high school, and the sudden tonal shift this represents derails the film. Where before Pooja’s conflict stemmed from a relatable place of teenage angst, the introduction of the volatile Rohit (Yahya Amin) so late into the narrative clouds the nucleus of the drama with a tonally incongruous character who attempts to add graver stakes where they’re not needed.

Much like her arguments with her immigrant father, her frequent emulation of Western culture and the petty arguments she has with her friends, this plot is not resolved or followed up on within the brevity of White Elephant. The film doesn’t tie up its many insignificant plot threads, instead casually stopping in the midst of this severe tonal shift with a violent gangster on the loose, further bolstering my suspicion that this was a pilot of some type initially.

I try to be kind to a film such as this, which was clearly not in command of a significant budget given its production value. Diaspora is an ever-necessary and relatable story, and for a cast full of “discovered” talent, they show promise with the few scenes that allow them to work with the material.

The problems of White Elephant predominantly stem from its paltry script and its crippling lack of focus on a central, consistent story arc, and it brings nothing new to the table besides an intense focus on pop-punk with its overbearing soundtrack.