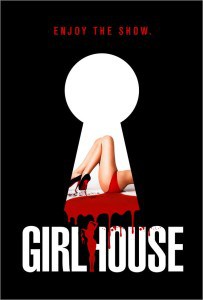 I’ll likely piss off some readers, especially horror fans, when I say the slasher genre has pretty much been dead for the last two decades. It has been one of the weakest and most under-utilized subgenres of horror film lore, and looking back, it’s been nothing more than remakes, sequels to remakes and cookie-cutter, cliché-riddled schlock.

Not counting the aforementioned categories, when was the last time we saw an original slasher film hit the silver screen? I don’t mean “original” by definition, certainly not being based on previously existing material is a start, but one that presents the conventions in an original and entertaining way. Wrong Turn? See No Evil? Hatchet? Nah, didn’t care for any of them. For this viewer, you’d have to go as far back as 1996, the year Wes Craven gave us Scream. Now it’s 2014 and a new film has come to pick up the mantle. Trevor Matthews’ feature directorial debut, Girlhouse, is a slasher film for the 21st century with 1980s sensibilities.

Kylie Atkins (Ali Cobrin), a young and beautiful college student in need of money to pay for tuition decides to move into a house that streams live content for a popular X-rated website. The women can come and go as they please but live at the house and play for the cameras, which are everywhere. She starts to adjust to her new life with fellow housemates Janet (Chasty Ballesteros), Devon (Alyson Bath), Mia (Nicole Fox), Kat (Alice Hunter) and Heather (Elysia Rotaru), and all seems to be going well. The stream, Girlhouse, has a diverse audience – teenagers, businessmen, shop owners, locals, foreigners and, unbeknownst to the women and operators of Girlhouse, one very disturbed, creepily obsessive admirer named Loverboy.

Slasher films used to be a dime a dozen, and the vast majority of them were forgettable. The ones that stood out always had four things in common – a memorable killer; likable characters; an engaging, well told story; and the creators had fun with the story. I concede that many slasher fans will point out that, in the last few years, there have been numerous films that met this criteria, but for this particular horror fan (who grew up with Michael Myers, Jason Voorhees and Freddy Krueger), the genre has been stagnant.

Nick Gordon, in his feature writing debut, has written a solid throwback to ’80s slasher films but updated it to be more modern. The script features a memorable killer with a backstory, many believable and likable characters and an engaging story. Matthews embraced Gordon’s approach to imbue the film with an old-school structure that emphasized developing the characters before the carnage. Like the classic Halloween, it’s not until the third act when all hell breaks loose and the film is all the better for it. The third act in this film is a doozy.

The film features many memorable performances with Slaine, who you may remember as “Bubba” in Ben Affleck’s Gone Baby Gone and who stands out thanks to his incredibly creepy portrayal of Loverboy. It may ruin the mystique of the character but Slaine was the face of Loverboy and stunt people play the man behind the mask but collectively Loverboy is a force to be reckoned with. Ali Cobrin is very good as our heroine Kylie; she’s instantly likable, believable, smart and resourceful. Her fellow co-stars in the house are all quite good as well. While their characters may be deemed stereotypical, they do put their own stamp on their respective parts, and each one has a memorable moment. Not to be outdone, there are people outside the house. James Thomas is fine as Gary, the man behind the house. Adam DiMarco and Wesley MacInnes are great as well as a pair of Girlhouse viewers.

This film can certainly be viewed as gratuitous and misogynistic. But relatively speaking, the sex scenes, which are few and far between, are neither gratuitous nor titillating, and while the women are the object of one person’s unwanted affections, they aren’t the type to play the victim. The film features a solid killer who seems very real and who is not your typical stalker. This boy can run, and that makes him all the scarier. If you’re a slasher movie fan, seek out Girlhouse because it’ll remind you of just how good slasher films use to be and give you hope knowing there are filmmakers out there who know how to do them properly.