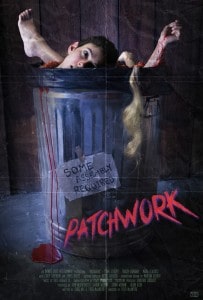 Re-Animator, Frankenhooker and The Bride of Frankenstein are films whose stories were inspired by classic pieces of literature – each film being notable, or infamous, for its time. Now comes what can be best described as “Re-Animator for the 21st century.” It’s Tyler MacIntyre’s Patchwork, featuring Tory Stopler and Corey Sorenson.

Three young women who have never met find themselves struggling to piece together the events of the previous night when they awaken to discover that not only can they not remember what happened but they horrifyingly find themselves inhabiting one body.

Yes you did read that correctly. Three women inhabit one single body. That’s the basic premise of this highly entertaining, well-directed, -edited and -performed horror-comedy that features some great pitch-black gallows humor throughout. Going into specifics would be too much of a spoiler, so that’s all you’ll read about the film’s witty story from me.

MacIntyre and Chris Lee Hill’s script is a clear homage to not just Frankenstein but to Stuart Gordon’s Re-Animator as well. Many will certainly recognize elements from those films, but it definitely doesn’t feel like a rip-off. This was clearly written as an ode to joy – the joy being the blood, guts and laughs that cinema can provide. 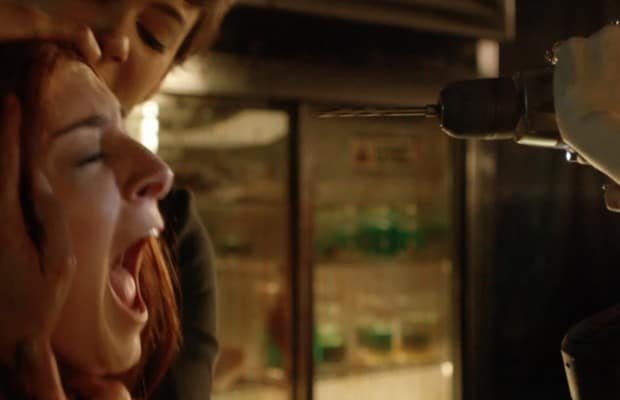 The film features many great set pieces and a very entertaining structure that not only intrigues but makes sure you’re paying attention. Unfolding in parts as the film progresses, each segment reveals a new piece of the puzzle, and chances are you will never guess just what the endgame will be.

The film also features many great one-liners that had my film’s audience in stitches. MacIntyre does a fine job of not only directing but editing the insanity into one of the few genre films that near perfectly blends the horror and comedy genres together. Patchwork is played perfectly straight and never once show’s its hand, breaks the fourth wall or gives a wink to the audience.

Starring as the film’s heroic trio are Tory Stopler, Tracey Fairaway and Maria Blasucci. Each character is very different from the other, which easily amps up the comedic factor as situations unfold. All three actresses are very good in the film. Fairaway hilariously plays the dumb blonde; Blasucci is convincing and sympathetic as the wall flower; and Stopler is quite amusing as the self-centered, career girl.

However, when all is said and done, this film belongs to Stopler; her performance elevates the film. Stopler also plays Stitch, the equivalent of a Frankenstein’s monster in this film’s. Her performance will likely remind one of Steve Martin from All of Me and Patty Mullen from Frankenhooker (decidedly more the former than the latter). Stopler is incredibly convincing, and her performance is both mental and physical. You buy into the conceit that there are three women in there, and Stopler’s comedic timing and acting amounts to one of the best performances we’ve seen in the genre for some time.

Patchwork is a highly entertaining, funny, twisted and original take on the classic Frankenstein mythos. It features fine performances, solid directing and great use of practical make-up effects; one piece nearly stole the entire film. MacIntyre’s film is very much Re-Animator for a new generation of genre fans. It’s not as good as that horror classic – not many genre films can or ever will be – but it certainly deserves to be recognized as one of the best genre films of the year, and in time it will likely become a cult classic like the ones to which it lovingly pays homage.