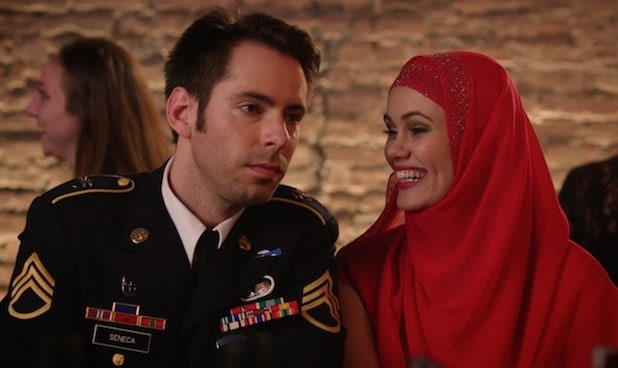 Normally, when I hear about the next romantic comedy I have very little interest to actually see that film, but Sean Mullin‘s upcoming Amira & Sam has peaked my interest. The film stars Martin Starr as an Army vet looking to reconnect with the man who was his translator overseas and ends up falling for his daughter, played by Dina Shihabi.

Drafthouse Films is releasing Amira & Sam January 30th, 2015 in theaters and on VOD.

Rousing, smart, and sweet, Amira & Sam is a confident feature debut from writer-director Sean Mullin, and follows Sam (Martin Starr, “Freaks & Geeks”, “Silicon Valley”), an army veteran adapting back to civilian life after a lengthy tour overseas. Upon reuniting with his unit’s former Iraqi translator in New York City, he meets Amira (newcomer Dina Shihabi), his war buddy’s niece; suspicious of soldiers, she wants nothing to do with him. However, when Amira runs into immigration trouble, Sam offers to keep her safe at his apartment. After a rocky start, their unlikely friendship starts to blossom into something more.

Meanwhile, Sam’s cousin Charlie (Paul Wesley, Before I Disappear, “The Vampire Diaries”) offers him a lucrative opportunity at his hedge fund, helping to secure wealthy veterans as new clients. However, all is not as it seems, and Amira and Sam soon find themselves faced with mounting obstacles in order to stay together.