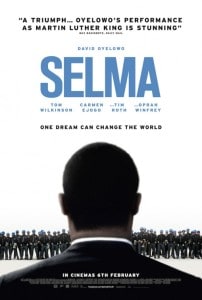 It’s the mid-1960s. Racial intolerance and discrimination still permeate many parts of the country and possibly none more so than in the state of Alabama. While every man and woman of age is granted the right to vote by the Constitution, black citizens are denied the right due to excessively strict criteria that pretty much prevent them from registering. Rev. Dr. Martin Luther King, Jr. (David Oyelowo), a recent winner of the Nobel Peace prize, cannot stand idly by as this injustice unfolds.

Having already put a plan in motion, King heads to the White House to implore President Lyndon B. Johnson to take action. After meeting with President Johnson (Tom Wilkinson) and learning there will not be any aid coming from the White House, at least for the time being, King knows what must be done. The march from Selma to Montgomery must begin.

I have to admit that, after I read Oprah Winfrey was involved, thoughts of the poorly executed Lee Daniels’ The Butler came to mind. That film had the opportunity to present something special but instead became a heavy-handed social lesson. Thankfully, my fears were allayed, as this is a very reverent docudrama that seems to stick to the facts, never gets maudlin and is never heavy-handed.

The film is not trying to shove a social history lesson down your throat but is simply presenting history to the viewer and all the social commentary that is inherent within it.   Written by Paul Webb and directed by Ava DuVernay, this film is very much like Steven Spielberg’s Lincoln, where instead of being a biopic, it only looks at a specific period in that person’s life. Again, like Lincoln, this film focuses on a significant moment in African-American history, the Selma march, and the passing of the Voting Rights Act.

Besides the man himself, perhaps the one thing that will be most remembered from this film are the performances. David Oyelowo gives a masterful, affecting and nomination-worthy performance as Rev. Dr. Martin Luther King, Jr. You begin to understand the man’s motivations, the weight on his shoulders, and his desire to see justice served. Perhaps the most memorable and potent moment in the film is a scene where King attempts to console a grieving father at the county morgue. The scene encapsulates the sobering tragedy of that dark period in American history and is driven home by Oyelowo and Henry G. Sanders (as Cager Lee) through heartbreaking performances.

Carmen Ejogo is also very strong as Coretta Scott King. She comes off as a woman who supports her husband and understands the trappings and pressure that he is under, even when it comes to questions of infidelity. Much like Lee Daniels’ The Butler, this film features an all-star cast, but these actors are much better utilized. Giovanni Ribisi, Dylan Baker, Common, Martin Sheen, Cuba Gooding, Jr., Tim Roth and Tom Wilkinson are just some of the more well known and talented actors who make up this ensemble.

DuVernay does a great job of recreating the period and the events of the time. Her recreation of the bombing that took the lives of four young schoolgirls is jarring and shocking. She is unflinching in her presentation of the brutal beatings that citizens endured at the hands of the police and average citizens. I was disappointed that the film builds up to the march but only commits maybe 10 minutes of screen time to the several-day-long event. We see actual footage mixed with recreated footage to show the march, but it would have been great to actually spend time in it. Perhaps the filmmakers felt the film was running long (it runs 127 minutes), but it could have gone on a little longer. Another quibble, albeit minor, would be the use of a tried-and-true plot device where on-screen text is used to represent FBI memoranda as they are sent out. The device is a bit redundant, as it is pretty well understood that the FBI had them under surveillance, and the info only underscores what the viewer just witnessed.

Selma is a film that is not only relevant for its presentation of history but also for how it ties into 21st-century America. It successfully encapsulates the events that led to the historic signing of the Voting Rights Act and the sacrifices that were made to get there.   The film is well directed and written and features many stellar performances. Every year there always seems to be that one film that comes out of nowhere and becomes the dark horse in awards season. Selma could be that film, but in all actuality it’s not a dark horse but a legitimate contender.