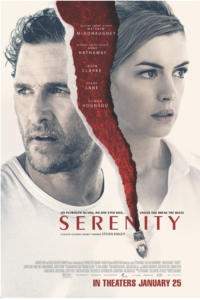 There’s really no other way to start than by stating that the new neo-noir thriller Serenity is a joke. Only, not just in the way that you would initially think by my saying that. Yes, Serenity is a bad film. In fact, it might even end up as one of the worst films that arrives in theaters this year. It’s disfigured with all the common symptoms of a movie not worth the price of admission: regurgitated genre cliches, painful overacting, heavy-handed exposition, cartoon-character villains, extensive tonal inconsistencies and utter predictability.

It could be justifiably substantiated that based solely on this evidence alone that the film be deemed so ludicrously inadequate as to be called a joke. But it is not only the film’s ostensible poor quality that defines it as such; instead, quite literally the movie is, in of itself, an elaborate practical joke: an hour and forty-five minute-long bate and switch pulled on unsuspecting moviegoers intentionally woven to be so by the thoroughly misguided and shortsighted writer/director Steven Knight (Locke, Peaky Blinders.)

Our story gravitates around a character played by Matthew McConaughey (Dallas Buyers Club, Interstellar) who excels at doing Matthew McConaughey things: Baker Dill is the kind of guy that “takes showers” by diving off the seaside precipice in the nude and spends his days soaking in the sun, chain-smoking on his boat catching fish, talking to himself and drinking rum. At its lowest points, the film honestly feels to be nothing if not an excuse for McConaughey to parade around like a pirate, bedding multiple women, walking around shirtless and talking cool and smooth like only Matthew McConaughey can. But despite the given indication, Serenity is not the next installment in the Pirates of the Caribbean series, unfortunately for audience members. 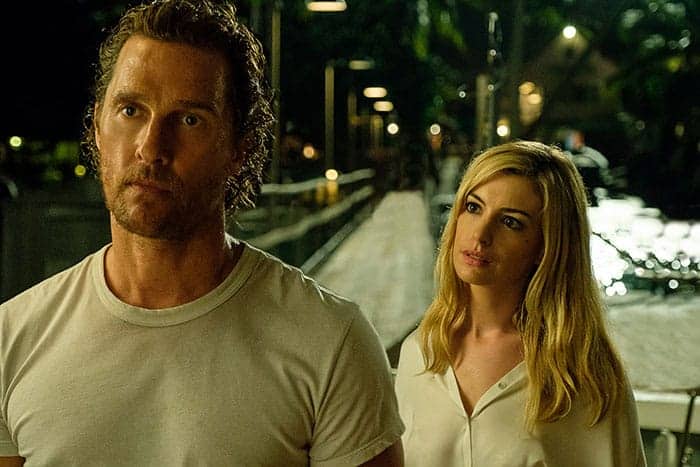 Baker is an ex-military man who engages in all the aforementioned activities with a jaded chip on his shoulder, somewhat psychologically broken by his past that has reduced him to the role of Captain Ahab as he spends all his days in the pursuit of reeling in a monster tuna whom he has dubbed ‘Justice.’ The townsfolk of Plymouth Island are growing steadily weary of his peculiar disposition and loosening grip on reality, as he scrapes by through conning customers into fishing tours to the open ocean merely for his own chance at catching the big fish, sometimes even threatening them at knifepoint if they stand between him and his ultimate prize.

The film’s trajectory begins to become painfully transparent (or so you would think) when McConaughey, er, I mean Dill, is visited, out of the blue, by his opulent ex-wife played by a breathy and exhausting Anne Hathaway (Les Miserables, also Interstellar). Somehow she has managed to pinpoint the location of her castaway ex in the middle of nowhere, and is now seeking his help to save her from the abusive clutches of her new hubby (Jason Clarke in the role that sets the new standard for purely one-note, staggeringly caricatured performance of toxic masculinity) who will soon also be arriving to further disrupt Dill’s tropical and tranquil island community existence.

And when Karen (Hathaway) hastily offers Dill the completely reasonable sum of 10 million dollars for his assisting in the murder of said bad guy — before we even know where this impossible amount of cash is coming from — he will have to choose between his quest for metaphorical redemption involving the remorseful memories of a long-gone son by way of snaring a certain tuna, or taking up his ex-turned-femme-fatale on her lucrative but ethically compromising proposition and maybe learn somewhere along the way how the two options might end up being one and the same.

Now you might be thinking, “This is a movie with two academy-award winning actors in McConaughy and Hathaway in it, why haven’t I heard about this?” The answer lies somewhere within what begins to unravel next, in a reveal so simultaneously humorous and humiliating that there might be no feasible way to promote this without being accused of false advertising. The neo-noir genre content is cheesy enough here, with these decorated thespians crashing and burning in tedious, horribly written and ineptly composed sequences, where supposed dramatic moments unintentionally devolve into pathetic, woeful comedy. And this is all taking place even before the flabbergastingly asinine ‘twist’ that occurs halfway through the runtime, taking a film that is already barely on one leg, flipping it on its head and pushing it down a hill. 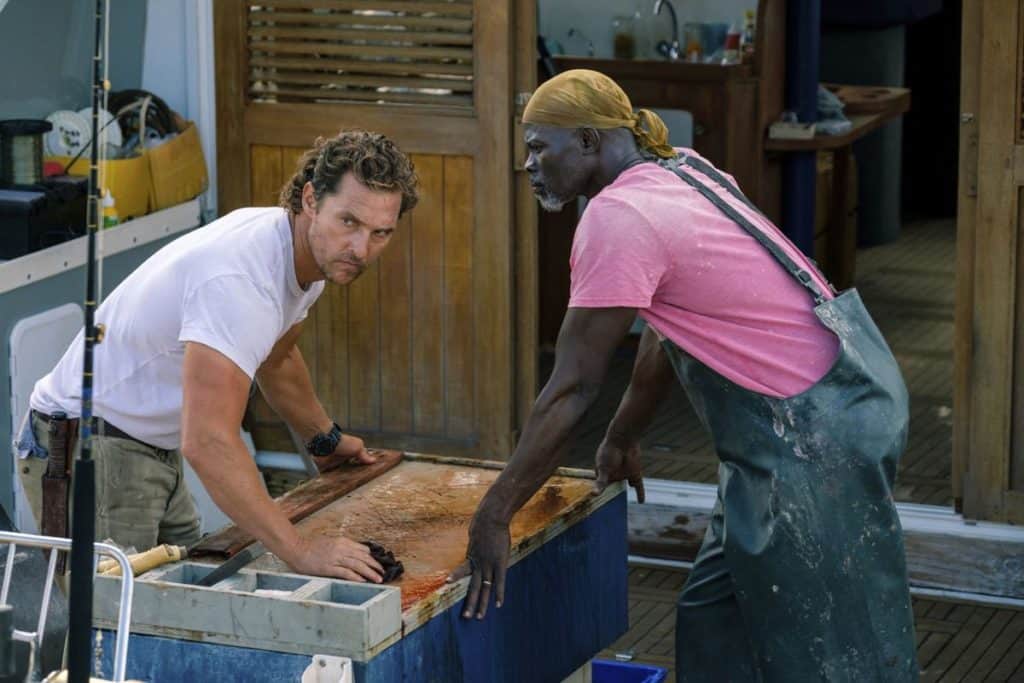 There’s an eerie awareness throughout that everyone around McConaughey has all the answers except him — even the audience. When the script plants its flag and announces that this is now a completely different film than anyone here signed up for, it makes the critical error of failing to realize that the game has been given away from the onset by vague and tonally-confusing supporting characters that have an evident and uncanny understanding of things that have yet to happen in the story, thereby gift-wrapping the reveal to anyone with a smidge of sense long before the twist ever even occurs, no matter how disorienting and unpredictable it might actually be when it hits. This renders an already bad film into a downright inconsequential one, with the worst part being the recognition that there’s still half of a movie left to sit through.

What follows is as surreal and shockingly poor of a product that you can get with the collective talent involved in creating it. Ultimately a hackneyed commentary on existentialism, human programming, predestination, martyrdom and spiritualism, it becomes clear why the two Interstellar stars might have mistakenly believed in this mess at one point in time. But what we’re regrettably left with is a film so lost in its backwards and bonkers premise that it commits fully to its supposed genius, stranding moviegoers defenseless in their seats to bear witness to the fiery trainwreck taking place in front of them. It must be all up from here for 2019, because you can’t get much lower than this.