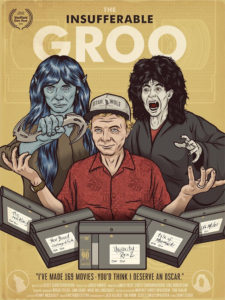 Stephen Groo may not be a filmmaker you’ve heard of, but the man has created more than 200 films over the last two decades, a number that continues to rise on a seemingly month-to-month basis. With his filmmaking obsession taking over his entire life, sometimes at the expense of being a provider for this loved ones, Mr. Groo will stop at nothing to become an accomplished director/producer/editor/actor.

Over the years his films caught the eye of a few high-profile people in the industry, namely director Jared Hess, who would frequently buy and give out Groo’s films as presents to cast and crew on his projects and even used some of Groo’s ideas in his film Gentlemen Broncos. Hess produced this documentary, titled The Insufferable Groo, which follows Stephen on his journey to remake one of his most ambitious films, Unexpected Race.

Directed by Scott Christopherson, the film profiles Groo in an unflinchingly frank manner. It highlights his passion for film while exposing his narcissism when it comes to his duties as a filmmaker. In one instance he’s represented as a stubborn monster, demanding the world of his crew while forcing them to work 18-hour days with no pay, and in another it humanizes him, sharing an intimate moment with his wife in a hotel pool.

Films such as this tend to blur the lines of human interest and exploitation, similar to American Movie and Kung Fu Elliot, and the filmmakers seem to be cognizant of this, even going so far as having Jared Hess speak about it in the film. Everyone involved in the documentary seems genuine and supportive, wanting to see Groo succeed in his endeavors, though he frequently proves to be his own worst enemy.

He films at a breakneck pace, rarely moving past one or two takes, which sometimes cause continuity problems in editing. He seems reluctant to bring in outside crew members to help him make decisions, and when he does the combination of his tyrannical directing style and refusal to listen to suggestions pushes them away. It’s hard not to think about what kind of movie this man would make if he had the right budget, the right time frame and the right producer to keep him reined in. But then again, it’s his fast-and-loose style that initially garnered the interest of people like Hess and Jack Black, who agreed to play a role in his Unexpected Race remake.

The documentary is accentuated with 8-bit-style animated intros for many of the subjects interviewed, but it also features some very well done hand-drawn cartoons as well, giving the film an inconsistent, but aesthetically pleasing look.

Groo is an interesting subject to be sure but not a particularly likable one, though the documentary presents information very matter-of-factly and lets you draw your own opinions of the man. He’s passionate and driven but to a fault. His family is living off the $1,000 a month his wife makes, and they need to support their three children. It’s hard to root for a guy to succeed when he doesn’t give you any good reason. Still, Groo’s dedication to filmmaking is admirable, and Christopherson presents that in a well-crafted documentary that’s an easily recommended watch.

GUNPOWDER MILKSHAKE Gets a New Trailer