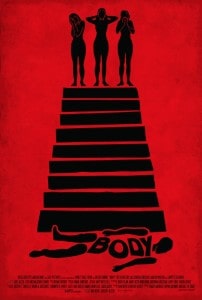 What would you do if you accidentally killed someone while hanging out in a house that you weren’t exactly supposed to be in? Most rational people would immediately call the police and tell the truth. But if you’re one of the three friends in Dan Berk and Robert Olsen’s Body, however, you’re going to do pretty much anything but that.

This short-but-compelling thriller stars Helen Rogers, Alexandra Turshen and Lauren Molina as three best friends who decide to go out for a night on the town on Christmas Eve. Turshen’s character, Cali, recommends that the three go hang out at her uncle’s mansion, which has been left unoccupied for the holidays. After the obligatory party montage, we discover that Cali was not only lying about whose house it is, but also that the girls aren’t alone in the house.

I don’t think it’s a spoiler to say that, due to an unfortunate accident, the girls cause grave injury to a man in the house, played by horror legend Larry Fessenden. Now they must decide what to do with this man and how to proceed with getting out of this situation.

Body is a frustrating movie. It’s the type of movie that leaves you yelling at the screen for nearly the entire 75-minute runtime, as if these girls are going to somehow hear your words and not be idiots. In the back of your mind though, you’ll know that they’re going to do the exact opposite of what you’re telling them and end up digging themselves in a deeper hole.

There are components of this plot that we’ve seen numerous times before in cinema, but that doesn’t make Body any less entertaining. All three young actresses give solid performances, even though they are not the smartest or the most likable bunch. There are some twists, both predictable and not so predictable, that keep things moving and attempt to take the story in a different direction. These all work for the most part but do little to elevate the narrative into something more than what you would expect.

Body is a well-made thriller for what it is, which, as it turns out, isn’t much. It’s one of those movies that comes in, does its job and then gets out without padding itself with needless character development and buildup. The brisk runtime keeps things moving, and it doesn’t overstay its welcome. However there’s just not that much going on here.