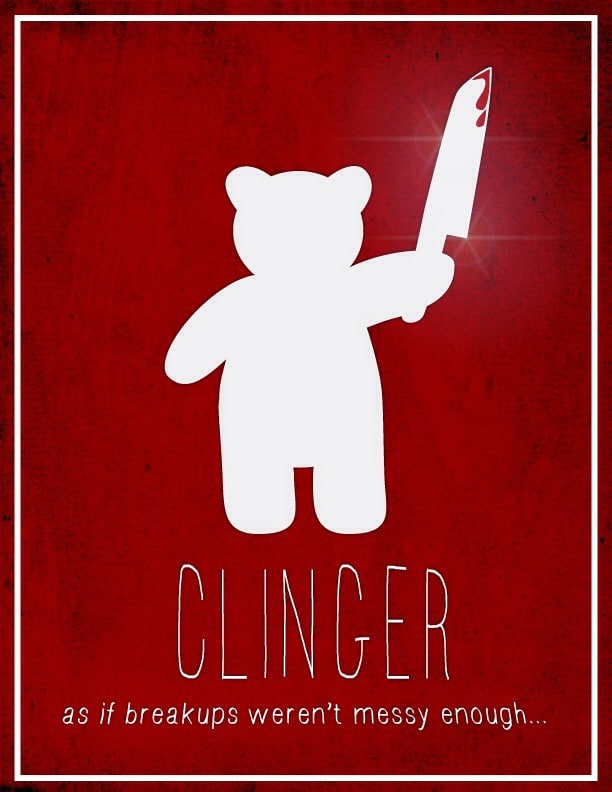 Falling in love for the first time can be a beautiful, exciting, and scary thing. To suddenly care so much for another person that you can’t bear the thought of being apart is an overwhelming emotion. While expressing your love and devotion to your significant other is a good thing, sometimes partners can feel smothered, especially when in a new relationship. Michael Steves’ horror-comedy Clinger explores the most extreme version of this concept and achieves varying degrees of success.

The film begins with a budding romance, with Robert (Vincent Martella) meeting Fern (Jennifer Laporte) after Fern falls down while practicing for a big track meet and Robert rushing to see if she’s okay. The two go on a date and hit it off pretty quickly, but as the weeks turn to months, Fern begins to resent Robert for his never-ending romantic gestures and ridiculous gift-giving. On the night Fern was planning to break up with him, a horrific accident involving one of these said gestures renders Robert headless. While Fern was saddened by his death, she begins to move on with her life, focusing on her studies and trying to get into MIT. But Robert’s ghost comes back and has other plans.

Playing out like something of a teen romance spoof, Clinger attempts to provide a lot of laughs but only sometimes hits the mark. Many of the performances are over-acted and the murky tone of the film never lets the viewer know if the movie is making fun of itself or not. Most of the minor characters play caricatures of themselves, from the Reagan-loving conservative dad and the hippy-liberal mom to the sassy track coach who has a side-business as a paranormal investigator. Of all the people in Fern and Robert’s lives, the only person who really nails it is the sister, played by Julia Aks. Her comedic delivery is on point, and she provides the most laughs throughout the film.

Things get interesting when Robert’s ghost decides that the only way he and Fern can be together is if he kills her, turning her into a ghost as well. This results in an all out war between the living and dead, making the story much more grandiose than just a girl trying to dump her ghost boyfriend.

The ghost mechanics in Clinger are inconsistent at best and seem to be at the mercy of the plot for the majority of the film. At first, Robert seems like a normal poltergeist, being able to interact with objects around him like when he terrorizes a boy that Fern may or may not be interested in. But then he’s somehow able to bring life to teddy bears, turning them into demonic killing machines. None of this necessarily brings the movie down, as it never attempts to be grounded in reality. I mean, we are dealing with ghosts here, but it’s best not to think about how these things happen.

Clinger is a light, entertaining, and extremely bloody take on the idea of teen love, a topic that in and of itself is a complete horror show for the most part. The script is well written, and although it gets a bit too goofy at times, much of the dialogue is smart and funny. The film also acts as a cautionary tale, warning those who jump head first into a new relationship just may end up losing it.