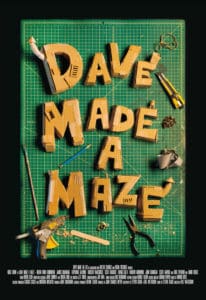 This is a repost of our review from Slamdance 2017. Dave Made a Maze will be available this Friday in theaters and on VOD platforms.

As the title of Bill Waterson’s comedy Dave Made a Maze suggests, Dave does indeed make a maze — and what a maze it is. Exploding with creativity, this quirky film about a slacker who creates a cardboard labyrinth in his apartment and subsequently gets himself and his friends lost inside is a ridiculously fun and absurd romp that had me chomping at the bit to uncover each and every unique room and passageway.

As we discover during a great animated opening titles sequence, Dave (Nick Thune) has a creative mind but can’t seem to direct that creativity into anything of substance. Held up in his apartment, struggling to find his muse, and dabbling in every artform from music to origami, the idea suddenly hits him to create a labyrinth that acts as a representation of himself — his frustrations, his fears and his desires — and after entering the maze, he finds that he’s essentially trapped in his own mind.

After his girlfriend, Annie (Meera Rohit Kumbhani), comes home from a trip and discovers that not only is there a maze filling their living room, but her boyfriend claims he’s lost in said maze, she enlists the help of their friends to figure out a way to get him out. After a short time of deliberation, they decide to go in after him but find themselves in a seemingly neverending labyrinth of cardboard and construction paper.

As was most certainly intended, the maze steals the show in Dave Made a Maze and instantly makes the film worth watching just to see how impressive and intricately crafted the production design is. Each room and corridor has its own unique flavor; some contain living paper creatures while others are lain out in awesome-looking optical illusions. 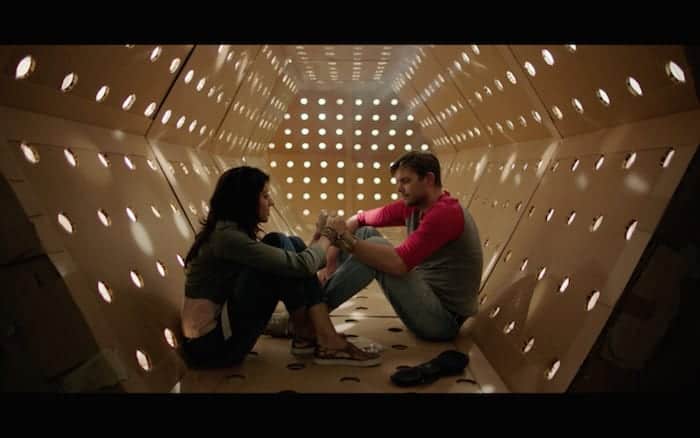 As the group makes their way through the labyrinth, it quickly becomes apparent that there are some very real dangers to contend with, not the least of which is a paper-headed minotaur that’s hunting them. Various traps are scattered throughout the maze, and when someone happens to spring one, that person’s unfortunate demise is punctuated with ribbon and confetti blood, adding to the illogical and absurd place in which the characters have found themselves. They are as clueless about the rules of this place as we are, which results in some very funny banter between the solid cast.

The only element of the film that doesn’t necessarily work is the throughline of Dave’s relationship with Annie and him finding the motivation to get off his ass and do something with his life. Dave did little to earn the hero role that’s bestowed upon him, and it’s difficult to sympathize with a guy who loafs around the apartment making mazes out of old pizza boxes while his girlfriend is out working a real job. This proves to only be a minor quibble, however, in an otherwise highly enjoyable adventure.

Dave certainly did make a maze, and it cannot be stated enough what a fantastic maze it is. The enormous creative flourishes and absurd comedy easily make up for its few shortcomings.