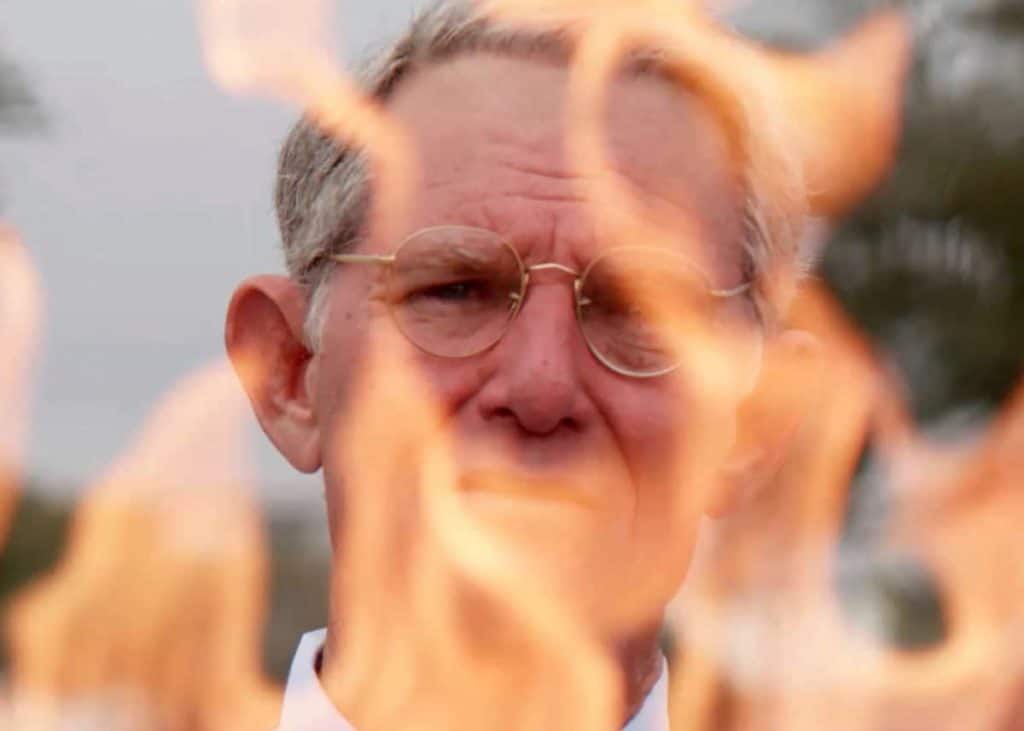 Interrogating a place’s hateful past can be a challenging endeavor when those who inhabit that space treat a present hatefulness as if it were antiquity. Imbued into the small town folksiness of Grand Saline, the municipality that Joel Fendelman points his inquisitive lens toward in the documentary Man on Fire, is an abundantly apparent racial tension that was never properly addressed and has been masked and accounted for with half-hearted “that was all in the past” rhetoric.

The subjects whom Fendelman gives a platform hail from Grand Saline and are southern-throwback types who spout soft racism and absolving ignorance when forced to confront the titular Man on Fire, Charles Moore, a member of the clergy who martyred himself to atone for the town’s history of civil rights injustices through self-immolation.

In the manner through which he is so keen to profile the unconscionable members of Grand Saline to determine how Moore’s dramatic statement fits into the town’s history, Man on Fire plays somewhat like the cinematic equivalent of those Mother Beast “Dapper White Nationalist” articles that put a pleasing spin on uncomfortable people.

Fendelman’s film is more or less his way of honoring Moore’s wishes that were outlined in his suicide note back in 2014. He wrote, “what my hometown needs to do is open its hearts and its doors to black people, as a sign of the rejection of past sins” in a statement left under the windshield of his car before dousing himself in gasoline and setting himself ablaze to “join by giving my body to be burned, with love in my heart not only for them but also for the perpetrators of such horror.”

Man on Fire presents Moore as a man of intense, detrimental empathy when it shifts the focus away from its racially insensitive subjects to profile him. What little we learn of this self-imposed martyr of racial injustice is filtered through the disparate subjects that Fendelman corrals together, whom, mostly being white citizens who still proudly call Grand Saline their home, refuse to engage with the political motivations of the act. Unintentional or not, Man of Fire in these moments catalogs the failure of Moore’s grand gesture of condemnation to achieve its purpose.

Yet, this is also what saves the film and could have elevated it to much more prescient levels if it followed through with this skew. There are moments in the film when Fendelman interviews black residents of a neighboring town lacking the overy hateful history of Grand Saline, and their nonplussed, sobering perspective offsets the other interview subjects beautifully. Shamefully these interviews are sparse, and Fendelman only pays lip service to the black perspective on Moore’s act, what with his interviewees being predominantly white, instead of engaging it further.

You can only devote so much time to a racist’s point of view before the repetition of ignorance becomes tiresome. If Moore’s sacrifice was an act of solidarity toward the historically victimized black community, I would want to know what that community’s reaction was much, much more than I would care what an elderly sheriff who wants to sweep history under the rug or a newspaper columnist who proclaims “we had a black president so we got there” has to say.

For such a bold, passionate protest as Moore’s was when he imitated Thich Quang Duc’s infamous protest, Fendelman is surreptitiously restrained in his shooting style. Assessing the bizarre event in question, he remains a winsome director as he takes a gliding slow-motion camera through the streets of Grand Saline and through its establishments. It’s a light poetic approach that, while aesthetically digestible, lacks the confrontational edge I was dying for from the subject in question.

Handling such radical material with such nonchalance calls into question what exactly Fendelman’s intentions were initially. I put it forth that he was attempting to interrogate the town’s history of racial discretions, but as a director he cannot properly wield his film to accomplish this goal.

What Man on Fire was desperate for was an end goal to its gauging of the political climate of Grand Saline three years after the event in question. With his camera at hand and a burning human to point it on, the most the film gets out of its subjects is an ill-advised, one-sided conversation where black residents and “woke” allies point to clear-cut racism and the folksy residents shrug their shoulders and deflect. It’s a cyclical exchange around the idea of Charles Moore’s immolation that rarely gets traction and makes one man’s sacrifice into scattershot inquisition.