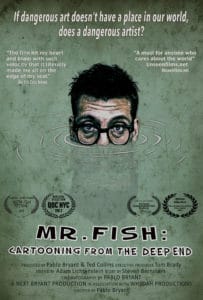 As a child Mr. Fish strove for liberation. That liberation came in the form of writing obscene words on paper airplanes and throwing them out the window. He would then be ushered into a court of law, where he would ask: why are these words bad? In essence, this became the structuring logic of his career as a cartoonist, and, oh, did the obscene words ever continue.

Formally, this documentary uses the transformative power of animation—that is the power to shapeshift from one thing to another—avoiding robust slideshow techniques to show of Mr. Fish’s cartoons. While Mr. Fish’s illustrations themselves try to rupture dominant culture, whether or not these aims hit is a different question entirely. His work deals with politics, US militarism and capital, most frequently seeking to close the gap between the stories we are told—that the war in Iraq is necessary—and the reality…the deaths of children.

The film is both a meditation on the life of the artist, in an ontological sense and the life of his artwork. Fish, as narrator, says that he wanted to be Angela Davis when he grew up because she was threatening. Although this revolutionary impulse is present, Fish’s desire for complex criticism moves beyond this into redundant simplicity. 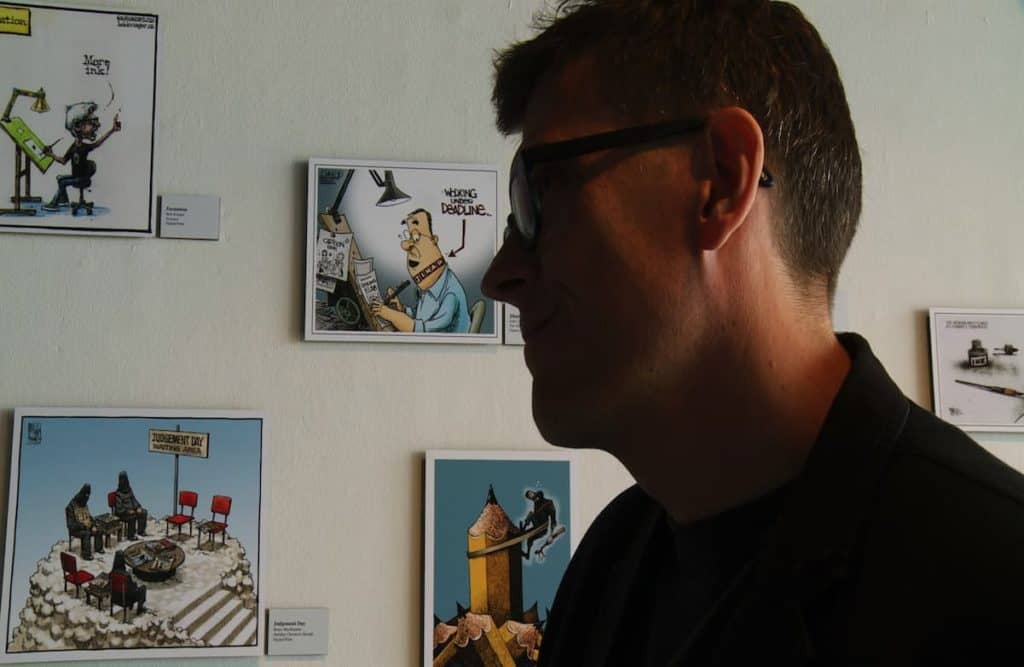 My stating this will no doubt be taken as my missing the point, however, with a politic that is meant to be informed by revolutionary feminist and black thought, my expectation was criticism without spectacle. What results though is criticism moving into spectacle which shocks—and offends—but does not prompt nuanced thought.

Fish eventually goes on to reject his ontological story at the film’s beginning, replacing it instead with the narrative of “I just fell into political cartooning.” One important critique that the film does make comes through a gallery owner who previously represented Fish’s work. What he says is that Fish doesn’t recognize the audience, so his work doesn’t sell.

The film narrates an all too familiar story. A masturbatory look at the life of a straight white man who wasn’t loved as a child or told his artwork was good. The film aims to create sympathy for the artist and the work but instead makes the artist and his work crude in a way that is not intentional.

Fish’s thesis dictates that if you don’t “look” at something then you can’t “see” it, which is to say that, if you don’t confront the disgusting truths of the world—wrongful incarceration, genocide and war, then you cannot understand that it’s real. 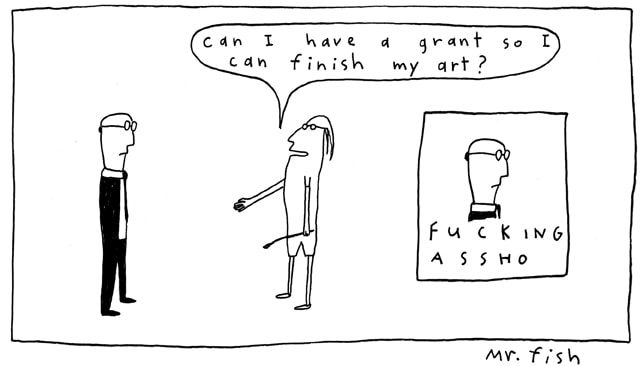 This is an extremely privileged, masculine view. Many people in the world are aware of the realness of horrifying events without having to lay their two eyes on it because their two eyes have always been confronted with horrors.

This is the fatal flaw of the film’s sympathy towards its subject; all the criticisms about the world Fish is making are correct, but in making them punchlines, what he does is make them unreal again. His daughter can tell you that the United States “sucks” and kills people, but she does so with a smile on her face and a giggle in her voice.

This is a major theme of the film: most if not all the praising, talking heads come from white men. There is criticism of uniform thought in a room wherein everyone looks the same. At about the 35-minute mark, I had to will myself to continue my watching because I kept thinking about just how much I hated this painful endeavor.