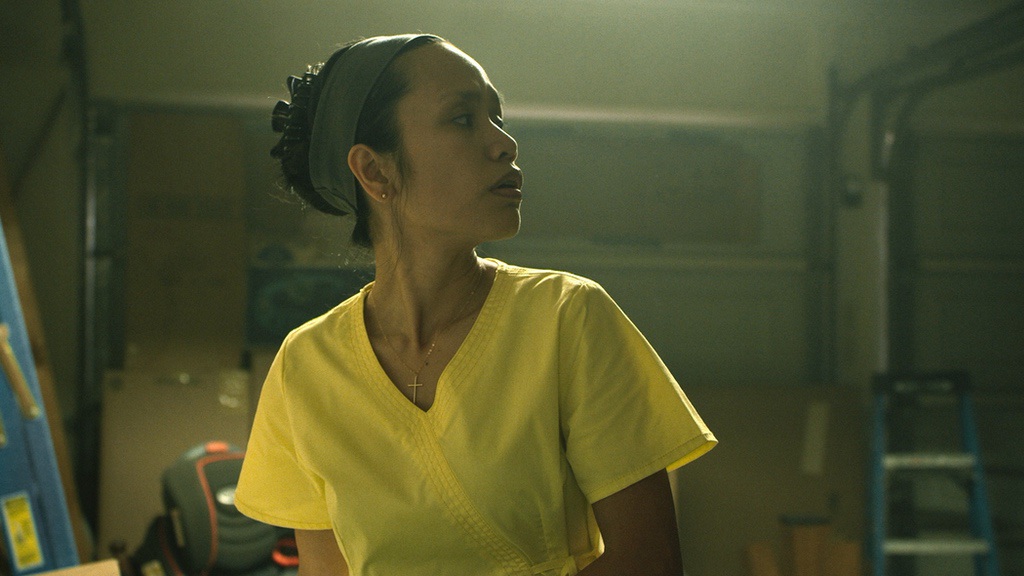 In Japanese, the term sanzaru refers to the mythical trio of wise monkeys who respectively hear, speak and see no evil, a concept that one can interpret as a denial of unwanted truths. This is the inspiration for the title for Xia Magnus’ horror film and is one of its most prominent thematic elements.

Taking place in a small town in Texas, Sanzaru stars Aina Dumlao as Evelyn, a hospice nurse who is hired to move into the home of Dena, an ederly woman who needs someone to attend to her medical needs until she passes from dementia. Evelyn’s nephew, Amos (Jon Viktor Corpuz), moves into the house too, after a fight at school caused him to get suspended. As the days progress, Dena’s mental state worsens, causing increasing amounts of stress in the home, but when unexplained events start to occur, Eveleyn begins to wonder if she’s starting to lose it or if something far more sinister is afoot.

Familial secrets are at the core of this haunted-house story — secrets carried by both families in the house. Their metaphysical manifestations  erode everything in their path as they violently eat away at the souls of the living. The only way to stop this malevolent force is to address these dark truths head on, but Evelyn must contend with a metric ton of chilling obstacles in order to get herself and her brother to safety.

Dena’s son, Clem, played by Justin Arnold, lives in a trailer behind the house and — while also seemingly harboring many of these secrets himself — is eager to help Evelyn, eventually sparking up a relationship with her. This slight plot thread never felt necessary or amounted to much in the grand scheme of things other than an attempt to show both individuals’ longing for companionship, something that was already evident within the performances themselves.

Magnus employs surreal imagery to represent the demonic apparitions that manifested in the home, successfully causing equal parts fear and dread, as we don’t know what this thing is at first but we can be sure it’s not there for benevolent reasons. These horror elements are more subdued than most mainstream haunted-house flicks, with most of the tension relying on the sound design and slight atmospheric visual cues, like the voices coming from the intercom in the house and the ever-present chirping of a smoke detector whose battery needs changing.

Adding to the mounting stress of the film is Dena herself, played expertly by Jayne Taini, as she begins becoming more unhinged. This is perhaps the most frightening aspect of the film, as dementia is a very real illness and one that many of us will encounter in our lives. Like the less compelling 2015 film Dementia, Sanzaru uses the disease as a conduit to cast doubt over the audience about what’s transpiring. We’re never really sure if what Dena is talking about or who she’s talking to is a sign of a supernatural force or if it’s all part of her disease.

Although it nearly doesn’t stick the landing, with things culminating abruptly and ending with less gravitas than the build-up had me anticipating, Sanzaru remains a thoughtfully crafted story that combines dread with melodrama to deliver a creepy, nuanced horror tale.