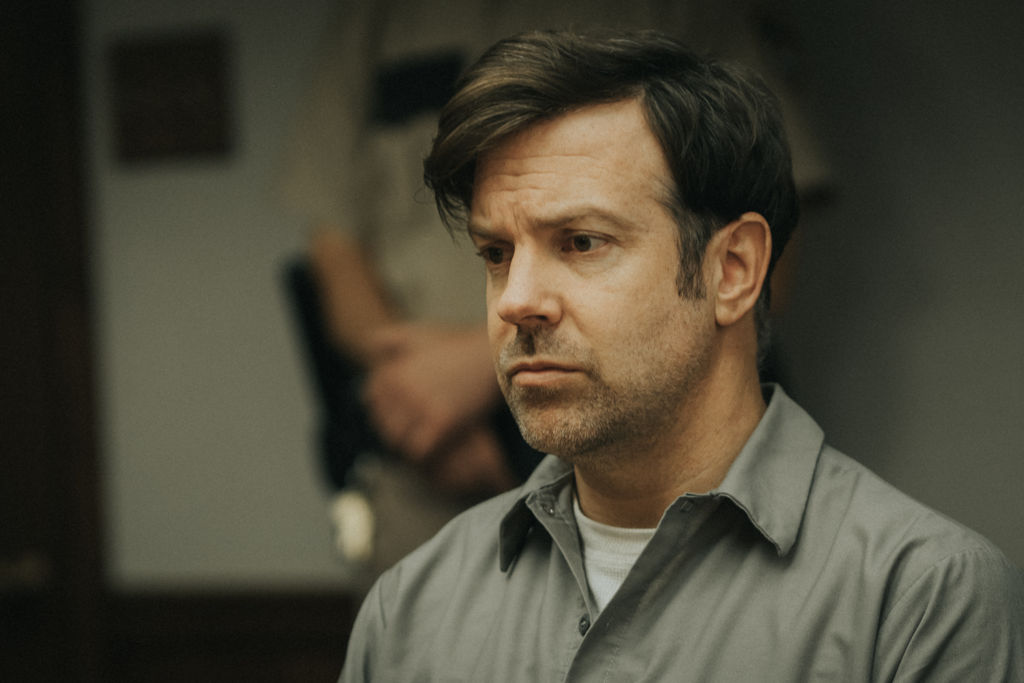 South of Heaven, directed by Aharon Keshales, begins like a stage play. Jimmy (Jason Sudeikis) sits at a table at his parole hearing and speaks with a judge who’s never seen. He’s just found out that his first and only love, Annie (Evangeline Lilly), has just been diagnosed with lung cancer and has a year to live. He’s served 12 years of a 15-year sentence for armed robbery but needs to get out to marry her and spend what little time she has left, together. Although there’s a back-and-forth with the judge, the scene feels monologue-like, as our full focus is on this man desperate for his love.

The judge grants parole and thus the rest of Annie and Jimmy’s love story continues, where she will always be a vulnerability, his kryptonite even, while her cancer will be used as a convenience. The disease is something that’s discussed, one whose treatment is weed despite the lung cancer, and she has very short hair, which is an easy signifier of past or current treatment without the messiness of digging into the nuances.

In the parking lot, after Jimmy first gets out, he tells Annie she looks like an angel and she jokes that she’s soon to be one. At home, they both take time apart to get ready for their first night, each struggling with the physical changes that have either slowly crept in, like the small bit of fat that’s gathered in his middle section, or been forced upon them, like the hair that doesn’t reach her shoulders. Jimmy and Annie just fit, as do Sudeikis and Lilly, who easily occupy their roles as a couple with a long history.

The only thing that could get in the way is Annie’s cancer, right? Wrong. The obstacles keep coming as Jimmy deals with a sleazy parole officer, Schmidt (Shea Whigham), who’s more an evil caricature with his macho energy, threatening nature and general grossness. He ropes Jimmy into one of his shady vague business dealings, where he has to retrieve money from some equally vague bad guys. What follows is a tragic series of events that ends up with both Schmidt and a crime boss after Jimmy. The plot goes off the rails, and it’s clear the biggest obstacle for this couple won’t be the threat of murder, the parole officer or even Annie’s cancer, but the pure sensationalism of events that pulls things too far out of the realm of reality.

The atmosphere of South of Heaven feels like an action movie shoved inside a drama with a love story and a life-threatening-disease crisis sprinkled on top, yet even its charming leads with palpable chemistry can’t dig their way out of this one.